Lockdown roadmap: is England’s exit plan the right one? Three experts give their view 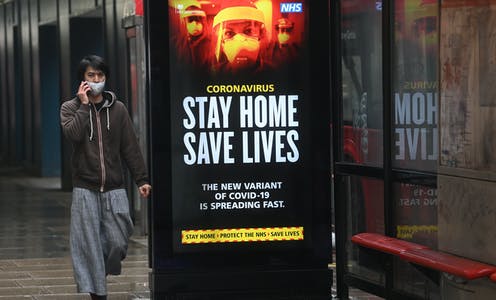 UK prime minister Boris Johnson has announced the steps his government will take to end England’s lockdown over the coming months.

Lifting restrictions will be split into four stages, with a minimum of five weeks between each to observe the effects of easing restrictions. Criteria – concerning vaccine rollout and effectiveness, infection rates and mutations – will need to be met each time the country is due to move onto the next stage.

Easing restrictions will begin with the reopening of schools on March 8. Here, three academics give their view on the government’s plans.

Without adequate control measures, the epidemic could rapidly escalate, overwhelming public health systems and necessitating painful lockdowns to restore control. With that in mind, the proposed phased release from lockdown, allowing the impact of each phase to be assessed before the next, is a fairly measured approach. There is, though, no zero-risk solution.

It’s right that schools are the first sector to open up: the adverse impacts of lockdown on children have been substantial, including the loss of learning opportunities. Reopening schools fully will lead to new infections, but this is to be expected and is not a cause for alarm. We know the disease tends to be mild in children.

The risk of school infections also reflects infection levels in the community. Falling infections across society mean schools are relatively safe. There are also generally fewer infections in children than in adults, so there is unlikely to be a significant impact on healthcare services. The decision to require secondary school pupils to wear face coverings in class is also a welcome measure.

Each phased lifting of restrictions will increase the infection risk. The key countermeasure to this is our vaccine strategy, as emerging evidence suggests the vaccines can prevent transmission as well as disease. Once those at greatest risk are covered, vaccines should target at those most likely to spread the virus

This could include younger adults, key workers and high-risk professions where there is more social mixing such as supermarket or hospitality industry staff. Such an approach could help drive down infections more quickly, offset the risks of opening up other sectors of the economy, and perhaps allow a quicker return to some semblance of normality.

Overall, the government’s plan for relaxing restrictions seems sensible. This plan implicitly recognises that despite worries about the new more transmissible variants of the virus, the current lockdown has been very successful in bringing down cases, hospitalisations and deaths. Slightly more so, in fact, than the UK’s first lockdown.

It is important to prioritise reopening schools after children and parents have shouldered such a heavy burden during the pandemic. I would have liked to see the reopening starting earlier and being phased-in as in Scotland. This has the benefit of getting younger children back into school earlier and testing how much additional virus transmission is added by some schoolchildren returning to the classroom.

It’s also welcome to focus the first relaxation of socialising rules on outdoor gatherings, as we know from research that transmission of the coronavirus outdoors is very rare.

The later parts of the reopening plan are ambitious, with many sectors of the economy (such as domestic travel and indoor hospitality) “back to normal” as early as May 17. This plan is sensibly subject to review. But with the vaccine programme progressing very fast – and the early evidence released today showing the vaccines are highly effective in preventing severe disease (though this still needs to be reviewed by other scientists) – an ambitious plan is warranted.

The stepwise easing of restrictions is prudent, and the four tests that need to be fulfilled are sensible. However, we are not addressing the thousands of new infections recorded daily in the UK, even under lockdown.

Why are we still recording over 10,000 new cases daily? We can’t simply fall back into our old practices and hope that the outcome will be different. For example, what extra steps are we taking to protect teachers and children before schools reopen on March 8? There is some early evidence that vaccines reduce transmission, but currently no plans to prioritise vaccinating teachers.

If we don’t tackle transmission, we will facilitate the faster emergence of dangerous variants and repeat last year’s experiences. Variants are unpredictable, but they take over their predecessors precisely because they have evolved advantageous traits, which arise as a result of new infections. If we don’t curb transmission, we will be forced to tighten our control measures again, and we can’t afford further lockdowns.

We have vaccinated a third of adults with a first dose, with plans to extend this to all adults in the next few months. Early, unreviewed data is showing that vaccine-induced protection from COVID-19 is holding true after a number of weeks, with people set to receive their second dose at three months.

But are there plans for a surveillance system to monitor how long immunity will last in vaccinated people? This will differ across age groups and in those with other conditions. How will we decide when to vaccinate again, to keep transmission down and protect our vulnerable? How will we know who has achieved immunity and who needs to continue to shield and receive further boosters? We need to plan for this too.

Peter Sivey and Zania Stamataki do not work for, consult, own shares in or receive funding from any company or organisation that would benefit from this article, and have disclosed no relevant affiliations beyond their academic appointment.