Why is race still in the British blood pressure guidelines? 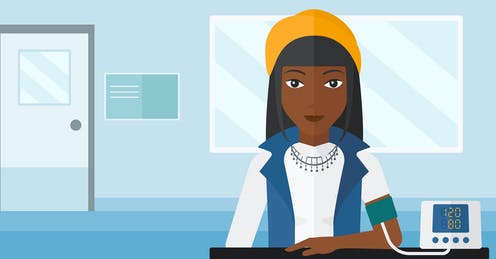 I looked around the lecture theatre and scribbled down what the lecturer had said: ABCD. ACE inhibitors (angiotensin-converting enzyme inhibitors), Beta blockers, Calcium channel blockers and (thiazide) Diuretics. These were the four groups of drugs used to treat high blood pressure (hypertension) – except there were exceptions.

We didn’t use beta blockers anymore and ACE inhibitors don’t work for black people, specifically black African or Afro-Caribbean people. The lecturer explained to us that all black people were inherently less likely to respond to ACE inhibitors. This is what I learned at medical school, and this is what medical students still learn today. Now, as a practising GP, this is the guidance we use every day (click to make them bigger).

Speculation on why black people have higher blood pressure than white people is often attributed to a genetic adaptation to slavery: specifically, salt retention allowed black people to survive long trips on slave transportation ships across the Atlantic Ocean. The implication that there are inherent biological differences between black people and members of other races has entered blood pressure medication guidance. Black people are labelled “low-renin responders” so are less likely to respond to ACE inhibitors. But there are several things wrong with this idea:

The reform of medical curricula is called “decolonisation” where the impact of history and colonisation is examined so medicine can better meet the needs of people who come from ethnic minorities. In a recent example, medical student Malone Mukwende wrote a textbook to help doctors recognise skin conditions on black and brown skin. This is significant since skin conditions in medicine are almost exclusively taught on white skin.

Where it comes to blood pressure research, a more holistic approach is needed to involve other sectors, such as genetics and social sciences. The UK blood pressure guidelines need to be re-examined as does much of medicine. This re-examination will challenge assumptions and the objectivity of medical research. This may fill some members of the medical profession and the public with dread as this adds to further uncertainty during a global pandemic. Perhaps this is the beginning of a change that will lead to a fairer health system for all.

I am an In-Practice Fellow supported by the Department of Health and Social Care and the National Institute for Health Research.

The views expressed in this publication are my own and not necessarily those of the NHS, the National Institute for Health Research or the Department of Health and Social Care.

I have not been paid any honoraria to promote Angela Saini's book "Superior: the rise of race science".