How parents should talk to their children about sex 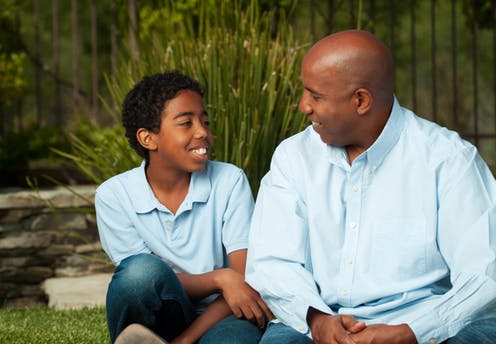 Parents and children need to be able to discuss sex – but often they avoid these conversations.

As part of our sex education research, we spoke to UK teenagers about why they don’t talk to their parents about sex. Visions of excruciating embarrassment topped the list. We also spoke to parents who didn’t know how or when to have these conversations, and teachers who reported severe difficulties engaging parents in the sex education of their children.

The good news is teenagers do actually want to speak to their parents about sex and there is evidence that doing so can have a positive impact on their sexual decision making.

The UK government has made relationships and sex education compulsory in secondary schools in England from September 2020, and government guidance recommends that schools engage parents in the process. Here are some tips that will help change these conversations from awkward to normal.

Some parents told us they hadn’t spoken to their teenager because they weren’t yet having sex. Really, though, these conversations should take place long before then.

A relationships and sexuality education expert who took part in our study shared a useful analogy to explain why. When children are small, parents hold their hands crossing the road, teach them to be careful, gradually increasing independence until they can cross by themselves. It would be silly to not mention the road at all until they were old enough to cross by themselves. This is the approach that should be taken to talking about sex. The earlier it starts, the easier it will be.

Both parents and teenagers report that it’s easier when these conversations start early and when parents talk about sex as they would anything else. Age appropriate conversations from early childhood are best. The golden rule is that if a child is old enough to ask a question, they’re old enough for an honest answer that doesn’t involve storks delivering babies.

However, even if parents have waited until their children have reached puberty, it’s not too late to start. It’s important to remember that both male and female parents have a role and that we must speak to our sons as well as our daughters. Boys are sometimes neglected when it comes to sex education, and there is evidence that some young people prefer to have these conversations with a parent of the same sex.

Many parents today will probably have received little or no sex education themselves. They may have only a vague sense of what they should teach their children and an even vaguer sense of how to go about it.

Teenagers today, however, who can ask Google anything, and will have sex education at school, have a fair idea that they’ve learned more about sex than their parents ever did. Teenagers know it and parents know it, and that can make talking about sex appear an insurmountable challenge.

If parents fear not knowing the answer to their child’s questions, there are plenty of workshops, books and online resources available. Many parents told us they learn together with their children by searching online when tricky questions arise.

Most parents feel uncomfortable about the prospect of speaking to their children about sex. Young people sense this and dread the thought of watching their parents sweat profusely while struggling to tell them things they already know. When they sense a “big talk” coming on they’ll avoid it like the plague. Then they’ll turn to teachers, older siblings, friends, the internet, pornography or anything else that doesn’t go scarlet at the thought of it.

It’s best to ditch the big talk in favour of teachable moments. This involves frequent, short conversations when, for example, an issue arises on television or a family friend gets pregnant. This will help avoid embarrassment and normalise talking about sex. Parents also suggest that talking in the car or on a walk helps ease embarrassment, as there is less need to make eye contact.

Teenagers in our research study were assigned an activity which involved speaking about sex with their parents. Most didn’t do it. When we asked why, they said they “couldn’t just bring it up at the kitchen table” – because, if they did, they expected a lecture, “You’re not at it already?” or “Don’t tell me you’re pregnant!”. They weighed their options and declined. We really couldn’t blame them.

When children ask a question about sex, it’s always best to listen rather than lecture. Parents should check why their child is asking and then answer as best they can, avoiding the temptation to follow up with a lecture. This will reassure young people that they can expect a nonjudgmental response in the future.

The research study mentioned in this article (The JACK Trial) is funded by the National Institute for Health Research (NIHR) Public Health Research programme, grant number NIHR PHR 15/181/01. Co-production of the JACK Trial animated films was funded by the Health and Social Care Research and Development Office (HSC R&D) of Northern Ireland. The views expressed are those of the authors and not necessarily those of the NHS, the NIHR, the Department of Health or the HSC R&D Office.