Coronavirus: why central and eastern European countries seem to be running out of luck 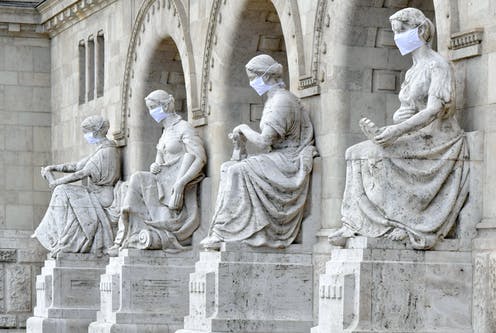 The number of new COVID-19 cases in the Czech Republic recently surpassed 3,000 in a single day. As infections rise across Europe, the country, which has a population of 10 million, has regularly seen daily case numbers overtake records from March and April.

Other central and eastern European countries also faced much larger outbreaks over the summer than in the spring. Romania’s capital city ran out of COVID-19 beds in mid-July. Central and eastern Europe managed the first wave of COVID-19 in the spring well – to general surprise – but governments have since struggled. They have found it politically difficult to reintroduce restrictions after months of letting their populations live normally.

Central and eastern European countries emerged as unlikely champions of Europe’s first wave. Their total death rates have been far lower than in larger and richer western European countries. This was unexpected since the region’s health systems are underfunded and understaffed compared to the west. Governments also have less capacity to design and implement public policies.

What’s more, many of these countries are led by populist leaders, who are generally thought to disregard scientific expertise and take decisions based on the whims of public opinion. Populist leaders in the United States or Brazil certainly conformed to that stereotype.

Not so in central and eastern Europe, though. In a forthcoming book chapter, we compare the response of three central and eastern European countries with populist governments: the Czech Republic, Hungary and Bulgaria. In all three countries, populist leaders quickly imposed lockdowns and other strict measures to protect public health. They quickly established themselves as responsible, rather than purely responsive to public opinion.

Their success, however, has been been tempered by their failure to provide economic support to their populations and attempts to use the pandemic as cover for power grabs. The general public, meanwhile, has become less supportive of anti-COVID-19 measures. And since populist governments are exceptionally sensitive to negative public opinion, this has led them into tricky situations when it comes to living with COVID-19.

Austerity comes back to bite

Compared to the often generous furlough schemes and universal benefits in western Europe, central and eastern European governments did little to help their populations affected by lockdowns in the first wave. Instead, they chose to continue years of austerity policy.

Viktor Orbán, the Hungarian prime minister, refused to relax his “workfare society” policy, which severely limits unemployment benefits unless people participate in some form of work. He suggested that people who lost their jobs due to COVID-19 should join the army instead of demanding state support.

Furlough schemes (as well as lump sums to the self-employed and zero-hour contract-workers) proved relatively timely and popular in the Czech Republic but were “too late and too little” in Bulgaria and Hungary. Access to government support was subject to heavy administrative burdens in all three countries. In Bulgaria, for example, parents had to fulfil multiple separate conditions to access a one-time payment of around €190 (£174).

Anti-COVID-19 measures were often introduced without substantial scrutiny by the public or the opposition. In Hungary, the government authorised itself to rule by decree indefinitely, without parliamentary scrutiny.

Arbitrary government decisions were also taken in the Czech Republic and Bulgaria, where leaders repeatedly overruled expert recommendations as infection rates rose in the summer.

Governments’ exceptional powers present a challenge for democracy and accountability in other countries, too. But increased concentration of power in governments’ hands is especially problematic in central and eastern Europe, where the threat of democratic backsliding and disregard for the rule of law and parliamentary control is politics as normal.

Once lockdowns relaxed, many central and eastern European governments found it difficult to reimpose even less intrusive anti-COVID-19 measures despite rising infections. In Bulgaria, for example, prime minister Boyko Borissov re-opened night clubs only a few days after his health minister closed them due to pressure from the industry and public disapproval.

Czech prime minister Andrej Babiš blocked his health minister’s plan to reintroduce facemasks indoors even as cases started to skyrocket in August. He later admitted the government had relaxed nearly all public health measures due to “high societal demand”.

Opinion polls suggest he is right: only 20% of Czechs supported strict public health measures in September, as opposed to 45% in April. Renewed restrictions are likely to be unpopular everywhere but the Czech and Bulgarian governments’ hesitation suggests populist leaders find them especially politically costly.

Victims of their own success?

The early success of central and eastern European countries in containing COVID-19 now appears to be a double-edged sword. Low death rates in the first few months may have led the population, as well as politicians, to underestimate the threat. The Czech, Hungarian and Bulgarian governments did not use the time they had gained in the spring to put in place adequate test, trace and support systems.

The countries’ leaders consistently downplayed the significance of the virus in official government communication throughout the summer, suggesting that their new-found status as “responsible populists” in the spring may have been only temporary.

2020-09-18
Previous Post: The EU is on a collision course with Poland over hate crime
Next Post: Lebanon protests: Authorities prey on digital spaces to silence criticism · Global Voices