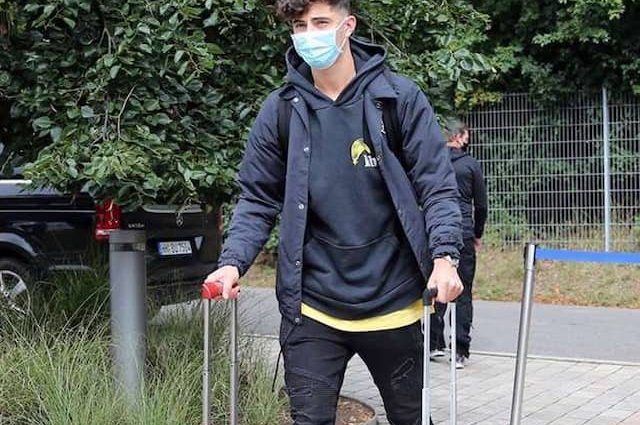 Kai Havertz has flown to London, reportedly for his Chelsea medical.© Twitter


Kai Havertz left the Germany camp on Friday to travel to London to finalise his transfer from Bayer Leverkusen to Premier League side Chelsea, reportedly costing around 100 million euros ($120 million). Ahead of Sunday’s away Nations League match with Switzerland, Germany head coach Joachim Loew allowed the 21-year-old to leave their camp to settle the details. “Of course, we would have preferred if he could have fully concentrated on the national team, but we are aware of the importance for Bayer Leverkusen and Kai,” Germany team director Oliver Bierhoff told the German FA website.

Havertz jetted to London, reportedly for his Chelsea medical, after being on the bench for Thursday’s 1-1 draw against Spain in Stuttgart.

Leverkusen sports director Rudi Voeller said they are “grateful” to Loew that “Kai can now clarify things, with our support, on site in London”.

After scoring 46 goals in 150 competitive games for Leverkusen, Havertz is set to join his Germany team-mate Timo Werner, who signed for Chelsea in June from Bundesliga side RB Leipzig for 53 million euros.

If the transfer goes through, Havertz will eclipse Werner as Germany’s most expensive footballer.

Loew said Havertz was “torn” between Germany duty and completing the transfer.

“He absolutely wants to take this step,” added Loew, who acknowledged “the importance and scale of the move”.

Havertz’ arrival will be a big boost to Chelsea, who have also signed Hakim ZIyech earlier from Ajaz, and Thiago Silva from PSG.

2020-09-05
Previous Post: Lionel Messi Says He Is Staying At Barcelona | Football News
Next Post: Why Do French and Italian Tomatoes Taste So Damn Good?