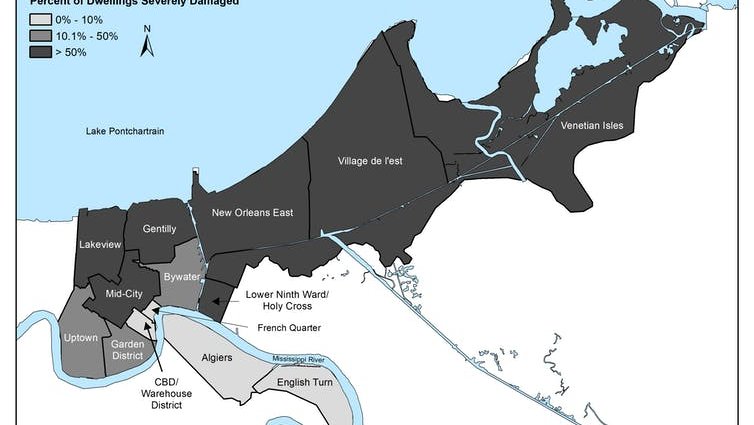 Hurricane Laura’s landfall on the coasts of Louisiana and Texas came just as New Orleans prepared to mark the 15th anniversary of Hurricane Katrina, and with the region already reeling from the coronavirus pandemic. For many, the wounds of the COVID-19 disaster and now Hurricane Laura are all too reminiscent of the way the US handled the devastation of Katrina.

Just as we are now, in 2005 we reimagined the future of society. As my 15-year study of post-Katrina New Orleans shows, Katrina offered lessons about how to design a more just and effective criminal justice system. We would be wise to finally heed them.

Because of the focus on investing in police and prisons to address the problem of crime in the US, to the neglect of housing, job training, and mental health and addiction treatment, the country has largely set former prisoners up to fail. Unsurprisingly, for decades, roughly 50% of formerly incarcerated individuals have been sent back to prison within just three years of release and almost 70% are rearrested. Prisons are overflowing not so much with first-time offenders, but with people who return again and again.

At the point of release, because of limited housing options and restrictive parole policies, the formerly incarcerated tend to funnel right back to their old neighbourhoods. Returning home often means returning to the same environment with the same criminal opportunities and criminal peers that proved so detrimental prior to incarceration.

This was the story of numerous people I interviewed as part of my study, including one man from New Orleans named Vernon. He’d go to prison and eventually exit with a sincere intention to change. After the third of his four imprisonments, he found God, devoted himself to religion, attended drug treatment, and made a legitimate commitment to change. But just like the times before, he fell victim to the temptations of his old environment, relapsed into active addiction, and ended up back in prison. He followed a similar pattern after his fourth incarceration.

Hurricane Katrina then struck, and Vernon was forced to leave New Orleans behind. He has avoided crime and drugs ever since.

One prominent strand of thought in criminology is that crime is situational: certain situations and social contexts are more likely to breed it. Change someone’s situation, and the outcome may be different.

To test this idea and to make sense of why Vernon’s life changed, I compared reincarceration rates of every prisoner originally from the New Orleans metropolitan area who was released in the first six months after Hurricane Katrina to every New Orleans prisoner released a few years prior to Katrina. Because the tragedy of Katrina forced many people to move to new cities who otherwise would not have moved, we got a glimpse into the alternate reality of their lives – a natural experiment for social scientists.

It turns out that those people who were forced to move elsewhere because of the hurricane were much less likely to be subsequently reincarcerated than their pre-Katrina counterparts who went back home. In the first eight years after their release, an estimated 46% of the people who moved to a different parish were reincarcerated at some point, still a high percentage but much less than the staggering 59% reincarcerated among those who returned home.

Distance was key in order to provide a true change in circumstances. Moving a short distance to the next neighbourhood over did not reduce reoffending nearly as effectively as moving to an entirely different city or parish.

In a later study, I sought to replicate the results of my Katrina study, without a hurricane. I ran an experimental pilot housing programme in the Maryland prison system called MOVE (Maryland Opportunities through Vouchers Experiment).

We provided six months of free housing, privately funded through a research grant, to people who had been newly-released from prison, with the housing located in a different county from their former home. They were free to live alone or with family members, and we increased the value of support for people living with dependent children in order to offset the cost of a larger dwelling.

The combination of free and stable housing and a new environment had a substantial effect. Only 25% of our participants were rearrested within one year of their release from prison, compared to 57% in a control group who returned to their former counties without any kind of housing assistance.

How to pay for rehousing

But how could we pay for housing programmes for former prisoners? Even before the current financial crisis, only about a quarter of all families eligible for federal rental assistance, such as housing vouchers or public housing, actually received it.

One answer is a long-discussed criminal justice strategy: justice reinvestment. The idea is simple – redirect a portion of the savings from the reduced use of incarceration to pay for housing for newly released prisoners.

It turns out that it is much cheaper to house someone on the outside than it is on the inside. It costs well over US$100 a day in many states to incarcerate someone. In contrast, according to the US Department of Housing and Urban Development, the fair market rent for a one-bedroom apartment in Baltimore, the site of my MOVE programme, is US$1,105 per month. At around US$37 per day that’s about a third of the cost of prison. The savings could also pay for support services such as drug treatment, cognitive behavioural therapy and job counselling.

As the movement to defund the police progresses and alternative strategies to address public safety are being considered besides the police and prisons, investment in housing should be a key priority. At a time when cost-beneficial public spending is essential for the recovery from the pandemic, over-reliance on costly and, in many cases, unjust criminal justice practices is not sound policy.

* Names have been changed in this article to protect the anonymity of the research participants.

David Kirk received funding from the US National Institutes of Health for the purposes of this research. Findings and conclusions expressed are solely the author's.

2020-08-28
Previous Post: Are women leaders really doing better on coronavirus? The data backs it up
Next Post: From Spent Grain to Fresh Bread