Pupils in England and Wales head back to school: how teachers feel about the return 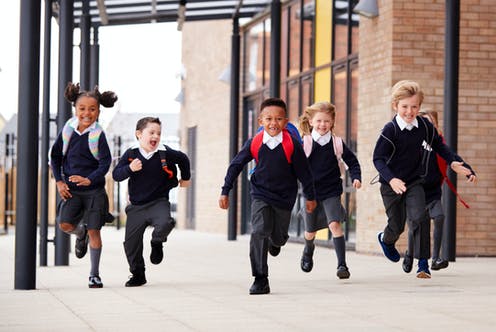 School closures across the world as a result of the coronavirus pandemic have caused significant disruption to the education system at all levels, affecting children, parents and school staff.

Now, the closures across the UK are ending. Children went back to schools in Scotland from August 11 and in Northern Ireland from August 24, and England and Wales are set to follow in the first week of September.

Many of those who took part in the survey felt that children need to return to school. Some children returned to school for a brief period in July, and teachers felt that the time away in the spring and summer had resulted in a decline in their ability to learn and their social skills. A teacher discussing pupils who had returned in July after school closures said:

They have come back to school tired. They have found it difficult to concentrate. Some are not used to following rules at home and so following instructions and rules in school will be difficult and therefore disruptive behaviour will follow.

Concerns over pupils’ health and wellbeing were discussed primarily in relation to the indirect effects of the virus. Teachers commented on how the experiences of children during lockdown would have varied widely. They spoke of the challenges of supporting them both emotionally and with their education when they return, especially those disengaged from learning:

I feel we may be picking up the pieces in terms of the pupils who have not been engaging and have not returned for pre-summer check-ins.

Our survey showed that teachers were worried that some children would have engaged in home schooling and some not. This would lead to a widening of the ability gap between children in the same class, making whole-class teaching very hard.

A teaching assistant told us that a particular challenge would be ensuring that enough staff were on hand to help the children who had fallen behind in learning and social skills.

The school staff noted, however, that there would have been positive aspects of lockdown for some children, including more time with family and the development of life skills such as cooking and learning to ride a bike.


The school staff we spoke to were also worried about staff health and wellbeing, especially about the risk of children passing coronavirus to adults. This was raised by school staff who had been shielding or were living or interacting with those who were shielding.

Staff were also worried about looking after their own children, with limited breakfast or after-school clubs available. Headteachers specifically raised concerns over potential staff shortages because of staff sickness and those needing to self isolate due to symptoms, and the implications this would have on school budgets.

Challenges to the management of the school day were raised, as new practices like extra cleaning and handwashing would need to be added in. Staff raised concerns about how this would lead to reductions in valuable teaching time.

Maintaining good hand hygiene with a full class of 30 will be very difficult to monitor and very time consuming.

Another challenge relayed was the ability to teach and collaborate with others at a social distance, particularly for those teaching younger pupils. School staff were also concerned about the lack of social interaction between staff as a result of social distancing.

Staff commented on the benefits of smaller class sizes for pupils. It was noted that some children “thrived” in smaller groups when they briefly returned in July.

Staff felt that smaller class sizes could not only reduce the risk of infection but also greatly improve the ability to support individual children and improve wellbeing for staff. A headteacher suggested that these experiences could drive a long-term change in education.

Due to budget constraints we have had large classes to keep jobs – now is the time to invest in learning – class sizes no greater than 20. This will have a massive impact on pupil learning.

Also, staff proposed there should be more support for wellbeing and the arts and less pressure on assessment, with one teacher suggesting that there should be designated staff in each school to help with wellbeing. The need for a greater focus on the wellbeing needs of pupils has been highlighted in our previous research, and will be ever more critical in the current situation.

It is clear that investing in both pupil and staff wellbeing will be essential for a successful return.

Sinead Brophy receives funding from Health Care Research Wales, ESRC and HDRUK. This work was funded by Welsh Assembly government and the NIHR.

2020-08-27
Previous Post: Disinformation about Belarus spreads in the Balkans via online portals and social media · Global Voices
Next Post: How worried should we be about the coronavirus resurgence in Europe? Three experts weigh in