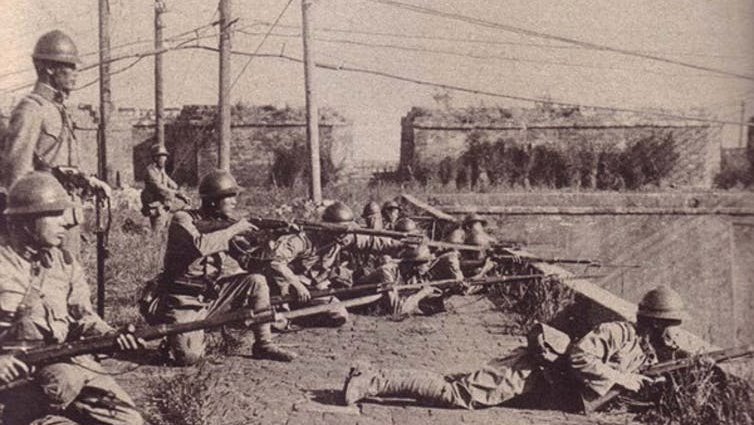 The coronavirus pandemic has inflamed existing tensions between China and the US. China blamed the US for spreading the virus across international borders while the US president, Donald Trump, continues to focus the blame on China by referring to COVID-19 as the “China virus.” Tensions between them have also mounted over the fate of Hong Kong and the South China Sea.

My research, done in collaboration with Joshua Jackson and George Williford, suggests that similar, although far less dramatic, moments of uncertainty have led to increased military tensions between rival countries.

A rapid shift in relative military power, a rival state obtaining nuclear weapons, or changes in leadership and economic crises can generate uncertainty between enemies as their resolve to fight is put to the test. In the international system, uncertainty is dangerous and can lead to war – but it can also create opportunities for peace.

To clear up uncertainty about their rival’s motives, countries often issue threats to send a clear and credible message to their rival that they are committed to continuing a particular dispute. By sending a militarised threat, they also force their opponent to either resist and keep fighting – or to concede. There are numerous examples of this playing out throughout history, which can help us understand what might happen today.

Read more:
South China Sea: after all its posturing, the US is struggling to build a coalition against China


China, Japan and the Great Depression

The uncertainty created by the Great Depression in the 1930s intensified rivalries throughout the world, perhaps none more so than between China and Japan. The two countries were engaged in a longstanding rivalry that stemmed from a dispute over the region of Manchuria.

In 1930 and 1931 Japan experienced one of the largest economic downturns in modern history. The Japanese government took decisive steps to prop up its economy and the country’s industrial production grew by 10% in 1932 alone. But China’s economy was devastated by the impact of the Great Depression and experienced a prolonged economic downturn which left it politically divided and economically weak.

While Japan and China had tested each other before in the 1920s with few real consequences, after the onset of the depression Japan increasingly sought to signal its resolve and test a weakening China to see if it was willing to continue the military rivalry. It used militarised threats to do this and found China increasingly unwilling to and unable to offer a coherent response. Ultimately, Japan invaded Manchuria in 1931 and China conceded.

Brink of war in Cuba

The Cuban missile crisis – a nuclear standoff between the US and the Soviet Union that took place over 13 days in October 1962 – was also a result of uncertainty. In this case the then US president, John F Kennedy – who had only taken office at the beginning of 1961 – was still an unknown entity. He appeared to be weak – new leaders are often thought to be weak and ripe for “testing” by rivals. Kennedy had authorised a failed invasion of Cuba in 1961 and was embarrassed by the Soviet leader Nikita Khrushchev at a summit in Vienna in 1962 due to his inexperience and lack of preparation.

The uncertainty surrounding the Americans’ ability and willingness to stand up to Soviet pressure were central to Khrushchev’s decision to install nuclear weapons in Cuba. The Soviet Union’s attempts to clear up the uncertainty at the outset of the Kennedy administration led to a period of heightened tensions that came frighteningly close to escalating into a full-scale nuclear war.

The crisis was fortunately de-escalated thanks to skilled diplomacy. The Soviet Union found that the US and the Kennedy administration still had the willingness and capability to maintain the rivalry.

Continued deaths from COVID-19 as well as the political and economic fallout from the pandemic have created a moment of great uncertainty. Our research suggests that what makes this moment especially dangerous is that many of the economic and political costs have not been evenly distributed, and some countries and their leaders have been hit harder by the coronavirus pandemic than others. This is especially true for the rivalry between the US rivalry with China, which is now in a much stronger relative position regarding the number of COVID-19 cases and the state of its economic recovery.

The Trump administration’s response to the crisis has been chaotic and economically catastrophic, and has deepened existing political divisions. This is likely to have raised doubts in Chinese leaders’ minds as to whether or not the US is willing and able to keep disputing the issues – ideological and economic – that are the basis of its rivalries around the world. These doubts have led to an escalation between the two countries.

But research shows that moments of great uncertainty and political shocks make it more likely that global rivalries end. For example, the economic and political collapse of the Soviet Union led to the end of the US-Soviet rivalry as well as smaller rivalries around the world. This may yet be a longer-term consequence of the coronavirus pandemic too.

Douglas B. Atkinson does not work for, consult, own shares in or receive funding from any company or organisation that would benefit from this article, and has disclosed no relevant affiliations beyond their academic appointment.

2020-08-19
Previous Post: In eastern Sudan, a bloody intercommunal conflict raises national security concerns · Global Voices
Next Post: The combination of dementia and domestic abuse is all too often overlooked