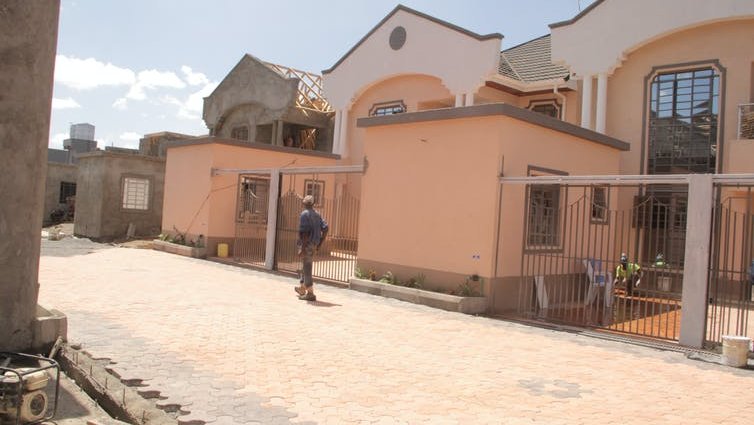 “Today I woke up late, because there was nothing I was doing,” Wilfred* wrote in his diary. Like many of his peers, the 21-year-old lacks permanent employment, seeking small amounts of cash from odd jobs carried out in the town where he lives on the northern outskirts of the Kenyan capital, Nairobi.

My friend called me and told me we go for a job that he was given by his neighbour. It was for cutting grass, sweeping the compound and carrying stones. It was a hard work but less money. We were paid 500 Kenya shillings (£3.60).

In 2017, during research carried out for my doctorate in social anthropology, I had distributed diaries to a group of 12 young men aged 21 to 30 in northern Nairobi with the aim of understanding the rhythms of their lives on the economic margins.

Like Wilfred’s entry, these diaries revealed lives of joblessness, begging, piecemeal labour and endless searching for money, all punctuated by substance use. Many smoked cannabis and chewed mũgũũka, cheap khat leaves sold at 50 shillings a bag.

But what also emerged were their dreams of accruing vast wealth, to one day become wildly rich. As 21-year-old Henry wrote:

Today I woke up having a good feeling of how the day is going to be a perfect day for me, having dreamt of how rich I was going to be.

Henry’s words are a reminder that for those on the economic margins, material wealth has a powerful allure. The diaries also showed how some young men seek to access that wealth by criminal means.

Kenya has sometimes been described as a “hustler nation”. More than 80% of the population work in the informal economy, deriving incomes from hawking goods, fixing cars and working on construction sites.

These are often precarious and piecemeal arrangements, impermanent and low-paid –characteristic of what has been called an era of jobless growth, in which GDP rises without reducing unemployment. This is a problem experienced most sharply by the young, consigned to moving around in search of cash, all the while providing easy targets for police extortion.

But at the same time, Kenya is also a landscape of aspiration and luxurious wealth, particularly on the outskirts of Nairobi where the city’s urban sprawl is stretching out into poorer peri-urban areas. Shopping malls rise out of the landscape like fortresses.

Gated communities and apartment blocks spring up regularly, targeted at Nairobi’s “working class” – the permanent salaried workers. It is here that poverty and wealth coexist in a landscape of inequality, in which Kenya’s rich and poor live side by side.

To ‘get rich quick’

It was in 2017 and 2018, while conducting fieldwork on Nairobi’s northern outskirts, that I began to take an interest in the effects of this landscape of social stratification on the desires and hopes of those living on the economic margins. What I found is that Kenya’s hustlers don’t only contend with the constant problem of making ends meet, but also with their frustrations – that they will never access the wealth they glimpse in the world around them.

“You know most of us guys ain’t got no patience,” Cassius, one of my interviewees and diarists, once told me. At the age of 22, he had just opened a shop opposite the main thoroughfare in his town on the outskirts of Nairobi with the help of his parents. He hoped to leave the street, where he had been hustling since leaving secondary school.

Most of us guys see those rich guys … like I’ve got some friends living at Crystal Plaza, these apartments near the market paying 15,000 shillings rent [about £110 per month]. 15K! And I’m working the whole month to see that much. You start to lose hope.

“We like comparing ourselves with people whose lives we can’t reach”, Iregi, a 24-year-old man from Nairobi’s northern outskirts, explained to me. We had been talking about his former life as a petty criminal, and his motivations for robbing pedestrians at night. His reasons were grounded primarily in frustration: “Why can’t I get my money from them? So you take advantage … beat up people.”

Cassius, who also used to dabble in petty crime, explained he had done so to be on the “level” of other wealthy young Kenyans who could enjoy lives of conspicuous consumption. Spending stolen money on alcohol in local bars allowed men like Iregi and Cassius to experience short-term abundance, but only until the following day, or when the police began searching for them.

Theft allowed some of these men to temporarily imagine they were richer than they really were. Such acts of rapidly accumulating money for immediate consumption underscore the stark inequalities of contemporary Kenya. They show that the economic lives of the poor are not simply structured by their limited means but by their desires and aspirations – that acts of crime are animated by desires to imitate wealth and the ease it affords.