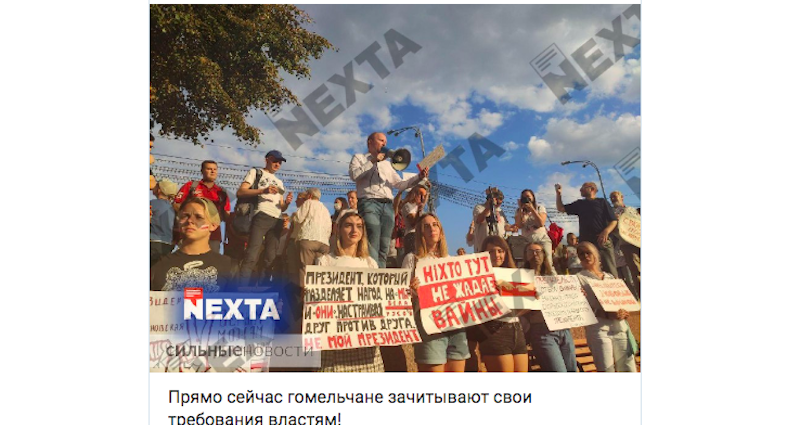 An example of a recent post on Nexta Live, showing protesters in the city of Homel reading aloud their demands to the authorities. This post was viewed over half a million times. Screenshot from Nexta Live / Telegram.

It seems that everybody in Belarus follows Nexta Live. During the first days after the country’s presidential election, when the entire country went nearly completely offline, this channel on the Telegram messenger service was one of the only sources of information about an escalating political crisis.

That crisis was triggered by President Alexander Lukashenka’s bid to secure a sixth term in office in elections on August 9. According to official results, Lukashenka received 80 percent of the vote compared to just 10 percent for his challenger Sviatlana Tsikhanouskaya. Belarusians and international observers alike suspected mass electoral fraud, leading thousands of voters to take to the streets in protest and workers across the country to declare strikes. Riot police responded with extreme violence, detaining over 6,000 protesters.

But protesters have kept up the pressure. On August 16, tens of thousands of Belarusians gathered in the capital Minsk in what may well have been the largest demonstrations since the country gained independence in 1991. They now demand nothing less than Lukashenka’s resignation. But the president says he’s going nowhere; the next day, before a jeering crowd of factory workers, Lukashenka vowed not to hold a re-run of the election “unless you kill me.”

Belarus’ opposition activists and independent journalists have good cause to fear those words. Since becoming president in 1994, Lukashenka has ruthlessly cracked down on all resistance to his rule and on media freedoms. Domestic and international journalists alike have been beaten and detained during recent protests.

With so many obstacles to newsgathering on the ground, Nexta becomes an even sharper thorn in the authorities’ side. The channel has circulated footage of police attacks on peaceful protesters, striking workers’ political demands, and photographs of what it alleges are “real” voting tallies from polling stations across the country.

That content has got Nexta noticed. If at the start of August the channel had more than 300,000 subscribers, it now has over two million — not a trivial number in a country of around ten million.

In fact, that makes Nexta one of the most popular Telegram channels in the world. And the Belarusian authorities have noticed; that’s why on August 14, the country’s police opened a criminal case against Nexta’s founder Stepan Putsilo, who lives in Poland, on charges of “organising mass riots” and calling for the overthrow of the Belarusian government.

A tale of two countries

“It was just a hobby. I made funny videos for my family. Then I decided to gather all the trash from Lukashenka’s Belarus,” explained the 22-year-old Putsilo in an interview with Charter97, a Belarusian human rights website. Thus Nexta, whose name comes from the Belarusian for “somebody,” was born in 2015. Initially it was a YouTube channel, where Putsilo and his friends would share reflections on social issues in Belarus alongside their satirical songs with an anti-Lukashenka message.

The lyrics of one such song from 2015 would not be out of place at a protest rally in Minsk today:

Putilo did eventually find a way out of Belarus — with a one-way ticket. In his Charter97 interview, Putilo recounted that he returned once in 2018 to visit his family. However, upon learning that his apartment had been searched by the security services, he has not been back since. Nevertheless, Putilo is one of several opposition-minded Belarusians based in their country’s neighbour to the West. The Polish capital also hosts Belsat, a Belarusian-language news channel which is critical of the Lukashenka government (The Nexta founder is the son Alexander Putilo, a Belsat journalists, and writes articles for Belsat himself under the name Stepan Svetlov.)

Nexta’s prominence only grew despite, or perhaps due to, its founder’s exile. In February 2018, the Belarusian authorities opened a case against Nexta for “insulting the president” in critical YouTube videos. That autumn, Nexta moved onto the Telegram messaging service, and most of its YouTube audience followed.

The channel’s output also became increasingly professional. In April 2019, Nexta was the first source to report on the murder of a traffic policeman from the Belarusian city of Mogilev; the information it provided later formed the basis of journalistic investigations. Then in October 2019, Nexta released its first professional documentary — “Lukashenka: Criminal Materials”, which told the story of how the current Belarusian president rose to power. The film attracted nearly three million views on YouTube; the Belarusian authorities denounced it as “extremist.”

This growing following eventually gave Nexta a funding model in the form of paid advertisements, which disappear from its feed after 24 hours. Its editors recently told the Russian version of Esquire Magazine that Nexta has not received grants from any organisations or governments, and survives exclusively from this advertising revenue and donations from its readers.

By the time Belarus held its 2020 presidential election, Nexta had become an essential source of information for any serious observer of Belarus. The project’s decentralised structure, featuring profiles on multiple social media platforms but no website, was ideal in building up this following — but led to an immense volume of submissions. Hundreds of anonymous users were sending information, photos, and videos to Nexta’s channels. There was so much that Putsilo was compelled to hire three colleagues to sift through the submissions from his home country.

They would soon be working overtime.

An army of somebodies

Nexta maintains three Telegram channels: Nexta, Nexta Live, and Luxta (which mostly shares satirical posts). During the height of the protests in the days following the presidential election, Nexta Live was publishing hundreds of messages every day, many of them including content provided by anonymous users with only the most cursory contextual information. Each post now has a million reads on average.

But in recent days, Nexta has also circulated texts of protesters’ demands, updates about arrests, locations of arrests by riot police, and contacts for lawyers and human rights defenders. It is clear that the channel does not merely report on the protests, but has played a substantial role in organising them:

Despite criticism from some quarters, Nexta’s editor-in-chief Roman Protasevich does not see a contradiction between this overt political agenda and conventional journalistic ethics. The 25-year-old journalist recently joined Putsilo’s team, and has now received political asylum in Poland. Speaking on August 12 with the prominent Ukrainian journalist Dmitry Gordon, who had interviewed Lukashenka a few days before, Protasevich denied that Nexta could be described as the main coordinator of the protests, though acknowledged that he and his colleagues had been forced into the spotlight as key opposition figures:

In principle, this isn’t something which can be coordinated, particularly not in a country which is cut off from the internet, where yesterday there wasn’t even mobile internet. It’s impossible to somehow direct the crowds. That’s one point. Furthermore, we fully comprehend the responsibility which lies on our shoulders. We have an incredible resource, we’re widely recognised, and hundreds of thousands of Belarusians have put their trust in us. We understood that at some point, we had to move beyond concepts of non-interference if only for the simple reason that we are also Belarusians, and we are all people who have lived under a dictatorship for many years. Many, particularly young people, have lived under Lukashenka since the day they were born. Something has to be done about that. Yes, I understand that over the last few days we have entirely violated some journalistic ethics, some ethical rules of the field, but it’s important to understand that we are not just journalists, we are human beings. And we really do want change for the better. We’d like to return home ourselves some day […] We are Belarusians, just like everybody else, and we are trying to do all in our power to ensure that Belarus has rotations of power and that elementary human rights were respected in the country, so that there is some freedom of speech in Belarus.

Protasevich did not respond to GlobalVoices’ request for comment. However, his words above make his view clear: when journalists face pressure from the authorities, they are ethically obliged to push for freedom of expression — even if that means abandoning the pretence of impartiality.

There can be no doubt that Nexta and a handful of other Telegram channels have played a crucial role in informing the world about the turmoil in Belarus after the election. However, some observers voice discomfort at depending too much on these sources. The information they share is fragmentary, anonymous, contextless, and despite the best efforts of its editors, some of it appears to be unverified. For example, in the early hours of August 10, Nexta reported that the 35-year-old Yevgeny Zaichkin had died during clashes with police in Minsk. As it happened, Zaichkin was wounded but survived.

Perhaps unsurprisingly, these concerns are shared by editors of older Belarusian publications whose readerships now pale in comparison with Nexta. Anna Kaltygina, an editor for one of the largest Belarusian news websites Tut.By, told the Russian radio station Ekho Moskvy on August 12 that she doubted whether it was possible to seriously fact check events on the ground in Belarus from faraway Warsaw. However, one can also ask whether it is possible to report seriously from the ground in Belarus given the authorities’ harassment of journalists in recent weeks and generally poor record on press freedom.

In this context, a media source which relies on anonymous content has practical merit. Kaciaryna Šmacina, a Research Fellow at the Belarusian Institute for Strategic Studies, told GlobalVoices that Nexta and other Telegram channels rose in prominence at just the right moment:

Right now the Belarusian protests are leaderless, and for the moment this is probably for the good. We have no leader in Belarus who would take charge and channel those protest moods, because if he or she were there, they would have at the very least been thrown out of the country like Tsikhanouskaya or put in jail. And in such a repressive context, these Telegram channels are something very new, allowing people to coordinate themselves and organise protests. They are an important tool and source of information, but at the same time I think it’s very legitimate to ask who are the coordinators of these channels, particularly if they call on people to resist the police.

Telegram confounds autocratic rulers in the post-Soviet space, where its use is particularly widespread. This year, the Russian authorities abandoned an attempt to ban the messaging platform; the internet outages in Belarus also failed to silence Nexta and other popular channels. As Deutsche Welle noted this May, Lukashenka has denounced Telegram with ever greater frequency this year. He has continued to do so during the protests; It is not implausible that he had Nexta in mind.

It’s now possible that other sources of information will be available for those watching developments in Belarus. On August 17, state television employees went on strike, no longer content to tow the government’s line against the protesters.

This is what this morning’s state TV show looked like:pic.twitter.com/IonISHw8bh

These developments are extraordinary, but Šmacina cautions against a false sense of security where freedom of expression is concerned. “Everybody who speaks up against the regime or criticises the regime is still in danger, and this danger hasn’t gone anywhere. Lukashenka is not close to relinquishing power, and my main concern is that we will see even more ugly scenes.”

Until and unless something cardinally changes in Belarus, it is likely that ordinary Belarusians will continue to opt for anonymity when they speak out — and seek out Nexta when they do so.