From Lenin to Putin: Russia’s turbulent history as told by the foreign press 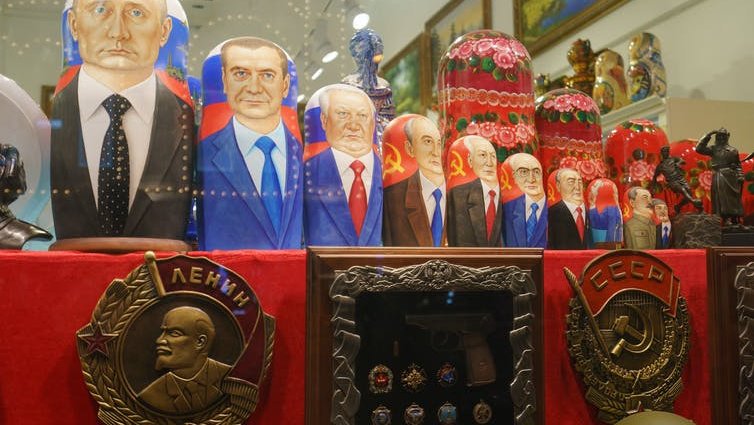 What a contrast it was. In early May 2000, Vladimir Putin strode through the Kremlin’s gilded corridors, his progress relayed on live TV across the world’s largest country, and beyond. I was reporting from Moscow for the BBC. Putin looked purposeful, slim and sober as he swore to uphold the constitution of the Russian Federation.

During the 1990s, the international press corps in Moscow had become used to the president of Russia as an unpredictable character: impulsive, sometimes even drunk in public. But Boris Yeltsin resigned suddenly on the last day of 1999. As the constitution required, his acting successor – Vladimir Putin, a prime minister who had built his reputation by taking the fight to separatists in Chechnya – had to stand for election to be confirmed in his post. He was duly elected.

Two decades later, Putin’s critics argue that he has upended that constitution – introducing changes, by means of a recent national vote, that mean he could stay in power until he is 83.

None of the correspondents in Moscow in May 2000 stopped to think that Putin might be in power so long. He probably did not foresee it himself. At the time, his arrival appeared to be a necessary corrective to the chaos that had gone before.

We correspondents had certainly seen plenty of that: for the few winners of Russia’s new bandit capitalism, there had been unimaginable wealth; for many more, uncertainty and unpaid wages. From the years of political and economic chaos that had followed the collapse of communism, another kind of leader now emerged – one who was very much a product of the Soviet system in which he had grown up.

Read more:
The wild decade: how the 1990s laid the foundations for Vladimir Putin’s Russia


Because relatively few westerners or other foreigners have visited Russia, those correspondents who have ventured there have had a disproportionate influence on forming outside opinion of the country. At various times, Russia has welcomed them, expelled them – or banned them altogether.

Theirs is the story I tell in my new book, Assignment Moscow: Reporting on Russia From Lenin to Putin. In short, Russia’s treatment of international correspondents tells the story of its relations with the rest of the world.

I first visited the Soviet Union as a language student in 1987. Four years later, I returned as a TV news producer. It was my first foreign assignment. It was also the year when the Soviet Union ceased to exist. Major change had been underway for some years. That era of reform – started in the 1980s by the last Soviet leader, Mikhail Gorbachev – was also a golden age for international correspondents.

Fred Weir – whom I interviewed for the book – first went to Moscow in 1986 as correspondent for a Communist newspaper, the Canadian Tribune. He has reported for many other English-language publications since, and still does. He remembers that “a window on the country”, opened for foreign journalists as the Gorbachev era got underway. Travel restrictions remained, but were eased. Yet while it was not clear which direction the Soviet Union would take, few foresaw such a complete and sudden collapse of the system.

The brightest correspondents who have covered Russia have always tried to understand the country, its language, history and culture. Their insight has often enabled them to guess what was coming.

Journalism is designed to capture the sense of a moment, of a day. The greater understanding and interpretation is left for historians, who often benefit from a wider range of sources, and the power of hindsight. Yet the work of the best reporters from Russia – even as far back as the revolutions of 1917 – is still worth reading today.

For weeks after Vladimir Lenin and his Bolshevik followers seized power in November 1917, conservative newspapers gleefully predicted their downfall. Arthur Ransome – better known today as an author of children’s books, including the childhood idyll Swallows and Amazons – and Morgan Philips Price of the Manchester Guardian both stand out as two who correctly predicted that the Bolshevik regime would endure.

They were curious, both spoke good Russian, and had extensive contacts in political circles. Reporters could speak to revolutionaries, workers and peasants. Diplomats did not have the same freedoms, so they were slower to appreciate that the Tsar’s dynasty was doomed.

Philips Price and Ransome were not unbiased observers. Nor was John Reed, the charismatic young author of Ten Days that Shook the World, which was about the revolution. He admitted as much when he wrote: “My sympathies in the struggle were not neutral.”

Correspondence in the Guardian’s archives shows the length to which the paper later went to distance itself from Philips Price. A pamphlet which he wrote was deemed so inspiring by the Bolsheviks that they used it as propaganda to dissuade British troops who had entered Russia to reverse the revolution. As for Ransome, he clearly admired Lenin, and later married Leon Trotsky’s secretary.

Correspondents who were so impressed by Lenin found their counterparts in later admirers of Joseph Stalin, Nikita Khrushchev and Mikhail Gorbachev. In the 1930s, the king of Moscow correspondents was Walter Duranty of the New York Times. His 1990s biographer, SJ Taylor, declared him Stalin’s apologist.

The recent film Mr Jones remembers Duranty’s refusal to report the famine in Ukraine in the 1930s. His playing down of the mass starvation kept him in favour with Stalin’s regime, and he later took credit for the US’s diplomatic recognition of the Soviet Union.

Another pioneering correspondent could not believe what seemed to be astonishing luck as she crossed into Russia at its border with Poland without the right papers and was still able to make her way to Moscow. Marguerite Harrison, hailed by the New York Times as a “brilliant news writer”, called her 1936 autobiography Born For Trouble.

One trouble in her case was that she was not just a great reporter. She was also an American spy. In her defence, Harrison’s gender had prevented her from getting the journalistic assignment, so she agreed to work for US military intelligence too. She ended up in a Moscow prison cell, but her luck held out long enough for her to get an interview with Trotsky. Her excellent access was later explained by the fact that the Soviets knew what she was up to, and wanted to keep an eye on her.

The sense of press freedom – the “window on the country” that Weir remembers – endured through the first chaotic decade of post-Soviet Russia. It no longer does. Western correspondents “are seen more as hostile actors”, Matthew Chance, who has reported from Russia for CNN since the late 1990s, told me. In an age when Russia’s relations with the west – especially the UK – are worse than at any time since the cold war, correspondents face great challenges. Access “is negligible”, Chance argues.

Journalism itself is in crisis: criticised not only by leaders in countries where the media has rarely been free, but also ignored and chastised by governments in the west. Russia’s media policy in recent years shows a shift towards wanting to tell its own story, through RT and its other international media platforms, rather than engaging with western media. Still, recent verbal assaults and veiled threats to the Financial Times and New York Times over their reporting of coronavirus statistics shows that international coverage can still sting.

The brightest correspondents who have covered Russia have always tried to understand the country, its language, history and culture. Their insight has sometimes – as in the case of Ransome and Philips Price – enabled them to guess what was coming.

My generation of correspondents may have witnessed, and understood, the factors that delivered Putin’s initial popularity: his tough line on fighting separatists in Chechnya and his determination to bring Russia’s new tycoons – the oligarchs – under the Kremlin’s control.

I see now that I did not realise fully what I was witnessing that day in May 2000. Looking back two decades later, it feels like the start of yet another revolutionary period in Russia’s history. What seemed then like a peaceful transition of power was the beginning of a new system – the Putin system – that endures to this day, and may last yet longer: giving Moscow correspondents plenty more to write about.

James Rodgers received funding from the Society of Authors to research his book 'Assignment Moscow: Reporting on Russia from Lenin to Putin'.