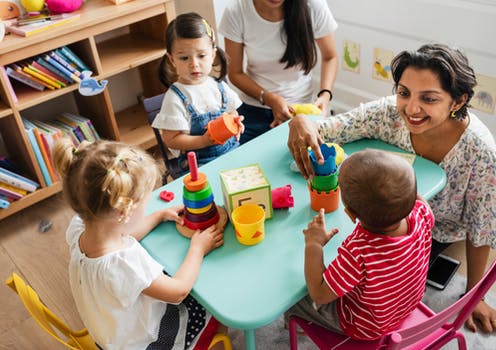 State-funded nursery schools occupy a unique position in education. Serving children from two to four years old, they are disproportionately located in areas of deprivation – in 2015, 64% were in the 30% most deprived areas in England. They also support higher-than-average proportions of children with additional needs.

Our research, conducted with four nursery schools, shows that the part they play in their local communities has expanded over the past decade. They now fill significant gaps in welfare provision in England.

Before the coronavirus pandemic, they provided support to children and families which ranged far beyond their educational role. Now, they are likely to be more vital than ever.

In recent years, there has been an increased focus on measuring the effectiveness of the youngest children at schools in England – from when they start in reception in the September after their fourth birthday. This has raised the stakes for all schools, who are required to meet national attainment standards.

Without high-quality early education, children who struggle stand little chance of meeting these attainment standards and catching up with their more advantaged peers. This is the vital service provided by nursery schools.

The purpose of nursery schools is to deliver high-quality early education to children before they enter primary school. The aim is develop their numeracy, literacy and social skills in particular. They are led by a head teacher and employ other qualified teachers. In July 2019 there were 36,500 state nursery school places available in England.

Our research found that nursery schools are indeed a critical provider of quality early years experiences for the most vulnerable children and those with special educational needs and disability. They make an important contribution in readying all children for school. One teacher in our study commented:

If there aren’t state-funded nursery schools, those children will not go anywhere. If they haven’t got the home life to support them, then that’s it, they’re always behind.

Our work also confirmed that nursery schools now provide substantial assistance to children and families beyond their role in education. This can range from providing clothing to support with completing social benefit forms. One manager told us:

It’s more than supporting a child, it’s supporting the whole family and hopefully the community around the school too.

In the past, the most disadvantaged families were supported by SureStart centres, which provided healthcare and parenting advice, early education and other family services. However, as many as 1,000 of these centres may have closed since 2010.

Nursery schools have absorbed these additional areas of need, and staff have seen their role evolve and workloads increase. One nursery school teacher commented:

For children it’s not just about literacy and numeracy, it’s much more. There are lots of things that they often need support with, their physical development, their toileting, their feeding, their sleeping.

The expansion in the role played by nursery schools is directly linked to the austerity policies of the past decade. The reduction in funding for all areas of the welfare state has led to significant contractions in support available, especially in relation to the availability of housing and benefits for families out of work or struggling to make ends meet.

The consequences of these changes are keenly felt by nursery school staff. They reported that their role has become increasingly complex, as they cater to more children with special educational needs and disabilities as well as recent migrants and children who speak English as an additional language. All four nursery schools in our study had seen a marked increase in demand for places for children in these groups.

Concerns among staff over whether these demands are sustainable led to tensions in the schools we visited. One of the nursery managers commented that in some instances, they have to provide children with one-to-one support:

There is no funding for that at the moment. But we have to do it for that child, so we do, which obviously can put a strain on the rest of the nursery.

These efforts resulted in over-stretched resources, to the detriment of the staff and children. Furthermore, even these efforts are under threat, given the current long-term funding uncertainty facing nursery schools in England.

Our study confirms the vital role nursery schools play in local communities, and especially in supporting children from poorer or disadvantaged families. The aftermath of the coronavirus pandemic will only increase this, as unemployment is disproportionately affecting vulnerable and minority ethnic families. Nursery schools have never been more important to level the playing field.

Alice Bradbury receives funding from Economic and Social Research Council and the British Academy, and previously from the National Education Union and the More than a Score campaign group. She is affiliated with More than a Score.

Lewis Fogarty does not work for, consult, own shares in or receive funding from any company or organisation that would benefit from this article, and has disclosed no relevant affiliations beyond their academic appointment.

2020-07-22
Previous Post: Coronavirus: new social rules are leading to new types of stigma
Next Post: Discovering how genetic ‘dark matter’ plays a role in mental illness is just the tip of the iceberg for human health