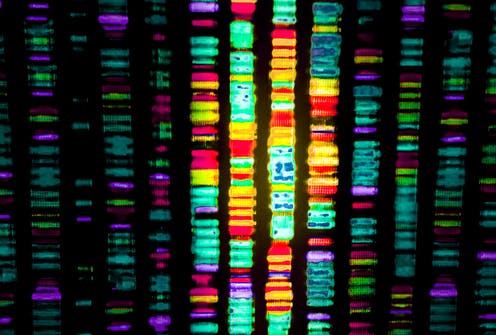 Each cell in our bodies holds two metres of DNA that contains the six billion bits of the DNA code necessary for making a healthy human body. This is known as the human genome. It is now accepted that what makes people different, and contributes to their susceptibility to ill health, are the 6-10 million DNA differences in the human genome known to exist within the general population.

A surprising fact is that only 1.7% of these 6 billion bits of code represent the genes that make proteins. Proteins are the physical building blocks of our bodies and are essential to keep us healthy.

Though huge strides have been made in mapping the DNA differences associated with mental health conditions such as depression, schizophrenia and chronic anxiety thanks to the sequencing of the human genome, what surprised many was the discovery that over 98% of these DNA changes lay within the dark and mysterious remainder of the human genome that did not make protein.

This part of the genome had been largely dismissed as the “junk” genome but, because of its importance to health, is now known as “the non-coding genome”. Critically, we don’t yet fully understand what type of information is contained in the non-coding genome that is so essential for human health and how DNA differences change this information result in ill-health.

To understand how the non-coding genome supports health it may be helpful to think of the human body as a vast and extremely complex community of different cells. Which means the identity of a cell, and its ability to communicate effectively with other cells, is essential for normal human development and health.

Based on this assumption, many scientists have suggested that although genes contain the information to make cells, the information required to allow these cells to communicate and organise into tissues resides in the non-coding genome. Incredibly, recent estimates suggest that the human non-coding genome contains over five times more information critical to health than that which is contained within genes.

We now know that much of the information in the non-coding genome is in the form of “gene switch” sequences that control the levels that genes are turned on in specific cells and in response to specific signals. It is highly likely that these switches, by responding to signals travelling between cells, are responsible for coordinating the cell-to-cell interactions required to form the structure and function of organs such as the brain.

However, identifying these switches and their function in specific cells has been challenging. Being able to easily identify and understand these gene switches, and the effects of ill-health-inducing DNA differences on their activity, will be critical to fully understanding the genetic basis of mental health.

Working in collaboration with Andrew McIntosh at the University of Edinburgh, our research looked to determine what controlled the very specific expression of neuropeptides (chemical signals) in parts of the brain where they are essential to controlling normal mood and alcohol intake.

We noticed that the specific cell types in which many of these genes were switched on were shared by many different species. For example, the gene that produces the alcohol intake and mood-controlling galanin peptide was turned on in very specific regions of the hypothalamus and amygdala – parts of the brain that control appetite and mood in mice, rats and humans.

We reasoned that the sequences of the gene switches that controlled this expression would also be very similar between these species. So we used powerful computers that lined up the DNA sequences of more than 100 vertebrate species and found that a non-protein-coding DNA sequence, next to the galanin gene, had changed very little through evolution, suggesting its importance for survival.

Using CRISPR genome editing, a process that allows us to make targeted deletions in the DNA of mice, we deleted this sequence from the mouse genome and found that the galanin gene was switched off in these mice. Surprisingly, we also found that mice lacking this switch drank less ethanol and that male mice had reduced fear. The most important observation was that the switch contained DNA differences in the human population that altered its activity.

Our research showed that one of the differences could be linked to alcohol abuse and anxiety in men in the UK Biobank human genetic cohort which mirrored our observations in mice. This study was recently published in the academic journal Molecular Psychiatry.

We believe that our ability to quickly and accurately identify the functional components of the non-coding human genome, and how they can go wrong to contribute to susceptibility to mental health conditions, is just the tip of the iceberg in terms of human health. Which means the same principles used in our studies can be applied for other diseases such as cancer, cardiovascular disease, Type 2 diabetes and susceptibility to Covid-19.

There is even evidence that the activity of these gene switches can be affected by life events such as childhood deprivation known to affect disease susceptibility through an epigenetic process known as DNA-methylation – epigenetics being the study of biological mechanisms that switch genes on and off.

There has never been a more exciting time to be in genetics and it is hoped that the exploration of the “dark matter” of the non-coding genome will bring tremendous benefits in terms of being able to diagnose susceptibilities to mental health disorders and other conditions and help us develop new, more personalised treatments.

2020-07-22
Previous Post: Why nursery schools are a secret weapon in the fight against inequality
Next Post: After the Russia report: how to protect British democracy from interference