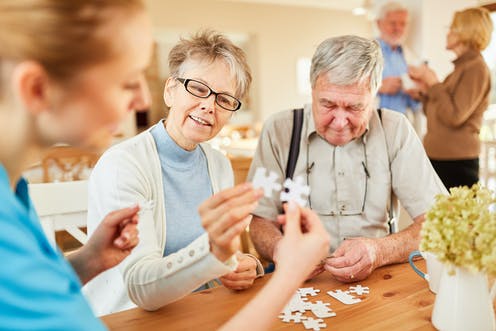 Every three seconds, someone in the world develops dementia. The most common form of dementia is Alzheimer’s disease. While researchers have identified a number of risk factors that are linked to dementia – including genetics, smoking, and high blood pressure – there is currently still no cure.

Part of the reason for this is because of how complicated it is to test potential Alzheimer’s drugs. In order to conduct clinical trials participants need to have symptoms. But by the time symptoms appear, it’s usually too late for treatments to have a large effect as many of their brain cells have already died.

But our latest research developed a new human cell model that is able to rapidly simulate the development of Alzheimer’s disease in the lab. This allowed us to identify a gene, called BACE2, that is naturally able to suppress the signs of Alzheimer’s disease in human brain cells. Our research is the result of around five years’ work, and was the collaborative effort of teams based in London, Singapore, Sweden and Croatia.

Researchers already know a lot about which genes cause Alzheimer’s disease or make someone more likely to develop it. These genes contribute to certain toxic proteins accumulating in the human brain. So our team thought that the opposite must also be true: our brain cells must also have proteins that can naturally slow down the development of Alzheimer’s.

One gene that can definitely cause Alzheimer’s disease is a gene found on the 21st pair of human chromosomes that is responsible for making the amyloid precursor protein (APP). Research shows that 100% of people born with just one extra copy of the APP gene (called “DupAPP”) will develop dementia by age 60.

The simple answer for this is because they have an extra dose of all other genes located in chromosome 21. We believed that there could be some dose-sensitive genes on chromosome 21 that, when triplicated, protect against Alzheimer’s disease by counteracting the effects of the third APP gene.

These genes must then appear to delay the onset of clinical dementia in some people with Down’s syndrome by approximately 20 years. Studies have even shown that any future drug able to delay dementia onset by just five years would reduce the prevalence of Alzheimer’s in the general population by half.

To study the potential of the extra genes, we took hair follicle cells from people with Down’s syndrome and re-programmed the cells to become like stem cells. This allowed us to turn them into brain cells in a Petri dish.

We then grew them into 3D balls of cells that imitated the tissue of the grey matter (cortex) of the human brain. The 3D nature of the culturing allowed misfolded and toxic proteins to accumulate, which are crucial changes that lead to Alzheimer’s disease in the brain.

We found all three major signs of Alzheimer’s disease (plaque build-up in the brain, misfolded “tau” proteins and dying brain neurons) in cell cultures from 71% of people with Down’s syndrome who donated samples. This proportion was similar to the percentage of clinical dementia among adults with Down’s syndrome.

We were also able to use CRISPR – a technology that allows researchers to alter DNA sequences and modify a gene’s function – to reduce the number of BACE2 genes from three copies to two copies on chromosome 21. This was only done in cases where there were no indications of Alzheimer’s disease in our cellular model. Surprisingly, reducing the number of BACE2 genes on chromosome 21 provoked signs of the disease. This strongly suggest that having extra copies of a normal BACE2 gene could prevent Alzheimer’s.

The protective action of BACE2 reduces the levels of toxic amyloid proteins. This was verified in our cellular models, as well as in cerebrospinal fluid and post-mortem brain tissue from people with Down’s syndrome.

Our study provides proof that natural Alzheimer’s-preventing genes exist, and now we have a system to detect new potential protective genes. Importantly, recent research showed the protective action of BACE2 might also be relevant to people who don’t have Down’s syndrome.

This would allow us to detect the disease before it starts developing in a person’s brain, and could make it possible to design personalised preventative treatments. However, we are still a long way from reaching this goal.

Most importantly, our work shows that all three signs of Alzheimer’s disease detected using our model could be prevented by drugs known to inhibit the production of the toxic amyloid protein – and this can be detected in as little as six weeks in the lab. We hope our discovery could lead to the development of new drugs aimed at delaying or preventing Alzheimer’s disease, before it causes brain cell death.