Volunteering, mutual aid and lockdown has shifted our sense of ‘happiness’ 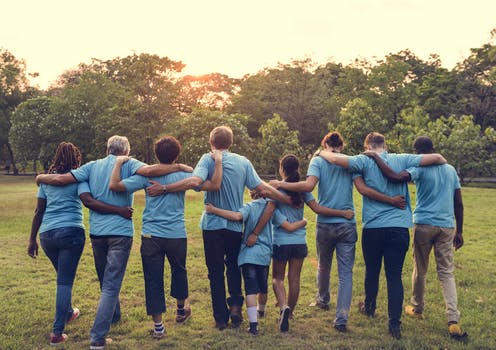 As lockdowns around the world ease or end, it’s clear that the coronavirus crisis has brought racial, gender and socio-economic inequalities into sharp focus. The Black Lives Matter protests suggest that a return to “business as usual” will be met with strong opposition. A YouGov poll for the RSA (Royal Society of Arts) conducted in April at the height of the lockdown found just 9% of UK citizens wanted life to go back to the way it was before.

People’s mental health has rightly been a concern throughout lockdown. But with widespread reports of a decline in our sense of collective wellbeing, perhaps it is our sense of “happiness” as experienced during a pandemic that is changing.

How we understand happiness – often thought of as “subjective wellbeing” in contemporary psychology and economics – has changed over time and varies between cultures. For example, before the Enlightenment, happiness under the Christian pastoral tradition was something to be experienced in the next life, to be ensured through prayer and subordinating oneself to God.

Two more recent versions of happiness put forward by American sociologist Sam Binkley are linked to systems of governance. He argues that after the second world war, the prevalent social or “welfarist” understanding of happiness posed that our mutual interdependence on each other and strong bonds within society led to wellbeing. This was tied to Keynesian economics and the roll-out of social citizenship rights in many western democracies at this time, which sought to re-balance the inequities of capitalism through re-distributive taxation, rights to housing, healthcare and a safety net for the unemployed.

However, welfare provision has been steadily eroded since the late 1970s by neoliberal governments on both sides of the Atlantic. A new individualist version of happiness has emerged, seen as something that can be augmented through adjusting attitudes and behaviours and strategically cultivating relationships. The recent interest in promoting and measuring citizens’ happiness in many Western countries marks an important shift from policies that advance structural means to ensure collective wellbeing, to policies that focus on the personal.

This political interest in happiness has been underpinned by the new academic discipline of positive psychology that emerged in the late 1990s, which puts forward a concept of happiness as something that can be expertly calculated, scientifically measured and improved. Recent research supports the idea that people now understand happiness as an inward-looking undertaking. When asked to think about their subjective wellbeing, participants focused on information about their feelings, jobs and relationships, while thoughts about contributing to the world were rare.

The idea that you can make yourself happier through conscious effort is undoubtedly appealing, but there is growing criticism of positive psychology. Considering happiness to be dependent on a person’s attitudes and interpretation of their circumstances, rather than the circumstances themselves, transforms major social problems such as injustice, marginalisation, debt, low-wage exploitation and rising cost of living into merely matters of personal self-care.
This potential for victim-blaming is noted by essayist and activist Barbara Ehrenreich who writes about the widespread use of positive psychology rhetoric in the “positivity training” offered to employees being made redundant in US organisations.

These two different versions of happiness have profound implications for how we understand ourselves, our relationship to society and each other. The “welfarist” approach sees humans as interdependent and fundamentally bound up with each other’s wellbeing. The individualistic incarnation conceives of the self as an independent work-in-progress that can be bettered through productivity.

Through interviews for my research I found that while people drew on both versions of happiness to talk about themselves and their lives, the individualistic idea of happiness as a personal project was common. Many participants spoke of “working on their happiness”, through adjusting attitudes, making “good” choices and practising mindfulness to position themselves as successful, responsible citizens.

Since the global lockdown, however, “responsible” citizenship seems to have become more associated with building community and looking out for each other. Government statistics released in June show that 73% of UK residents were confident that they could turn to others in their community for help during the pandemic, and 81% felt that people were doing more to help others than before the outbreak.

The separation from friends and family, from our workplaces and from public life may have sparked a shift towards a more social, outward-facing view of wellbeing. Many people have felt the insecurity of losing jobs or income, perhaps for the first time. Alongside our reliance on key workers, our interdependence has become hard to ignore.

The Black Lives Matter protests may also speak to a more outward-facing understanding of wellbeing. As philosopher Hannah Arendt argued, it isn’t possible to be happy or free “without participating, and having a share in, public power”. In trying to understand the paradox between our focus on happiness and personal wellbeing and the simultaneous rise in depression and anxiety, the socialist feminist writer and academic Lynne Segal in her book Radical Happiness argues instead for seeking fulfilment in other people, and proposes communal activism as a powerful antidote to the individualised techniques of happiness that cut people off from their social worlds.

So as the world returns to shopping, travelling and consuming, we return also to growing food insecurity, unemployment and debt. In the face of this, it is perhaps more important now than ever that the mutual aid groups, renewed sense of community and activism, and more outward-looking version of wellbeing continues and thrives.

Emma Anderson does not work for, consult, own shares in or receive funding from any company or organisation that would benefit from this article, and has disclosed no relevant affiliations beyond their academic appointment.

2020-07-06
Previous Post: How COVID-19 led to the closure of popular bookshops in Bangladesh · Global Voices
Next Post: How countries get away with hoarding drugs in a pandemic