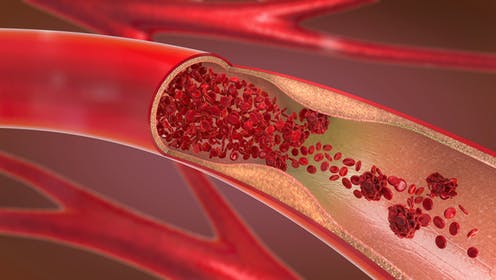 People who suffer from a combination of type 2 diabetes, high blood pressure, high cholesterol, and obesity have a condition known as “metabolic syndrome”. This condition causes the blood vessels to stiffen. When the arteries are stiff or become blocked, there’s a reduced flow of oxygenated blood that’s able to reach the body’s tissues and vital organs. This puts a person at increased risk of heart attack or stroke. But in order to prevent further harm to patients with metabolic syndrome, it’s key to understand what causes damage to the blood vessels – and how this can be treated.

Our latest research has identified a previously unknown mechanism by which metabolic syndrome is able to cause blood vessel damage. But, we also found a way to reverse this damage. Our study looked at both mice and human tissue samples. In both groups, we found that if a subject was obese and had type 2 diabetes, their blood vessels overproduced an enzyme called BACE1. This triggers a biochemical reaction that creates a protein called beta amyloid. Levels of BACE1 are increased by excessive blood lipids (fats) and glucose (sugar), which are characteristic of the metabolic syndrome.

In humans, raised levels of beta amyloid are associated with damage to the surface lining (endothelium) of blood vessels. Damage to the endothelium disrupts the normal functioning of the blood vessels, leading to high blood pressure and atherosclerosis – the build up of plaque along the walls of the blood vessels. This build up of plaque can harden over time, narrowing the arteries and making it harder for oxygenated blood to move through the arteries. This can lead to severe complications, including heart attack, stroke or death.

This work builds on our previous findings that showed raised levels of the BACE1 enzyme is linked with obesity and type 2 diabetes. But perhaps the most promising finding from our latest study was that this process could be targeted by drugs.

The pharmaceutical industry and researchers have been interested in BACE1 for a number of years because of the role it plays in the development of another major illness. As BACE1 generates beta amyloid, these aggregate together and form amyloid plaques in the brain, which are characteristic of Alzheimer’s disease.

Drug companies have developed a number of candidate drugs to inhibit the activity of BACE1. But those trials have so far failed to produce any evidence that these interventions would halt or slow the onset of Alzheimer’s disease.

Intriguingly, our study suggests these drugs could potentially be repurposed in order to target the over-activity of BACE1 – and beta amyloid production – in the blood vessels of people with obesity and type 2 diabetes.

Current treatments for vascular complications are aimed at improving the underlying components of the metabolic syndrome. Statins, insulin sensitisers, and anti-obesity drugs all have beneficial effects, but unfortunately they don’t work for everyone and adherence of these drugs are low. Currently this leaves invasive surgery as the only option remaining.

During our study, we treated mice that were obese and had type 2 diabetes with an experimental compound, named M-3. This compound is a potent small molecule inhibitor that was able to stop BACE1 from producing beta amyloid. While this compound is not suitable for use as a drug in humans, its method of action to stop BACE1 activity is the same as more clinical relevant drugs.

The effects of reducing beta amyloid were dramatic. Not only did it prevent further damage to the blood vessels, but the reduction of beta amyloid reversed the damage that had already been caused.

Though the existing drugs will need to be trialled in humans for this type of treatment, our functional studies in mice and human samples suggest that these findings will also be seen in patients. Being able to repurpose an already existing therapy will allow for an easy, cost-effective way to give people living with diabetes a therapy that will enable them to live longer, healthier lives.

This research was performed at the University's of Dundee and Leeds and funded by grants from the British Heart Foundation, Diabetes UK, the Medical Research Council, the Diabetes Research and Wellness Foundation, and the Innovative Medicines Initiative (SUMMIT).

2020-07-04
Previous Post: People with delusions understand metaphor differently – here’s how it could help explain schizophrenia
Next Post: How Shanghai’s LGBTQ community came out for Pride Month in 2020