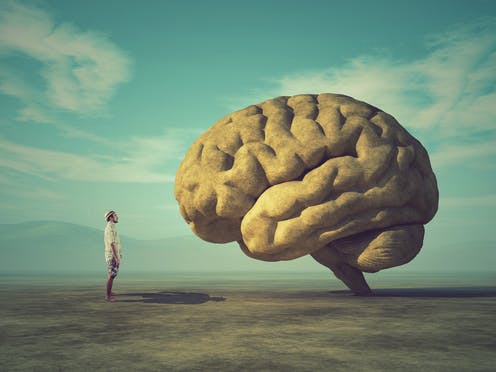 Figurative language, by which the speaker intends to communicate something other than what is actually said by the words used, is commonplace in human communication. Some claim that metaphorical expressions such as “My home has become a prison” or “My daughter is a monster” are used on average six times during every minute of conversation.

People with a diagnosis of schizophrenia will have been, just like anyone else, exposed to non-literal language from childhood. But research suggests that they have difficulty accurately interpreting it. Findings also show that they have trouble generally making sense of language in context – that is, inferring someone’s intended meaning in a particular situation.

But it isn’t clear whether these difficulties with metaphor stem from other cognitive impairments that we associate with schizophrenia, including problems with Theory of Mind (the ability to attribute beliefs, desires and emotions to oneself and to others), working memory, or language more generally. Furthermore, the tasks used to measure metaphor understanding in these studies typically require subjects to explain what they take to be the meaning of the metaphor, which measures expressive skills, rather than just comprehension.

So what are we doing when we take something non-literally? Context is certainly crucial. “She is a pig” can mean at least two different things: an actual farmyard animal, or a friend with poor table manners. That is a very straightforward example, but hearers arrive at a specific non-literal interpretation based on numerous variables.

Read more:
People with depression use language differently – here’s how to spot it

Some have suggested their findings provide evidence of a need to actively suppress metaphor irrelevant features when you’re in the process of interpreting a metaphor. So it’s notable that impaired inhibitory control (the ability to inhibit or suppress salient information) has been shown in Alzheimer’s disease, Parkinson’s disease and schizophrenia – all conditions associated with metaphor comprehension deficits.

Indeed, some findings suggest that it is the impaired inhibitory control that is specifically associated with poorer metaphor comprehension in schizophrenia.

With Ellen Palmer, Quoc Vuong, Nicol Ferrier, Andreas Finkelmeyer, Wolfram Hinzen and Stuart Watson, I researched metaphor comprehension in people with a diagnosis of schizophrenia. But this time we used a novel picture selection task to measure their understanding, so that any difficulties with expression could be ruled out as a causal factor.

We also tested participants’ performance on two other tasks that measured their ability to understand other people’s beliefs, desires and emotional states, and their ability to inhibit an action in order to carry out a task accurately. This enabled us to determine whether performance on the metaphor comprehension task was associated with other, more general cognitive capacities.

We showed that even when IQ, number of years of education, and ability to understand others’ beliefs and emotions were considered, participants were significantly more likely to interpret metaphorical expressions literally.

Performance on the inhibitory control task suggested that deficits in this area are likely to be one of multiple factors contributing to the poorer performance of our schizophrenia group on the metaphor trials of the picture selection task.

Given that people with a diagnosis of schizophrenia have this propensity to take things literally, might this help us better understand psychosis? And how might the unusual experiences that are characteristic of psychosis (hallucinations and altered mood, for example) elicit, or even require, figurative thinking?

It has been argued that we can only reason about emotion through metaphorical “thinking”. Delusional subjects are likely to encounter an increased number of strong and unfamiliar emotions and experiences, which they also make sense of through metaphorical thinking. But perhaps over time this non-literal thinking might come to be understood literally by those with delusions (due in part to these deficits in metaphor comprehension).


What might have started as a best attempt to reason about an ever-more complex set of emotions, feelings and experiences in a loose, less-than-literal way (for example: “It’s as though I’m being watched in my own home”), might come, over time, to be understood increasingly literally. This might be “fuelled” by several factors.

First, metaphorical thinking might “colour” the way the world is perceived. There is some evidence to suggest that, even if metaphorical thinking remains appreciated as non-literal, the figurative meaning can remain tinged by the literal meaning. For example, when an utterance such as: “That was just terrific” is intended as an ironic criticism, it remains coloured by the positive, literal meaning. There is no reason to think that such an effect would be confined to irony – it may also extend to other non-literal modes of expression, such as metaphor.

It seems plausible, then, that the thought “I am Jesus” (the kind of thing someone experiencing psychosis might say) – even when interpreted non-literally as an expression of moral self-worth – would remain tinged with the literal meaning. This seems even more likely among those who struggle to separate literal from non-literal meaning.

Finally, if one lives an isolated lifestyle – which is common among individuals experiencing the onset of psychosis – a lack of interpersonal communication can often lead to an increase in intrapersonal communication, that is communication within one’s own mind. These thoughts could then become more and more “figurative” as the psychotic episode worsens and the individual becomes more isolated from those who might correct them.