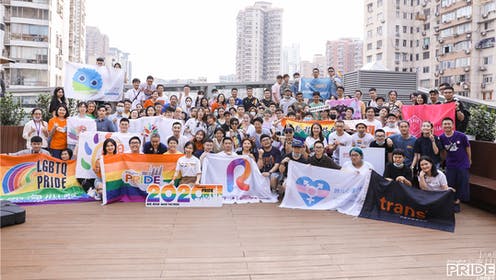 Pride Month events scheduled for June 2020 were cancelled in most parts of the world due to the ongoing COVID-19 pandemic. But, bucking the trend – and perhaps giving a message about China’s handling of the crisis – Shanghai’s LGBTQ community has just celebrated Pride with a series of public events.

The longest-running pride festival in mainland China, ShanghaiPRIDE has been held in June each year since 2009. Although COVID-19 lockdown was eased in Shanghai a couple of months ago, people still have to wear face masks when attending public events and many prefer avoiding public gatherings altogether.

So, according to ShanghaiPRIIDE co-founder Raymond Phang, organisers had to take special measures to protect participants’ health and safety, such as scaling down the size of events, checking participants’ health apps installed on their mobile phones, providing face masks and sanitisers for participants. People’s temperatures were checked on entry into event venues, which were all either outdoors or well-ventilated.

Running between June 13 and 21, the nine-day festival consisted of a job fair, an open day for LGBTQ groups, three panel discussions (on mental health, inclusive academia and rainbow marriage respectively), a Pride run and a “Rainbow Brunch”. There was also a half-day of film screenings as part of the ShanghaiPRIDE Film Festival, two parties, and a “Pride Talk” meet-up and discussion event. These events all took place physically in Shanghai’s public urban spaces.

Although there was no actual Pride parade in the western sense, many events in Shanghai still brought queer people together. ShanghaiPRIDE organised a “Rainbow Bike Ride” to mark the IDAHOBIT (International Day Against Homophobia, Transphobia and Biphobia) on May 17 as a prelude to the festival. Six teams of cyclists wearing different rainbow coloured shirts rode along different routes around the city before they arrived at the same destination, uniting different colours of the rainbow.

The Pride run on June 14 encouraged people to jog together, wearing or carrying rainbow signs. Participants chose to follow six or 12 kilometre routes and met at a final destination in the city centre where there was a celebration.

In China, there are no Pride parades. Perhaps we don’t really need it. That’s why we have different cultural events such as film festivals, theatres and so on. Sport events such as the bike ride and the run are the closest to what we can get to having a Pride [march]. You know, obstacles are there not to help you stumble – obstacles are there to help you overcome them.

This year’s ShanghaiPRIDE English slogan is “Raise the Pride”. Its Chinese slogan, “敢晒，敢骄傲,” literally translates as: “Be brave enough to show yourself and be proud of yourself.”

Other groups in Shanghai have also been putting on public events and community activities for Pride month. CINEMQ, a Shanghai-based independent queer film collective formed in 2015, has recently started to collaborate with Shanghai Community Radio to run an online talk show called Queer Screen Chitchat.

The city has a third LGBTQ film festival – the Shanghai Queer Film Festival. This is a volunteer-run, independent festival held annually since 2016. The festival – which this year is expected to take place in September, depending on the status of the pandemic – works closely with filmmakers from China and the rest of Asia to support queer film culture. It also champions a more inclusive queer politics by showcasing diversity and differences within communities.

With its annual Pride celebration and three queer film festivals, Shanghai is one of the most queer-friendly cities in China. But Beijing, Chengdu and Guangzhou also host their own versions of queer film cultures and Pride events. This demonstrates how far China has come along the road to LGBTQ acceptance.

Homosexuality was decriminalised in mainland China in 1997 and was removed from the country’s classification of mental disorders (CCMD-3) in 2001. But LGBTQ people still face challenges from a heteronormative society, with an emphasis on Confucian family values and social conformity. All these make it hard for LGBTQ people to come out.

The 19-year-old queer activist Xiang Xiaohan, who organised a small-scale pride march in Changsha on IDAHOBIT in 2013, was arrested by the police and detained for 12 days. And in 2019, IDAHOBIT celebrations were banned on several university campuses and in a few cities across the country

Despite all the difficulties, civil society groups fighting for LGBTQ rights have achieved some limited success. In 2017, China’s legislative body, the National People’s Congress, amended Chinese law to allow “legal guardianship”. This enables same-sex partners to make important decisions for each other regarding medical and personal care, death and funeral arrangements and property rights.

In December 2019, a National People’s Congress spokesperson acknowledged that the legalisation of same-sex marriage was among the most popular requests for revisions to China’s civil code. But the Chinese Congress passed the new civil code in May 2020, rejecting same-sex marriage rights. So, despite some advances, there’s a long way to go before the LGBTQ communities are fully embraced in mainland China.

Hongwei Bao does not work for, consult, own shares in or receive funding from any company or organisation that would benefit from this article, and has disclosed no relevant affiliations beyond their academic appointment.