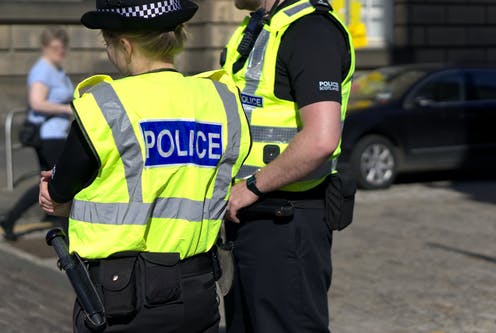 The recent wave of Black Lives Matter protests has demanded that societies pay closer attention to the way racism shapes lives. While standing in solidarity with Black people in the US, protesters in the UK have been clear that much greater attention needs to be paid to racism in the UK.

The protests have sparked critical conversations about policing and the way policing affects Britain’s Black communities. This includes the presence of police in UK schools.

My research, published this week by the Runnymede Trust, explores the effect that having police in schools has on Black and minority ethnic young people. It further calls for the removal of police from schools.

While there is a much longer history of partnerships between police and schools, the direct placement of police in schools came only in 2002 – purportedly in an effort to create safer schools. Despite changes in government, policy and motivation, partnerships between schools and police remain a significant part of the schooling landscape.

Serious questions are now being asked of the role of the police in our society. As we start to consider how we can roll back the power of the police, it’s important that we ask, as many in the US are asking, what place police officers have in our schools.

I spoke to secondary school teachers who raised a number of concerns about the presence of police in schools.

The teachers I spoke to explained how they aim to foster an inclusive, welcoming and supportive environment where all students feel comfortable learning. The problem is, teachers told me, that the presence of police officers risks disrupting this approach. While they felt this was an issue for all students, it was thought to be particularly acute for Black and Asian students – who are already subject to over-policing outside of school settings.

As many of the teachers pointed out, the presence of police in schools creates a culture of low expectations. As one teacher said, “I don’t think the police have any place in school … it suggests the worst in students.”

Low expectations in schools can have an effect not only on the wellbeing of students but on attainment levels too. Along race and class lines, these effects are likely to be felt unevenly.

The accounts of young people show what a detrimental effect the presence of police in schools can have. Kids of Colour, a community organisation working to challenge racism, shares the stories of young people of colour such as Ade and Grace. As they explain, school-based police officers can make young people, and particularly young Black people, feel intimidated, cornered and alienated.

In addition to the inequalities within schools, school-based police officers also exacerbate differences between schools. As one teacher explained, the officers will probably be placed specifically in schools in areas with high levels of deprivation, and – given the way race and class intertwine – in areas with high Black and Asian populations.

Evidence from the US shows that the mere presence of police in schools risks turning minor disciplinary issues into criminal issues. Given that Black students are already disproportionately subject to school disciplinary procedures and exclusions, the effect of this criminalisation will have racist outcomes.

The government has also vowed to increase prison places. We should pay attention to the dangers of a school-to-prison pipeline that funnels students directly from school to our ever-expanding and increasingly privatised prisons.

Some teachers felt that police could play a role in schools if their role was more community-focused, including teaching, counselling and mentoring. But research has shown that this softer approach to policing often just results in the further encroachment of the police into people’s lives. As one teacher pointed out, it would surely be better to invest in qualified teachers, youth workers and counsellors.

While the plans seem to be being rolled out without due public consultation, the government would do well to listen to the concerns of teachers and to the voices of young people. If Boris Johnson’s plans for a commission to look at inequality are anything more than a performance, the removal of police from schools should be high on the agenda.

Remi Joseph-Salisbury received funding from the British Academy for the research upon which this article is based.

2020-07-03
Previous Post: The psychology of being a better ally in the office – and beyond
Next Post: Combating climate change – why investors should keep their shares in fossil fuel companies