Marcus Rashford: a brief history of free school meals in the UK 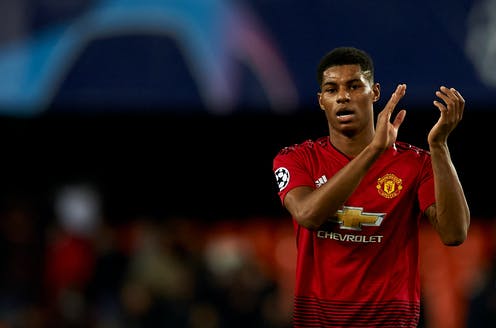 Following a campaign led by the England and Manchester United footballer Marcus Rashford, the UK government has committed to providing free school meals to children in England during the 2020 summer holidays.

The coronavirus pandemic has had a devastating impact on household food security. A poll by the charity the Food Foundation has found that 200,000 children are now missing meals.

This situation had been likely to worsen during the school holidays. Holiday hunger – when children lack adequate nutrition without the free meals provided at school – is a pressing issue.

The decision by the government to continue to provide free school meals over the summer holidays is extremely welcome. However, the U-turn on the issue reflects the convoluted history of the provision of free meals for children in the UK.

School meals have a long history in the UK. When compulsory education was introduced in the 1870s, thousands of poor children went to school hungry. The city of Manchester started giving some children meals in 1879 and the 1906 Education Act allowed authorities to provide meals, but very few did.

In 1921, criteria were set regarding which children were able to have school meals. Again, though, the act was not implemented by local authorities. A survey carried out in 1936 found that in 26 Local Education Authorities where unemployment was above 25%, less than 15,000 children – out of a school-age population of half a million – were receiving free meals at school.

It was not until 1944 that laws were passed which required all local authorities to provide free nutritious meals for school children. In 1946, free milk for all children was introduced. These provisions ensured essential nutrition for thousands of children.

In 1980, Margaret Thatcher’s Conservative government ended the provision of universal free milk (as education secretary, Thatcher had stopped free milk for the over sevens in 1971). A new Education Act was introduced which halted the minimum nutrition requirement for school meals. Local education authorities only had to ensure the provision of food for children of families receiving supplementary benefits and family income support.

Thatcher encouraged the privatisation of the school meals services. The Competitive Tendering Act allowed private companies to bid to provide school meals. These changes, without adequate measures to ensure minimum standards of nutrition, resulted in meals that were cheap rather than nutritious.

The 1986 Social Security Act cut the numbers of children who were eligible for free school meals at a time when unemployment and inflation were rising. Aggressive advertising of unhealthy foods by celebrities encouraged children to eat increasingly unhealthy processed foods. This food was sold cheaply by supermarkets, making it harder for parents to budget for more expensive fruit and vegetables for their families.

This changing food pattern – towards fatty, sugary, and highly processed foods – has become known as the “nutrition transition”. The growing trend towards unhealthy food, including in schools, resulted in the children of the 1990s being assessed as poorly nourished when compared to the children of the 1950s.

Inadequate investment in the health and nutrition of children continues to have negative impacts on health and achievement at school, especially for children from low-income families.

It was not until April 2001 that school meals were again called to adhere to nutritional standards. But aggressive marketing of unhealthy low-cost food has also resulted in increasing childhood obesity levels, despite rising levels of hunger in the poorest families.

The UK established the Food Standards Agency in 2000 to promote healthy eating practices, with many local governments developing healthy eating policies. This was bolstered by new regulations on healthy food in schools, in part as a response to a campaign by celebrity chef Jamie Oliver.

But fewer children were entitled to free school meals, while unhealthy food had become cheaper and more easily available. Ten years of austerity and cuts to local government budgets have resulted in increased levels of inequality and growing childhood poverty. The coronavirus pandemic will only deepen these challenges.

There is evidence that children who are living in food-insecure families are more likely to suffer from education losses. Although research has shown the importance of eating between five and ten portions of fruit and vegetables each day, more than a quarter of UK children eat less than one portion a day.

Some researchers believe that we should invest in “gold standards” for nutritious school meals. Other campaigns suggest that all primary school children should have free school meals.

Rashford’s campaign has ensured that many children will not go hungry this summer. It has also highlighted the long history – and ongoing problem – of food poverty in the UK.

Regina Keith is affiliated with WPHNA. I am part of the executive committee of the World Public Health Nutrition Association.