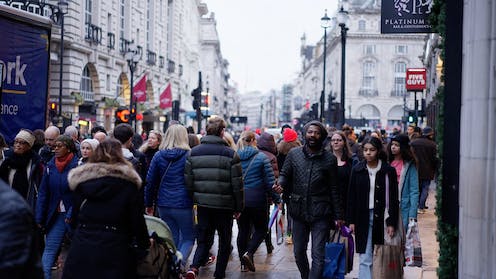 National census data is the best tool – the gold standard – for obtaining the full, detailed picture of how the UK’s population is changing at the local level. In November 2022, publication of 2021 census data on ethnic groups presented an unrivalled opportunity to gain insights into the changing ethnic mosaic of England and Wales.

Many media reports on the data focused on the growth of minority ethnic populations in cities including London, Birmingham, and Leicester. Local authority districts where white people no longer formed a majority of the population – so-called “minority-majority” places – drew special attention.

We have published the first peer-reviewed analysis of the geographies of ethnic diversity and residential segregation using data from the 2021 census. We also compared the results for 2021 with the three previous censuses from 2011, 2001 and 1991. We found that, increasingly, many places in Britain are most accurately described as highly ethnically diverse.

Our analysis showed that residential separation between people of different ethnic groups is decreasing. This new finding for 2021 confirms the steady decline in segregation noted in all censuses since 1991.

We argue that focusing on diversity and complexity is more helpful than framing the discussion in terms of a white majority and “non-white” minorities.

Population breakdowns by ethnic group for the most ethnically diverse districts outside London in 2021:

We analysed residential patterns of different ethnic groups at three geographic scales. First, England and Wales as a whole. Then, the 331 districts (or local authorites) of which the two nations are comprised. And finally, the 36 thousand local neighbourhoods into which those local authorities are broken down (specifically, what the Office for National Statistics (ONS) refer to as “lower layer super output areas”).

We found that the smaller the share of a district’s population that is white British, the greater the ethnic diversity of that district. Our research found that those places where white British as a group comprises less than half the population are, in fact, the most diverse places in England and Wales, home to sizeable proportions of people from many ethnic groups.

The most diverse district in England and Wales is the London borough of Newham, where people of Bangladeshi heritage had a 16% share of the population, followed by white British (15%), other white (15%), black African (12%) and Indian (11%). People from other ethnic groups made up the remaining third of Newham’s population.

Districts outside of London, of course, were also ethnically mixed. In Slough (the sixth most diverse district), the top four ethnic groups were white British (24%), Pakistani (22%), Indian (19%) and other white (11%). Further afield, in Manchester, the largest ethnic groups were white British (49%), Pakistani (12%), black African (9%) and other white (6%).

In population studies, to compare levels of ethnic diversity between places and over time, we can use the reciprocal diversity index (RDI), with scores ranging from zero (one ethnic group only in an area) to 100 (equal share of all ethnic groups). Our findings show that ethnic diversity in England and Wales has steadily increased: from 2.02 in 2001, to 3.56 in 2011, to 5.14 in 2021.

Reciprocal diversity index (RDI) scores across neighbourhoods in England and Wales for 2021:

Most neighbourhoods do remain majority white British, as do England and Wales as nations. The trend towards diversity, however, is unequivocal. People from many ethnic groups are living side by side not just in the biggest urban centres but in smaller cities, towns and neighbourhoods too.

Misleading narratives from populist politicians have long focused on a white/“non-white” framing of the population. A prime example was Nigel Farage’s response to the 2021 census data, in which he mistakenly claimed that “London, Birmingham and Manchester are all now minority white cities”.

The BBC and the Office for National Statistics promptly corrected this misstatement. They clarified the nature of the changing populations of these areas by distinguishing between people who identify as “white” (a broad grouping that includes Irish, Gypsy or Irish Traveller, Roma, and “other white”) or white British. The white population of Birmingham is slightly less than half, while for London and Manchester the share remains above 50%.

The collective that these labels purport to represent only serves to obscure the distinct inequalities associated with health, housing, employment, and education that people from individual groups face.

Adopting a binary “white/non-white” perspective on the changing ethnic mosaic of England and Wales is unhelpful. Its simplistic focus stokes anxieties about group differences and misrepresents the complexity of an ever more diverse Britain.

Gemma Catney and Richard Wright, along with Christopher D. Lloyd, Mark Ellis, Nissa Finney, Stephen Jivraj, and David Manley, co-authored the original paper (published in The Geographical Journal) on which this article is based.

2023-01-22
Previous Post: Kosovo: ethnic tensions have created a political ‘volcano’ that could erupt anytime
Next Post: Prince Harry says his military kills were like chess pieces – the problem of seeing war as a game