Calling politicians ‘clowns’ is a disservice to clowns – yes, really 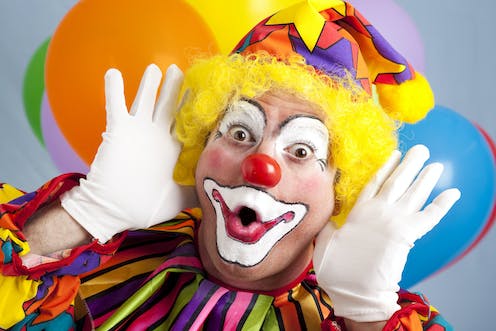 These are decidedly undeserved and pejorative representations – but not of the politicians.

It might surprise some to learn that clowns have a long history of contributing positively to politics and society. They have brought disruption, subversion, comfort and joy to healthcare, education and humanitarian efforts.

Earlier this year, clowns welcomed refugees at the border of Ukraine and Moldova as they made their way across from their war-torn homes. These clowns, from the Israeli Dream Doctors project, are part of a longer tradition of clowns in the medical domain. The front page of a 1908 edition of the French magazine Le Petit Journal showed clowns entertaining children in a London hospital ward.

The Gesundheit! Institute, founded by physician and clown activist Patch Adams, uses clowning to promote holistic models of healthcare around the world. The volunteer clowns involved see themselves as social activists. They are in good company with other, more politically-motivated activist clowns such as the Clandestine Insurgent Rebel Clown Army. This group came to prominence in protest against the war in Iraq, and reached a zenith at the G8 summit in Gleneagles, Scotland in 2005, armed with feather dusters and water pistols, camouflage gear and red noses.

Clowns and jesters have also contributed to some of the oldest educational institutions. There is evidence that “Mr Tripos”, a satirical jester-examiner, would sit upon a three-legged stool during early Cambridge oral examinations in the 15th and 16th centuries and would question the candidate, often through ridicule. Over time, Mr Tripos evolved into an entertainer rather than an examiner, introducing a level of subversion and ribaldry to these formal proceedings.

Some of the most influential clowns in history have been the jesters who spoke truth to power. In the royal courts of the medieval and Renaissance periods, their role was mainly to amuse and entertain, but in Europe and elsewhere in the world jesters would also challenge monarchs, holding them accountable while at the same time distracting the nobility from the monarch’s shortcomings.

Will Somers, one of the favourite jesters of Henry VIII, was a commoner elevated to the royal court, crossing those boundaries as only a jester or fool could. He was famed for his discretion but also his integrity. An anonymous 17th century biographer records that he would “tell the truth… to shame the Devil”.

Jesters also maintained peace in the community by preventing the missteps of the ruler.

In China, when the Emperor Qin Shi Huang (259–210 BCE) had completed the unification of the many state walls into one Great Wall, he decided that it would benefit from a coat of paint. It was only his jester Yu Sze who managed to forestall this project and save the many lives it would have cost.

In southern India, Tenali Rama, jester and advisor to the court of the emperor Krishnadevaraya, who ruled the Vijayanagar empire from 1509 to 1529, prevented the social unrest that would have arisen through the controversial promotion of a barber to the high Brahmin caste. This is just one version of a story about one of his many deeds, which are now the subject of children’s books and cartoons.

Send in the clowns

By no means is there demand for a true “coulrocracy” (governance by clowns), not even a clown minister – though a jester in the houses of Parliament would be very welcome. However, perhaps what has been missing from our political processes is the voice of mockery and reality that clowns and jesters provide, grounding our policymakers and preventing their greatest misjudgments.

We have the satirists of the modern media but these are outside of the court. They shout and throw epithets from outside rather than challenging and questioning from within. People in power would do well to embody some clown spirit and exercise clown principles.

In a recent study, our research team examined how the idea of “groupthink” (the desire for conformity and compliance which leads to poor decison-making) has been blamed for incidents including the Bay of Pigs invasion, the Challenger shuttle disaster and the COVID-19 pandemic.

Along with clown trainer Andrea Jiminez, we developed a set of clowning routines to help organisations challenge the characteristics of groupthink – invulnerability, fear, and moral and intellectual rectitude.

For those who find themselves unwilling to engage with clown training, there are many great clowns from whom to learn humility. Humanitarian Nalle Laanela, himself an accomplished clown, founded the Swedish chapter of Clowns Without Borders. In his Clown Manifesto, he lays out principles which would do well as moral guidelines for those who seek public office. Among his ten commandments, he tells us that the role of the clown is to “comfort the disturbed, disturb the comfortable”, “connect with your audience”, and most importantly, to “be real”.

In our politically turbulent era, when people have lost faith in their leaders and are dissatisfied with democracy, it may be time to send in the clowns – not send them off. Let’s just hope that after so many years of misrepresentation, they still want to play with us.

2022-12-24
Previous Post: Four ways to avoid gaining weight over the festive period – but also why you shouldn’t fret about it too much
Next Post: Royal warrants are good for business – and benefit the British monarchy too