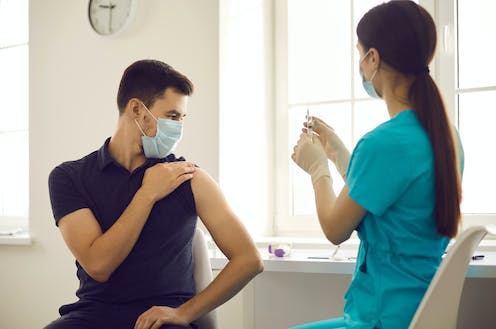 It’s been nearly two years since Margaret Keenan became the first person in the world to receive an approved COVID vaccine at a clinic in Coventry on December 8, 2020. Since then, almost 13 billion doses of various COVID vaccines have been administered globally. And they are estimated to have prevented millions of deaths.

Autumn boosters are available to people aged over 50 or with certain health conditions, as well as frontline health and social care workers, to maximise their protection ahead of winter. Of some 26 million people eligible for an autumn booster in England, more than half have now taken it up.

While prioritising higher-risk groups in the rollout of booster jabs has been the right approach, would it be worthwhile at this stage to extend the offer to UK adults under 50? The data isn’t yet conclusive on how effective this would be. But available evidence does indicate the benefits of a fourth dose would outweigh any risks for younger adults.

Like the UK, some countries have rolled out targeted booster campaigns, making fourth doses available only to vulnerable groups. For example, France, Italy, Germany and Israel offer fourth doses to adults over 60 or with underlying medical conditions, while the US offers second boosters to anyone over 50 or with a weakened immune system.

On the other hand, Australia not only recommends a fourth dose to adults over 50, but has also advised that anyone between 30 and 49 can receive one if they choose to.

Earlier in the pandemic, vaccine supply struggled to keep up with the huge demand, justifying the rationing and strict strategic planning with regards to the allocation of available doses. But vaccine shortages became less of an issue in the UK as demand fell.

Given this, and with different countries taking different approaches to eligibility for a second booster, it’s reasonable to question the best course of action.


What does the evidence say?

While there’s substantial evidence that fourth doses are effective at boosting the immune response and reducing the risk of death in older and vulnerable people, we have limited data on which to base the decision to offer them to healthy younger adults.

One study which was published in March 2022 showed that fourth doses of Pfizer or Moderna’s mRNA vaccines restored antibody levels in healthcare workers over 29 years old. Compared with a control group who had only had three doses, those who had four were slightly better protected against infection and symptomatic disease. But the authors remarked that “a fourth vaccination of healthy young health care workers may have only marginal benefits”.

Another study published in July 2022 looked at antibody levels after a fourth dose among a group of healthcare workers with an average age of 43. Based on the results, the authors suggested that a fourth dose could prevent severe cases of COVID and decrease hospitalisations in younger and healthy people.

Both studies reported only mild adverse effects, such as pain at the injection site, echoing broader evidence which demonstrates the safety of fourth doses.

At a time when the majority of the world’s population has developed some level of immunity against COVID (via vaccination, infection or both), does the possibly limited additional protection provided to young adults by second boosters justify the logistical and financial costs of administering them?

The limited availability of evidence on which to assess whether to offer the fourth dose to younger people constitutes somewhat of a “catch-22”. We need more data to be able to answer this question with certainty. At the same time, abundant additional data can’t be obtained without allowing healthy young adults to receive the fourth jab if they choose to.

That said, based on the available evidence there are two key factors that, taken together, suggest it might be worth extending the fourth jab offer to healthy people under 50.

The first is that COVID immunity (whether obtained via vaccination or infection) wanes over time, particularly with respect to new viral variants. The vaccines being given as fourth doses in the UK and elsewhere are called bivalent boosters, designed to provide broader protection by boosting immunity against both the original strain of the virus and the omicron variant.

The second important factor is that the adverse effects of COVID vaccinations are less frequent and severe than the well-documented consequences of the infection itself, many of which are long-lasting and not yet fully understood.

Read more:
What happened to the AstraZeneca vaccine? Now rare in rich countries, it’s still saving lives around the world


On balance, while we continue to gather and analyse evidence, it might be reasonable to extend the offer of a fourth dose to all adults under 50 on a voluntary basis. As a person in my 30s whose daily work involves teaching large groups of people, if I was offered a fourth dose tomorrow I would have no hesitation in taking it to protect myself and my students.

Alessandro Siani does not work for, consult, own shares in or receive funding from any company or organisation that would benefit from this article, and has disclosed no relevant affiliations beyond their academic appointment.

2022-12-01
Previous Post: Standon Calling 2023: When is it, tickets, line-up, and headliners
Next Post: Raf Simons to close – a fashion marketing expert explains how the brand lost relevance