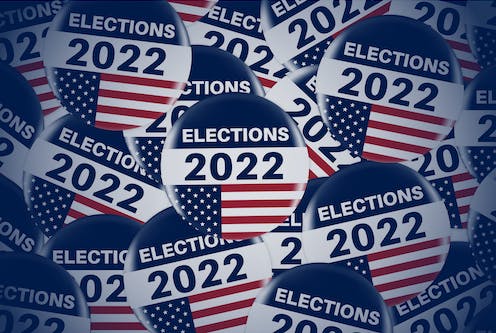 This year’s US midterms are on a razor’s edge.

In the summer it appeared the US supreme court’s ruling on abortion and some legislative successes – most notably Build Back Better, a post-COVID infrastructure and social policy package – benefited the Democrats. It was believed they would overturn the long-held pattern of the president’s party losing seats two years after election. But as autumn set in, the tide turned, with economic pains and crime rates thought to be fuelling a Republican resurgence.

With control of the House of Representatives now highly likely to pass to the Republicans, all eyes are on control of the US Senate. The chamber is currently controlled – just – by the Democrats and 35 of the 100 seats are in play.

The key races are in Georgia, Pennsylvania and Arizona, each with their own specific issues, including secret abortions, stroke recoveries and fake police badges.

So, who will win? I don’t know. But there are two places to get relatively unspun data on what might happen: polls and gambling markets or so-called “prediction markets”. As an anthropologist, I have been looking at the rise in political gambling throughout 2022 to find out how speculating on political events shapes how politics is understood.

Using the latest polling in the US Senate race in Georgia as an example, a big advantage of election polling is that it’s easy for the public to understand. Once the numbers are crunched they can be expressed as: “Herschel Walker is on 48.8% while Raphael Warnock is on 47.4%”, which looks just the same as the vote count will look. In other words, Herschel Walker is in the lead and will probably win.

But polling itself is inexact and difficult to get right. Assuming polling organisations are not manipulating their methods to get a result that favours their preferred candidate, they will nevertheless be playing “whack-a-mole” with different biases.

These can include how participants are selected or how the questions are asked . And compensating for one bias can potentially cause another.


The other issue is that polls can only ever measure a snapshot in time, and that snapshot is always in the past. In response to both these issues, informed audiences pay increasing attention to what’s known as “weighted polling averages”. These try to combine polls in a way that accounts for biases – such as compensating for how much Fox News polls typically overestimate Republican candidates or giving less weight to polls with a bad track record. The more bullish forecasters run projection models many times and report who wins most often.

At the time of writing, FiveThirtyEight, the highest profile of these organisations, has several different versions of its polling model. One based solely on weighted polling has the Democrats winning the Senate 55 times out of 100.

The “deluxe” model, which incorporates indicators such as fundraising and experts’ ratings, has Republicans winning a majority in 54 out of 100 runs of their model. But less than two weeks ago, the deluxe prediction was the opposite: Democrats won 54 times out of 100.

Political gambling, on the other hand, tells us something quite different. The odds simply tell you how much money you can expect to get – the rate of return – on different bets. In the UK, this rate has traditionally been set by gambling company employees called handicappers who have the job of making sure that bets are placed for both sides and that a profit for the companies is built in.

But the use of what’s known as betting exchanges has changed this somewhat. Betting exchanges are different to traditional betting sites in that they allow gamblers to bet against each other rather than a bookmaker.

Exchanges also allow players to bet against the odds of something happening. This is known as a lay bet or laying a bet, which simply means betting against an outcome. Most serious political gamblers bet with each other through the exchanges, where, for a fee, they can take either side of any bet, switching between being the bookie and the punter as and when it suits them.

One thing about the political gambling markets is that they are highly reactive to news. For instance, the Republican candidate for US Senate in Pennsylvania, Mehmet Oz, saw his odds shorten from 1.93 (52% likely to win) to 1.53 (65% likely) during his televised debate with Democrat John Fetterman. The latter visibly struggled to speak, clearly still affected by his recent stroke.

In this sense, markets react faster than the snappiest snap poll. The political gambling community itself would turn a pollster’s stomach. I have found it to be overwhelmingly made up of white, educated, males who are mathematically inclined and politically sophisticated (including a good number of politicians themselves). Yet there are quite a few statistical analyses that credit the markets collectively as more predicatively powerful than polls.

It’s also worth adding that the legal status of prediction markets and gambling on politics in the US is complicated at the moment. Many bets are placed but there’s a question mark over the legality of political betting as historically it was illegal in the US.

So, with all this in mind what can the polls and betting markets tell us about the results of the US mid-terms? On the British outlet Smarkets, the Republicans gained the upper hand decisively on the 20th of October – 11 days before they did on FiveThirtyEight.

On US and cryptocurrency sites, such as PredictIt and Polymarket which style themselves as “prediction markets”, the shift came earlier still.

Prices on Smarkets rate the Republicans as 65% likely to control the Senate. Punters are significantly more bullish on this than the predictions of FiveThirtyEight (45% on polls alone, 54% with other metrics) and most other polling aggregators.

Who is correct? We will soon see. I do have one prediction though, the more tumultuous and data-heavy our democratic politics becomes, the more influential the highly reactive odds from political gambling will be.

Anthony Pickles receives funding from the Independent Social Research Foundation. He has bet on the outcome of the US midterms as a part of his anthropological fieldwork using the betting exchanges on Smarkets and Betfair,

2022-11-08
Previous Post: Twitter job cuts: what are digital layoffs and what do they mean for employees and companies?
Next Post: Four common misconceptions about quantum physics