Ukraine war: Putin is rewriting the rules of siege warfare this winter 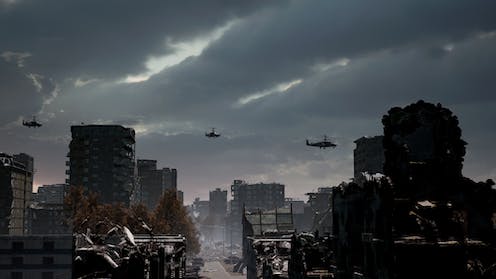 The Russian military – under instruction from Vladimir Putin – is rewriting the rules of siege warfare for the 21st century. The classic definition of a siege is: “The process of surrounding and attacking a fortified place in such a way as to isolate it from help and supplies, for the purpose of lessening the resistance of the defenders and thereby making capture possible.”

But in the Ukraine war, Putin has unleashed a series of localised sieges over towns and districts in cities, as was seen with the 80-day siege of the Azovstal steel works. Russia cannot create a physical siege of the whole of Ukraine (akin to a blockade) because relief routes open through Poland, Slovakia, Hungary and Romania mean that Ukraine can receive and move goods through multiple entry points.

Putin’s use of these town-by-town siege tactics is putting another source of pressure on the Ukrainian government, Ukrainian citizens and their international allies this winter.

Having had his original plan of a rapid conquest defeated at first contact with the enemy, Putin’s strategy now depends upon being able to divide or break Ukrainians and Ukraine’s allies. This change of strategy is driven by the inescapable truth on the battlefield that the Russian military is struggling to hold the ground it occupies and create stable lines of defence for the winter.

Siege tactics – to deny supplies of food, and the energy to cook, to heat and deliver essentials – aim to undermine the ability or will of the local population to resist. The central equation Putin wants Ukrainians to get to is: is this worth the fight? Currently, sufficient numbers of Ukrainians view these tactics as a sign that the Russian military are faltering and that desperate measures are being employed.

Russia’s secondary ambition through laying siege is to create an ever larger reconstruction bill for Ukraine and its allies: now estimated to be €349 billion (£304 billion). When the EU pledged to rebuild Ukraine, it effectively pledged itself to a second Marshall Plan, like the one the US funded to reconstruct Europe after the second world war.

Whether the EU is politically able to sustain the economic effects of the conflict beyond this winter, or find the collective will to pay for the eventual reconstruction of Ukraine, without undermining its own unity and existence, are open questions.

On October 31, the mayor of Kyiv said that 80% of the population were without running water because a pumping station had been bombed. Kyiv and Kharkiv has reduced the number of electricity-dependent metro services to petrol and diesel equivalents to reduce the pressure on the grid.

The Russian government has also reneged on grain export agreements (and then suggested it would honour its original position). This is creating a spike in the wholesale price of bushels pushing up prices in the shops and creating food shortages. Because land routes to the west remain open, there is a fallback plan to move grain overland instead, but this will only provide partial relief.

Read more:
Ukraine war: another round of pointless and dangerous escalation as Putin blocks grain exports


Direct siege warfare, as seen in Mariupol and Kharkiv, has consisted of Russia blocking the routes out of these cities. It also involves depriving the population of food, water, medicine, and utilities while conducting indiscriminate artillery and cluster bomb assaults.

Agreed “safe corridors” to allow noncombatants to leave Mariupol were frequently targeted by Russian artillery. Direct siege tactics are of questionable international legality, while the deliberate targeting of citizens is a clear breach of international law.

Attacks on the Ukrainian population aim to undermine their confidence in their government and to diminish their desire, or ability, to resist the Russian military. History shows that the exact reverse is more common: citizens under fire prefer their own leaders, even ones they oppose, to those attacking them.

The Russian military – even with Iranian help – do not currently possess enough weaponry to break the will of the Ukrainians. But they can maintain significant pressure on Ukraine’s allies and this is where the centre of gravity in the conflict currently sits.

Russia prides itself on its survival and victory in the second world war. Named the great patriotic war by Russians, it included barely imaginable losses and great suffering of its people. A key moment in that conflict was repelling German Nazis from their iconic siege of Stalingrad.

The wrong lessons from history have been learned by the Russian government. In allowing Russian siege tactics to continue, pressure is increasing on Ukraine’s allies to increase their direct military aid.

Air defence technology would help to protect Ukrainian cities but would result in a strong Russian response. Navigating these sensitive judgements requires dialogue and trust: commodities that are in short supply currently.

Robert M. Dover does not work for, consult, own shares in or receive funding from any company or organisation that would benefit from this article, and has disclosed no relevant affiliations beyond their academic appointment.