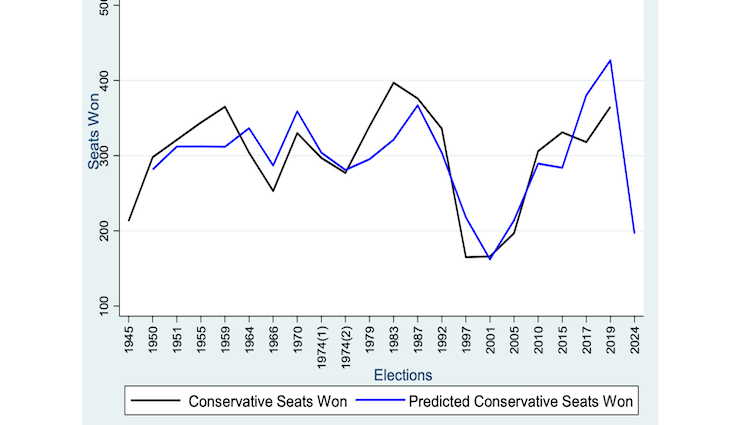 With the UK’s new prime minister in office, it looks like the political turmoil of the last few months is likely to ease, at least for the time being. Rishi Sunak and his fellow MPs must put their political differences aside to focus on stabilising the economy and calming financial markets. But Sunak will of course have one eye on the next election, which he must call before January 2025.

It might seem ambitious to predict what will happen in that election. Indeed, pollsters always emphasise that the information they give us about what voters think represents a snapshot of the current moment rather than a prediction. They are projections of what would happen were an election held immediately rather than in a few years time. The huge volatility of voting intentions in the polls taken since the last general election reinforces this point.

But if you look at polls over a very long period, you can see there is a lot of inertia in voting intentions. It is true that major shocks such as the financial crash of 2008 or the Brexit referendum in 2016 can change the public’s minds quite rapidly, but if we zoom out to take in a long enough time period these shocks to the system tend to average out.

This fact is the basis of an electoral forecasting model known as the seats-votes model. The model is based on an earlier analysis of the relationship between vote shares and seat shares in the House of Commons in general elections, known as the law of cubic proportion.

This was formalised by statisticians Kendall and Stuart in a landmark paper published in 1950 which represents the starting point of electoral forecasting in Britain. There is an advantage in focusing on seats rather than vote shares, since parties win general elections in Britain by gaining a majority of seats in the House of Commons, not a majority of votes in the country.

The seats-votes model is very simple. It predicts seat shares in elections for the political parties in the House of Commons based on the seats won in the previous election, updated with current voting intentions in the polls. The inertia in voting intentions means that we don’t have to wait until just before an election to predict what is likely to happen. Instead, we can use voting intentions in the polls many months prior to the election, although the strength of the relationship between current and past polls weakens the further back in time we go.

May is the most common month to have a general election in Britain. Of the 21 national votes that have been held since the second world war, six have taken place in May. With that in mind, let’s assume that the next general election takes place in May 2024, in 19 months.

We do this using the Pollbase database created by the prolific polling analyst, Mark Pack. This database has voting intentions data which goes back to 1943. For example the Conservatives took 44% of the vote when Margaret Thatcher won the 1979 election and a Gallup poll conducted 19 months prior to that election predicted they would get 45%

Conservative seats won and predictions of seat wins, 1945 to 2024

That said, the party did better than predicted in 1959 under Harold Macmillan and the model did not pick up the surge in support for the party in the turbulent years of the 1970s, when Labour was in power. It did, however, pick up the loss of support for the Conservatives when Tony Blair won the 1997 election.

On course for a big loss

The actual seat total line ends in 2019 but the forecast continues further. It predicts that the Conservative party would win just 196 seats if an election were held in May 2024. This is based on the 365 seats the party won in the December 2019 election and their voting intentions in a YouGov poll completed on October 22 which gave the party 19%.

The poll was conducted just before Sunak became prime minister, so things were really bad at that time. If he experiences a honeymoon then Conservative vote intentions should increase and the loss of seats would not be so large. But overcoming a deficit of this size and subsequently winning the general election in 2024 looks extremely unlikely.

If the Conservatives lost 169 seats compared with the 2019 total it would amount to a catastrophe. Many prominent figures, most notably former prime minister Boris Johnson, would lose their seats to Labour. The chancellor of the exchequer, Jeremy Hunt, could lose his seat to the Liberal Democrats.

In the absence of a major shock to the system, the Conservatives should expect to be in opposition for some time after the next election.