ROGER FEDERER is well renowned as one of the most stylish, smoothest sportsmen of all time.

But it wasn’t always this way, with the Swiss maestro’s teenage bedroom looking much like any other 17-year-old’s… although perhaps with a few extra trophies.

In a picture doing the rounds on social media, Federer, aged 17, grins for the camera looking totally different to the sophisticated star we see today.

Decked out in a baggy Nike sweatshirt, the future 20-time Grand Slam winner showed off his room for the camera.

Adorning the walls were posters of his teenage heroes. 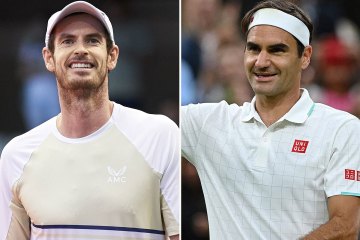 These included Pamela Anderson in her Baywatch pomp, as well as NBA legends Michael Jordan and Shaquille O’Neal.

A few other random items could be seen dotted around, including a cowboy hat, Montenegrin flag and a mini basketball hoop.

Sat on his mantelpiece were a few trophies, and there would be many, many more to come.

It took Federer another five years from this point to win his first Major, when he triumphed at Wimbledon for the first time in 2003.

Seven more titles would follow in SW19, as well as six Australian Opens, five US Opens and one French Open.

Federer won an astonishing 103 singles titles in total, as well as an Olympic Gold medal in doubles at Beijing 2008.

He played his final match at the Laver Cup, partnering Rafael Nadal in a thrilling defeat to Team World’s Jack Sock and Frances Tiafoe.

A tearful Federer thanked the 02 Arena crowd after the match, also sharing one last courtside moment with a visibly moved Nadal.

2022-10-27
Previous Post: Four of Shakespeare’s plays and how they speak to the current political situation in Britain
Next Post: The jury that asked the spirit world for a verdict – and other bizarre tales from the courtroom