Curious Kids: what is snail slime – and why is it shiny? 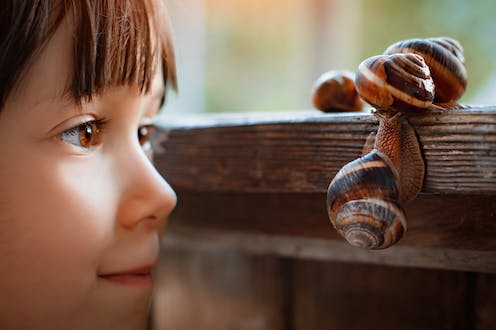 Snails produce a lot of slime, and it is incredibly useful to them.

Snail slime is made of a mixture of substances. It is mostly water mixed with proteins and some carbohydrates and minerals, formed into a sort of jelly. This jelly is called “mucus”. It’s not that different to the snot that comes out of your nose when you have a cold.

Snails produce two types of mucus. The bit of the snail that you can see outside of its shell, touching the ground, is called its foot. The snail moves the muscles in its foot in waves to move along the ground. The waves can only go in one direction, so a snail cannot move backwards. It has to slowly turn around if it wants to go back the way it came.

Curious Kids is a series by The Conversation that gives children the chance to have their questions about the world answered by experts. If you have a question you’d like an expert to answer, send it to [email protected] and make sure you include the asker’s first name, age and town or city. We won’t be able to answer every question, but we’ll do our very best.

The mucus from the snail’s foot helps it move along smoothly, and also helps the snail to stick to whatever surface it is on. This means that snails can crawl up a wall and upside down across the ceiling.

Another kind of mucus comes from the snail’s body. One of the reasons it does this is to stop the snail from drying out. Although a snail has its shell to hide in, as soon as it comes out, it is at risk of drying out because it has a soft body. Having a coat of mucus helps keep the water in.

Snails also leave a chemical trail in their mucus that other snails can use to find them, such as when they are looking for a mate. However, this chemical trail also allows animals who might want to eat the snail to follow the trail along too. For example, not all snails feed on plants and there are predatory snails that hunt and eat other snails.

If it can, a snail will hide in its shell if something attacks it, but sometimes this is not enough. The snail can defend itself by producing lots of mucus from glands on its body. When this mucus is released, it mixes with air to produce a sticky frothy coat. This makes for a very nasty mouthful for the predator.

Snails produce mucus over their whole body and it is being made all the time. Anything that attaches to the mucus will soon be left behind as the snail sheds its mucus and makes more. This means that any nasty germs that stick to the mucus are shed before they can reach the snail’s skin underneath.

But why are snails’ slime trails shiny? Slime comes out of the snail in a thin layer. At first, it is moist and very smooth. So the slime acts like a mirror and that is why it appears shiny. When it starts to dry out, it becomes more uneven and loses its shininess.

We humans also make mucus inside our bodies, and often for similar reasons to snails. For example, we need to move food from our mouth to our stomach and through our guts. We do this with waves of muscular contractions, and the mucus helps everything move along smoothly.

A coat of constantly moving mucus gets rid of germs and so we produce a lot of mucus – snot – in our nose when we have a cold.

Scientists, including us, have found that slime from some snails can kill nasty bugs that can make people ill. In the future, snail slime could be used to help cure some diseases.

2022-10-27
Previous Post: Kylie Minogue is ‘ready for new music’ as she focuses on next album
Next Post: Long COVID: how lost connections between nerve cells in the brain may explain cognitive symptoms