United eased to a comfortable 2-0 victory in Moldova thanks to goals from Sancho and Cristiano Ronaldo.

CR7 broke his goal drought and Sancho sent Gareth Southgate a message after missing out on the England squad.

The winger bagged his third goal in six games after being allowed freedom to roam centrally by Erik ten Hag.

Asked about Sancho operating centrally, Ten Hag said: “In preparing the goal with Bruno [Fernndes], he was in the centre-forward position.

“We did some experiments, bringing Tyrell [Malacia] on the right and Luke [Shaw] on the left, we can be very able, we need that in the season.” 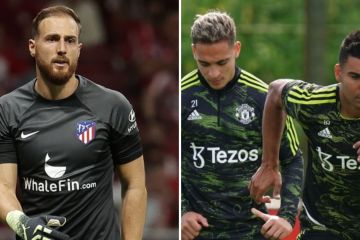 Malacia started at left-back for the sixth game running but he switched to an familiar right-back role after Ten Hag decided to bring on Luke Shaw for Diogo Dalot.

The Red Devils boss made no secret of his desire to sign a right-back in the summer and he appears to be thinking long-term by testing Malacia’s suitability in that position.

Ten Hag was also asked about the Ronaldo breaking his goal drought as well as Sancho and Marcus Rashford’s continued exclusion from the England squad.

The Dutchman said of the pair missing out: “It’s not up to me, it’s the manager of England, I cannot be in his seat, I don’t want to do it.

“They are progressing, they are starting the season well, they will progress even more, I am convinced of that.”

Ten Hag also claimed Ronaldo is totally committed to the project at Old Trafford and he expects the Portuguese to start scoring more regularly.

He added: “He’s really close, when he gets more fitness he will score more.

“He’s totally committed to this project, totally involved, he also has connections that are coming around him (on the pitch) and he is constructing connections so I’m happy with that.”