MAX VERSTAPPEN can win a second consecutive world title at the next Grand Prix in Singapore – FIVE races before the season ends.

The Dutch driver registered a fifth consecutive win, and 11th of the season, at the Italian GP on Sunday.

The 2021 champion now has a 116 point lead over his nearest rival, Charles Leclerc, after a dominant campaign behind the wheel.

Verstappen has been in a different league to everyone else, and can wrap up the title when the action resumes in October.

The Russian GP was scheduled to be next on the calendar, but the race was postponed following the invasion of Ukraine earlier this year.

That means the Singapore GP on October 2nd is the next chance for points. 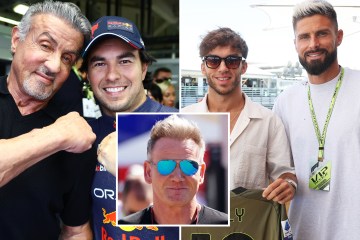 The title will be his for a second year on the bounce if he extends his lead to 138 points by the end of that Grand Prix, with five races and one sprint race remaining.

That would be the case if Verstappen wins the race, and Leclerc finishes ninth or lower.

He also leads Sergio Perez by 125 points, and George Russell by 132 points.

The Dutch driver has the record for most wins in a season firmly in his sights.

The current record of 13 wins in a season is held by Michael Schumacher and Sebastian Vettel.

But with six races left, Verstappen needs to win just three of those to become the outright record holder.

While the record for most consecutive race wins could be on the card.

Another record held by Vettel, who won nine races on the bounce in 2013.