Sports historians may one day pinpoint this US Open as the moment when the Big Three of Roger Federer, Novak Djokovic and Rafa Nadal were finally overtaken by the inevitable rise of the Next Generation.

And the leader of this new era is a prodigious Spanish teenager who empathically lifted his first major championship – while also becoming the sport’s youngest EVER male world No.1.

Ever since he burst on to the scene as a 16-year-old professional in February 2020, many experts have tipped Alcaraz to become a potential major champion at some point in his career.

But it is likely he will have astonished all those astute observers by accomplishing the feat in just his EIGHTH main draw Slam appearance.

A thrilling and entertaining 6-4 2-6 7-6 6-3 victory over Casper Ruud delighted the 24,000 fans under the Arthur Ashe Stadium roof, who often gave both aces a standing ovation in recognition of the superb tennis on display. 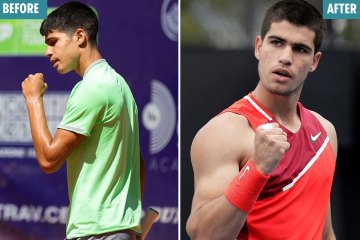 At just 19 years old, Alcaraz is the first teenager to sit atop the ATP world rankings – and the first teen to lift the US Open men’s title since 1990 champion Pete Sampras.

After his victory, the Spaniard wiped away the tears and said: “This is something I dreamt of since I was a kid. To be world No.1, to be a champion of a Grand Slam, I’ve worked really hard for this.

“There are a lot of emotions right now. This is something I tried to achieve, all the hard work I did with my team and family.

“This is really, really special for me. My mum and granddad are not here. I thought about them. A lot of family are here but there are people couldn’t come to watch the final. I was thinking about them.

“I’m a little bit tired. But there is no time to be tired in the final round of every tournament. You have to give everything inside. That is something I work really hard on.”

As he showed earlier this year in Madrid when he knocked out Nadal and Djokovic in consecutive rounds, Alcaraz has the tools to win multiple tournaments at the highest level – provided, of course, he stays fit and injury-free.

Coming into this final – which took place on the 21st anniversary of the 9/11 terrorist attacks in New York – Alcaraz had spent a record 20 hours and 19 minutes of combat on court.

Somehow he managed to eliminate Italian Jannik Sinner in the quarter-finals despite saving one match point and the tie finishing at a ridiculous 2.50am.

His energetic style of play and engaging personality meant the majority of the supporters, a number of them hailing from the Hispanic community, were rooting for him to succeed.

And though former tennis star Pam Shriver claimed she had seen him limp in his warm-up, Alcaraz showed no signs of physical fatigue as he broke the Ruud serve decisively in game three of the first set.

This encounter was played in a good, competitive spirit, typified by the moment Ruud conceded a point in game eight after confirming it came via a double bounce.

Ruud, who had a 55-shot rally in the semi-final, is an intelligent player and one hell of a grafter and he levelled up in the second set thanks to two breaks of serve.

And the Norwegian – who would have been world No1 if he had succeeded here – had two set points in the third set.

Those opportunities in game 12 were never taken by the Oslo slugger and then Alcaraz prevailed in the tie-break, winning seven of the eight points to move 2-1 ahead.

Ruud – who lost to Rafa Nadal in the French Open final in June – deserves credit for the way he hung in there over more than three hours.

But Alcaraz – who found so much luck with the drop shot and net play – fulfilled his destiny in the fourth set as he fired down an irretrievable serve and fell to the floor in celebration.

Ruud, 23, will become the world No.2 when the rankings are published on Monday. He said: “This was a special evening, both Carlos and I, knew what was at stake. To see us at the top of the rankings is fitting.

“I’m disappointed, of course, that I am not No.1 but No.2 isn’t too bad either. I will continue to chase my first Grand Slam and the world ranking.”

Some will argue that the rankings have been utterly skewed this year and others will point to the absence of Novak Djokovic from Flushing Meadows due to unvaccinated status.

They will be right, of course, but you sense Alcaraz will love the challenge of proving them all wrong.

2022-09-11
Previous Post: Disney surprises fans with exclusive looks at snippets from Avatar sequel
Next Post: Seven times people discovered the Americas – and how they got there