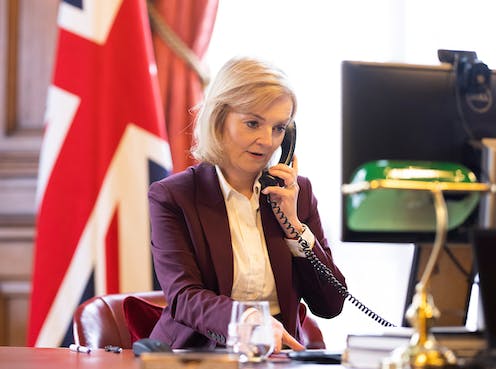 Ever since climate change appeared on the political agenda, there has been general agreement on the need for a robust response. While the implementation of climate policy has lagged over the past decade, that basic consensus has held. Liz Truss’s new government puts that under serious strain.

There are a number of components to worry about. First of all, the job of coordinating climate policy has gone to Jacob Rees-Mogg, a man with a history of climate denial who continues to decry “climate alarmism”. He is open in his hostility towards the pursuit of net zero and brazen in his support for fossil fuels.

The prime minister herself has extensive connections to organisations opposing climate action. She is also a vocal advocate for the role of gas as a transition fuel.

Truss is more ideological than her predecessor. Boris Johnson’s opportunism often created openings for climate action that served other elements of his agenda. His support for wind turbine manufacturing in red wall seats is evidence of this. Driven by an ideological commitment to “free markets”, Truss is less likely to take such an approach.

There are some appointments that offer optimism. The new junior minister for climate change, Graham Stuart, has consistently pushed for renewables. While the former climate minister, Chris Skidmore, has been appointed to lead a review of the UK’s net zero strategy.

However, the decision to select a loyal cabinet with questionable environmental credentials indicates a sharp shift away from previous commitments to climate action.

Fossil-fuelled response to the energy crisis

The new government’s response to the energy crisis reflects this. So far, the focus has been on expanding fossil fuel supply. Up to 130 new licences are being approved for North Sea oil and gas drilling, while plans to overturn the moratorium on fracking have been announced.

Neither fracking or North Sea gas exploration will have an immediate impact on natural gas prices. New production will not come on stream immediately and even when it does the supply will remain relatively small.

The populist rhetoric about protecting people from rising costs has seen heat pumps, electric vehicles, and renewables all attract blame. However, the £130 billion being borrowed to cap energy bills will help energy corporations far more than poor households.

These actions will undermine attempts to eliminate fossil fuel consumption, instead consolidating more capacity for years to come. Oil and gas companies can also be expected to fiercely resist future attempts to reverse this move.

Measures consistent with net zero instead have the potential to address the energy crisis and should be prioritised. Enhancing energy efficiency, insulating housing, and accelerating the shift away from natural gas could have an immediate impact on energy demand. However, these measures would undermine the oil and gas industries to which the new government is allied, making their adoption improbable.

How severe is the threat?

Whether UK climate policy will be watered down depends on factors beyond the prime minister’s immediate control.

Legislation, including the Climate Change Act, has so far been effective in constraining governments from relapse. Its structure of five-year carbon budgets, and external scrutiny has generally kept policy moving forward.

There is also organised support for climate action within the Conservative party. The influential Conservative Environment Network, with a membership of 133 MPs and 17 members of the House of Lords, resist reversals on climate action. They have immediately pressured the new government over their net zero commitments.

How effectively they oppose policy shifts will depend on various factors including their own political ambitions and electoral situation. However, fracking and the expanded fossil fuel production are deeply unpopular with the public, which will further help the group. Organised parliamentary support for climate action, if it materialises, can restrict how far climate policy can be undermined.

The situation the new prime minister finds herself in is both novel and politically delicate. She is the first prime minister to be elected against the wishes of the majority of her own party’s MPs. This may weaken her ability to pass legislation. The decision to select a loyal cabinet, forming a narrow range of opinion may intensify the problem she faces.

While the new government represent a threat for UK action on climate change, their ability to inflict damage to climate policy will be restricted. But, immediate risks remain regarding expanded hydrocarbon production. This undermines the pursuit of net zero while doing little to relieve pressure on energy prices.

Matthew Paterson has previously received funding from the Social Sciences and Humanities Research Council (Canada). He is a member of the Green Party.