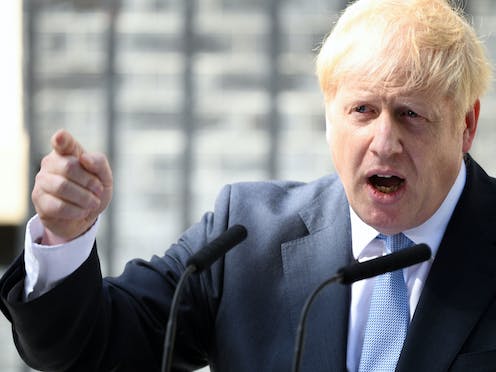 Boris Johnson’s time as prime minister comes to an end next week, giving us all a chance to consider what his legacy will be. More than his predecessors, Johnson owed his premiership to his reputed ability to persuade audiences other Conservatives couldn’t, through his charisma, unpredictability and energetic campaigning.

His rhetorical flair continued once he was in Number 10, though frequent fumbles may last longer in collective memory. Here are five quotes that define Johnson’s time as PM.

The doubters, the doomsters, the gloomsters – they are going to get it wrong again. The people who bet against Britain are going to lose their shirts.

This quote, from his first speech as PM shows Johnson’s main strategy during his early premiership, which was to attack his opponents’ character. Instead of disproving arguments about Brexit directly, he urged audiences to view warnings as evidence of doubters’ negative attitudes, not evenhanded assessments.

Johnson framed politics as a choice between those who backed Britain, and those who bet against it. This was his version of a traditional right-wing populist framing, which divides patriotic supporters from treacherous opponents. His characteristic move was to keep this aggressive division, but soften its terminology.

The weeks ahead will be the hardest yet but I really do believe that we are entering the last phase of the struggle. Because with every jab that goes into our arms, we are tilting the odds against COVID and in favour of the British people.

Thanks to the miracle of science, not only is the end in sight and we know exactly how we will get there. But for now, I am afraid, you must once again stay at home, protect the NHS and save lives.

Emerging just months after his election victory, coronavirus dominated Johnson’s premiership. This quote, from the end of a January 2021 broadcast announcing a third national lockdown, shows Johnson’s typical approach to the pandemic.

It carefully balances warnings about the seriousness of the immediate situation with optimistic predictions for the future. The opening line shows traces of the wartime metaphors from earlier speeches, and the final line returns to the most effective example of his instruction-giving rhetoric.

However, it also reveals Johnson’s key challenge: fending off simultaneous criticisms that he was too slow or too quick to impose restrictions. The complexities of transmission rates forced Johnson to address this criticism using a more evidence-led style that acknowledged uncertainty.

His speeches had to explain why the statistical evidence supported one course of action over another. This didn’t play to his strengths, but vaccination rates (once available) became a simpler measure of progress and enabled him to return to a more confident style.

We have one of the most imbalanced societies and lopsided economies of all the richer countries … What monkey glands are they applying in Ribble Valley, what royal jelly are they eating, that they live seven years longer than the people of Blackpool only 33 miles away?

Johnson had difficulty explaining what his “defining mission” of “levelling up” meant in practice. This quote from his 2021 party conference speech was one attempt to do so in keeping with his personal style.

Establishing himself as a teller of uncomfortable truths through the first line, he argues that disparities within regions showed the problem is not simply a north-south divide. Here, half-comic references to age-prolonging remedies overwhelmed the life expectancy statistic used to illustrate these disparities.

The references chosen maintained his persona as an eccentric but authentic politician. Eccentric because they suggest the kind of worldly knowledge that might come easily to an imperial, gentleman explorer, but authentic because they are just beyond what the audience imagines he’s advised to say.

At conference, the line worked well enough. But in longer speeches, lines like this obscured his point and his eagerness to get to them made him seem unprepared and rambling.

Nobody told me that what we were doing was – as you say – against the rules, that the event in question was something, that we were going to do something that wasn’t a work event, and as I said in the House of Commons when I went out into that garden I thought I was attending a work event.

Interviews were always Johnson’s weakness. This example followed accusations that he had been present at a “bring your own booze” Downing Street party in May 2020 in spite of coronavirus restrictions.

Asked whether he had lied to Parliament about having prior knowledge of the event, his answer shows a moment when Johnson’s ability to identify and use the public’s sense of everyday reasoning failed him. Whatever he believed, his defence did not align with the common belief that someone who sets rules should know the rules – and that most people know what kind of event they are at.

Read more:
Downing Street party: what the law actually said about work gatherings in May 2020


As we’ve seen at Westminster, the herd is powerful and when the herd moves, it moves. And my friends, in politics, no one is remotely indispensable.

Johnson’s resignation speech drew a contrast between Westminster politicians and the public, and allowed him to frame events to his advantage. Explaining his fall as the result of an irrational move on the part of his MPs minimised his own role in losing the confidence of his cabinet.

The fatalism in this final quote provides a neat counterpoint to his early talk of doomsters and gloomsters. Johnson launched his premiership by projecting absolute certainty about his ability to lead where others could not. He ended it with an attempt to make his exit seem more dignified, casting himself as a leader who accepts the certainty of a fate at the hands of others.

James Freeman does not work for, consult, own shares in or receive funding from any company or organisation that would benefit from this article, and has disclosed no relevant affiliations beyond their academic appointment.

2022-09-02
Previous Post: Why DeepMind Is Sending AI Humanoids to Soccer Camp
Next Post: Sir Elton John: Success of Britney Spears collaboration is all about her