LISANDRO MARTINEZ is proving pundits wrong about their fear over his height as he continues to shine in the heart of defence for Manchester United.

The 24-year-old starred for the Red Devils in their 1-0 away win at Southampton to help his side jump up to seventh in the table.

Martinez was named as the man of the match in the victory down on the south coast as United kept a clean sheet for the first time this season.

Much has been said about Martinez’s 5ft 9in height and that he wouldn’t be able to cope with the physicality of Premier League defenders.

He struggled in the 4-0 defeat against Brentford in West London where he was hauled off at half-time.

It led Liverpool legend Jamie Carragher to question his arrival at Old Trafford as he insisted he will be targeted repeatedly. 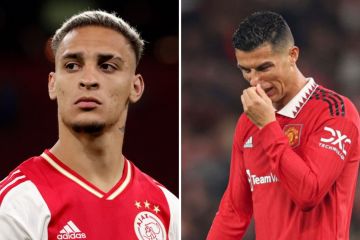 Meanwhile United icon Jaap Stam also laid into the Argentina international as he warned Erik ten Hag his team will keep on conceding if he persists with Martinez at centre-back.

But Ten Hag kept his trust in the ex-Ajax ace in the following match against Liverpool, where he dazzled in the 2-1 victory.

And Martinez yet again proved why United splashed out £55million to bring him to the club after his impressive outing at St Mary’s.

His incredible heading stats have been highlighted by @StatmanDave, with Martinez boasting better figures than the likes of Kalidou Koulibaly and Ruben Dias.

The stats show that Martinez has won a whopping 83 per cent of his aerial duals in the top-flight this term.

It shows that it is a myth that the two-time Eredivisie winner will struggle to win headers in the air.

Martinez also has better stats than Arsenal’s 6ft 4in mountain William Saliba, who has won 57 per cent of his headers.

And Liverpool’s Joe Gomez has won 56 per cent of his aerial duals.

Martinez will get a chance to improve on his stats when United face Leicester in Thursday’s midweek clash at the King Power Stadium.