A MUM says she wept after allegedly clashing with “arrogant” Cristiano Ronaldo in a phone call when the ace smashed her teen son’s phone on the ground.

Sarah Kelly, 37, spoke out after the Manchester United striker accepted a caution for an incident at Goodison Park last season.

The champ appeared to slap Jacob Harding’s hand as he left the pitch after his side were beaten by Everton.

He later apologised to the 14-year-old, who has autism.

Earlier this month, the Portuguese star was interviewed by police under caution in relation to an alleged assault and criminal damage. 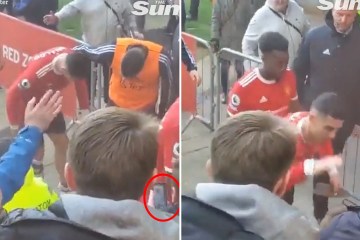 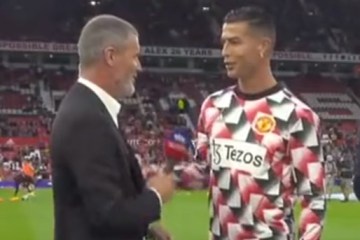 But Sarah says she feels cheated – and claims Ronaldo has not even offered to replace the smashed phone, the Mirror reports.

She was allegedly contacted by the player by telephone in the days after the incident but claims she was left “shaking and crying” because of his attitude.

Ronaldo allegedly told her he hadn’t “kicked or punched anybody” during the chat.

“I was raging and my heart was pumping,” she said.

Both Sarah and Everton fan Jacob have also been targeted by trolls.

“It was disgusting. My boy has a heart of gold,” she said.

“I’m scared to leave the house, always looking over my shoulder.”

“I want to see justice because there hasn’t been any,” she said.

Jacob told the paper: “I looked up to him but he didn’t set an example that day.”

It is understood that Ronaldo has agreed to compensate the Jacob and his mum.

Man Utd bosses confirmed they won’t be taking action back in April.

Chiefs are believed to be happy with the ace’s apology.

In a post online, Ronaldo said: “It’s never easy to deal with emotions in difficult moments such as the one we are facing.

“Nevertheless, we always have to be respectful, patient and set the example for all the youngsters who love the beautiful game.

“I would like to apologise for my outburst and, if possible, I would like to invite this supporter to watch a game at Old Trafford as a sign of fair-play and sportsmanship.”

He had been visibly angry as he made his way off the turf following the Red Devils’ dismal loss at the hands of struggling Everton.

The United superstar appeared to lash out as he headed back to the away team dressing room.

2022-08-22
Previous Post: Workplace romance: four questions to ask yourself before dating someone from the office
Next Post: Student Living & Guest Experience Receptions Supervisor