What ethical standards should we hold politicians to? A philosopher explains two different approaches 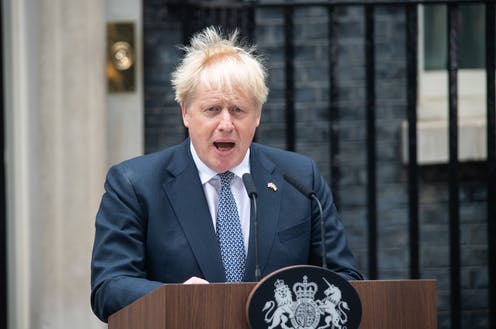 With Boris Johnson’s departure, the drama of the Conservative leadership election, and Keir Starmer’s declaration that “integrity matters” in politics, the question of what ethical standards we ought to hold politicians to has never felt more pressing in the UK.

The idea that ethics has anything to do with politics is often (justifiably) met with some degree of scepticism. As philosopher Michael Walzer notes, it is conventional wisdom that politicians are “a good deal worse, morally worse, than the rest of us”.

There are two arenas where the ethics of politicians come into play. First is in their political work: putting their personal scruples aside to achieve noble political goals, engaging in “dirty deals”. The other is, of course, in their private lives: the sex scandals and other personally unethical behaviour that are characterised in Britain as “sleaze”.

To decide how to judge politicians who engage in either of these activities, we can turn to a philosophical debate between so-called “realists” and “moralists”.

In political philosophy, the realist views politics as a different world from everyday life, where different values apply. In contrast, a moralist believes that the same ethical standards (perhaps even higher standards) apply in politics as in everyday life. As political scientist Richard Bellamy puts this, we “desire better of those that represent us because we expect them to serve our interests rather than their own”.

In a recent interview, Allegra Stratton, Boris Johnson’s former advisor suggested that her former boss thought that politicians who acted on principle ought to be criticised for being “not political enough”. This chimes with the realist view, that the correct ethical standards for politicians are specific to politics.

As realist thinker Edward Hall puts it, “Responsible politicians do not seek to manifest a ‘purity of intention [which] is unconditioned by the need to compromise, negotiate, [or] exercise authority over others’, because such a view is deeply anti-political”. This sentiment is echoed in Machiavelli’s famous exhortation that the political leader must “learn how not to be good”.

For the realist, then, we should favour politicians who are prepared to engage in dirty deals in pursuit of good political goals.

A pure moralist reading of Stratton’s comments might say that we should never tolerate politicians who are willing to compromise on their personal ethics in order to pursue good results. However, this take looks implausibly strong when you remember that moralists believe the same ethical standards ought to apply in politics as in everyday life.

In ordinary life, using a bad means to achieve a good end is sometimes ethically acceptable, perhaps even required. Research shows that we are all willing to prioritise good consequences over dubious means, at least sometimes.

For the moralist, cases where we ought to tolerate politicians engaging in dirty deals for good ends will be rarer, but will nonetheless exist. We ought to judge the politician here by the same standards as we judge the regular person.

For the realist, who holds that politics has its own set of ethical standards, we can judge the sleazy politician when this behaviour gets in the way of their political goals – but not for the sleaze itself.

We should assess the politician on their adherence to politics’ internal standards (including their ability to competently engage in dirty dealings), without reference to the ethics they display in their personal life.

A good example here would be John F. Kennedy, who is generally thought of as a competent politician, but with a very chaotic (and unethical) personal life. However, he is the exception. It is more likely that someone with an unethical private life would carry this behaviour into their politics. For example, using their office for self-interested ends, enriching themselves and improperly advancing their friends and lovers.

For the moralist, sleaze matters, as poor ethical judgment and character in everyday life is evidence of poor ethics in political life. This view was famously expressed by Thomas Jefferson, who claimed:

I never did or countenanced, in public life, a single act inconsistent with the strictest good faith; having never believed there was one code of morality for a public and another for a private man.

The ethical debate between the two approaches is not going to be settled anytime soon. But we might question whether the realist view of a “good” politician – one who is good at making dirty deals and engages in sleazy behaviour only in their personal life – can really exist.

Politicians who are unethical in their personal life but not in office are rare. Bad ethical character can get in the way of competence, and politicians are no more able than the rest of us to turn their character traits on and off at work. It may be the moralists then, not the realists, who are being realistic when they take private ethical character as an indicator of how politicians will behave in office.

Joshua Hobbs does not work for, consult, own shares in or receive funding from any company or organisation that would benefit from this article, and has disclosed no relevant affiliations beyond their academic appointment.