Monkeypox: an expert explains what gay and bisexual men need to know 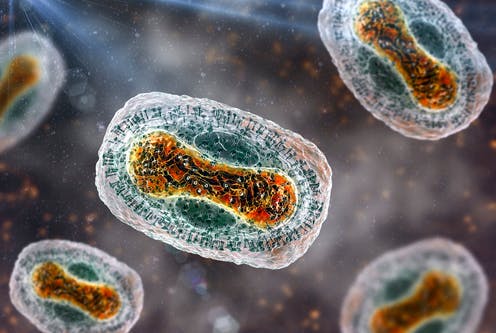 Since early May, more than 23,000 cases of monkeypox have been reported worldwide. This is the largest ever global outbreak of the disease.

Cases have now been reported in 78 countries including the UK, Spain, Germany, France, the US and Brazil. Given the scale of the outbreak, the World Health Organization (WHO) has now declared the current monkeypox epidemic a global health emergency.

While anyone can get monkeypox, the current outbreak is overwhelmingly affecting sexually active gay, bisexual and other men who have sex with men. In fact, our recent study which looked at 528 monkeypox infections since the start of the outbreak found that 98% of these infections had occurred in this group. Here’s what these men need to know.

Monkeypox is a disease caused by infection with the human monkeypox virus, which comes from the same virus family as smallpox. In fact, symptoms are quite similar to smallpox and include fever, headache, muscle aches, chills, cold symptoms (such as a cough or sore throat).

Symptoms are also accompanied by a rash that appears in blisters on the face, genitals, the chest and back, and on the hands and feet. Some people also experience very painful sores in the mouth or inside the bottom. For most people, the disease usually resolves within two to three weeks.

Monkeypox spreads through close physical contact with an infected person. Typically this means skin-to-skin contact, especially contact with the rashes and skin lesions caused by the disease. But it can also be spread through large respiratory droplets (such as coughing and sneezing).

It can also spread through contact with bed sheets, towels or other fabrics that have come in contact with the infected person’s sores. We know that the virus can persist on surfaces for a long time – sometimes up to several weeks.

According to our study, 95% of monkeypox infections so far were spread as a result of sexual contact. Around 95% of the people in our study had a rash, mostly occurring on the genitals. Approximately 41% had sores inside the body (including in the anus or mouth).

Our research also revealed that the monkeypox virus was found in more than 90% of the semen samples we tested. However, we don’t yet know whether the virus is infectious in semen.

All this may explain why the virus is primarily spreading through networks of men who have sex with men.

It’s worth stressing the virus can spread through any contact with lesions or large respiratory droplets from an infected person. This means that it can spread in households through any close personal contact with an infected person – not just as a result of sexual intimacy. However, during the current outbreak, our study suggests that this kind of non-sexual transmission has so far occurred very rarely, in less than 1% of cases.

Many countries are offering vaccinations to sexually active gay and bisexual men who are at greatest risk of contracting the disease. Used prior to exposure, research suggests the vaccine can provide around 85% protection from infection. If given between four and 14 days after exposure to monkeypox, the vaccine may potentially reduce symptoms of the disease.

The WHO has also recommended that at-risk groups limit how many sexual partners they have and take steps to protect themselves from contact. However, recommending abstinence really doesn’t go far enough, especially given we already have a vaccine which can prevent monkeypox. This is why getting vaccinated (and making sure that everyone has equal access to these vaccines) is of such great importance.

Given that the epidemic at this time is affecting almost exclusively men who have sex with men, directing accurate and relevant public health messages and working together with the community to develop acceptable interventions is what’s needed to help prevent harm and further spread.

One of the difficulties is that gay and bisexual men represent a marginalised community that has already faced stigmatisation and discrimination, particularly during the HIV/Aids pandemic. Nobody wants to repeat that.

But public health messages are most effective when targeted at people who are most at risk of a particular condition. Some even argue that messaging hasn’t been targeted enough during this outbreak.

Although public health agencies such as the WHO, CDC, ECDC and UKHSA have already done a lot to provide clear, non-stigmatising guidance to at-risk groups, it may be important ensure this information is now disseminated in places where they will have the greatest impact – such as on dating apps, for example.

There’s a small window to contain the spread of monkeypox – and it may have already closed. There are already reports of infections in both women and children. But the fact that the disease still seems to primarily be occurring in one group means that, with the right interventions, the course of the outbreak could still be changed and that group protected.

The most important thing now is ensuring all countries have equal access to vaccines and treatment to protect against the further spread of infections. The declaration of a worldwide pandemic by the WHO will hopefully serve to co-ordinate the global response and open up the possibility of mass production of several vaccines with access for all. The question is whether it will be fast enough.

2022-08-03
Previous Post: The health of British bulldogs is nothing to be proud of
Next Post: What ethical standards should we hold politicians to? A philosopher explains two different approaches