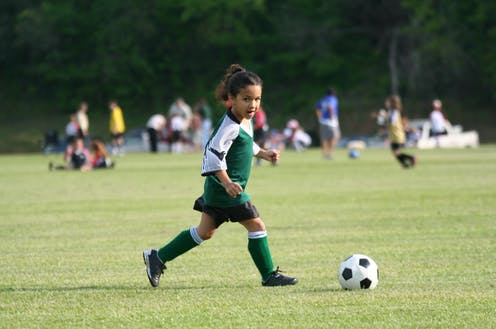 After England’s win at Euro 2022, many women, including the Lionesses themselves, have commented on the lack of football in their time at school. In fact, England Football, part of the Football Association, recently reported that only 44% of secondary schools in England offer equal football coaching to boys and girls.

But many people don’t have great memories of physical education (PE) in general.

When you think back to your school experience, do you remember having to run in the snow or pouring rain for cross country? Taking part in dodgeball and being hit in the face? The repetitive sound of the beep test? Or being split up from your friends who were able to do activities such as football that you desperately wanted to do, but couldn’t because of your gender?

When I give talks across England in my role as a PE specialist in teacher education, I am often approached by an influx of individuals that had negative PE experiences.

Problems such as everyday sexism and continued patriarchal values are played out in sports, PE and schools in general. And, as research suggests and those I’ve spoken to can attest, such issues can have a detrimental lifelong impact on a person’s relationship with exercise and sport. As such, PE needs to change for everyone.

The issues in PE

A narrow curriculum is often informed by teachers’ own sporting love affairs. This can be seen in the continued recycling of traditional sports, like football, rugby, cricket and athletics, for boys and dance, netball, rounders and athletics for girls.

This gendered and arguably sexist approach denies children opportunity, yet it continues in many schools in England today. This often also comes with ableist and elitist issues, such as putting children through gruelling fitness tests and judging them on how much they can perform certain techniques in order to separate them by physical ability.

Focusing each lesson on the technicality of the sport is arguably a very dated teaching approach. Having each lesson dictated by a teacher who demands a warm-up, skill practice then a game is not entirely inspirational or creative. Research suggests inspiring young people through a negotiated curriculum would be far more beneficial, giving young people choices in what they want to participate in and how.

As a detail in my recent, co-authored book, there are many other ways to make PE more modern and equitable. From my experience in working in countless schools, young people enjoy PE more when they have exposure to these types of practices.

But schools often don’t realise they are engaging in highly inequitable practices and offering little choice to students, because many teachers simply mimic their own experiences of PE. It’s also likely that these teachers haven’t been challenged throughout their teacher training to think differently.

So, instead of seeing that their role is to ensure all young people can find ways of enjoying movement that can be carried throughout life, they just continue the cycle of outdated and uninspiring PE. When a teacher who does want to shake things up comes along they can sometimes become immersed in dated practices championed by heads of departments who have a different agenda. A desire to create elite sport stars is perhaps the most common – not very inclusive for students.

Another issue affecting PE is that the purposes of different movement spaces have been blurred. For example, there are distinct differences between PE (learning in school time about all things physical), school sport (organised school fixtures perhaps for selected individuals), extracurricular clubs (for all students to engage in activities after school) and youth sport (outside of school). Each of these movement spaces serves a different purpose and the learning in each of them should be different.

As an example, you might learn in PE about calorie consumption myths and why they are far too simplistic based on our different lifestyle factors. You might also learn that you enjoy individual pursuits like swimming, parkour or rock climbing rather than invasion games, like football or netball. But in extracurricular clubs, young people might learn that they like exercising in the morning compared to after school or that being with friends who are not in their PE class makes exercising more fun.

Time to make a change

Spaces in which people move their bodies, like sports halls, gyms and swimming pools, are natural playgrounds that can inspire all sorts of skills like teamwork and camaraderie, respect and safety and can break down barriers of social inequality, such as gender stereotypes.

Where appropriate, schools should offer mixed-gendered PE classes that thrive on democractic values such as collaboration and equality rather than sexism and hierarchies. They should seek to provide young people with a range of culturally relevant options that go beyond traditional sports, in particular those that could be kept up throughout people’s lives: skateboarding, skipping, self defence or mountain biking.

Schools and specifically PE teachers have the power to make serious curriculum changes to provide all young people with engaging, enjoyable, and equitable spaces to move their bodies in activities that will encourage them to be lifelong movers.