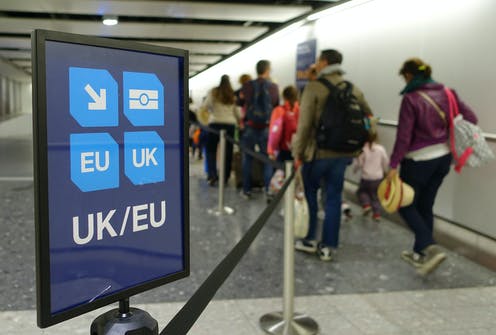 Brexit and the end of free movement between the UK and the EU has had notable consequences for family life, particularly for mixed British-European families whether they are living in the UK or Europe. Family members who before Brexit held common status as EU citizens now find they have different statuses and rights, both in the places they live and when it comes to mobility between locations.

We recently conducted a survey of British citizens living in the EU and EU/EEA plus non-EU/EEA citizens living in the UK (2,024 people in all), looking at migration and citizenship after Brexit. One fifth of the participants were in mixed-status British-European families. Of those, three quarters said their status difference had been a cause of concern. In their own words, here are four ways Brexit has affected British-European families.

1. Family members are newly dependent on one another

Spouses, parents and children are navigating domestic migration and citizenship legislation, often for the first time. No longer enjoying the same mobility and residence rights, in some families relationships suffer as they find themselves newly dependent on each other’s residency statuses. A British woman living in Spain described the effects of her children’s status differences following Brexit:

Brexit has also created inequalities between spouses and partners, making one person’s status dependent on the other’s. This emerges clearly in the words of a British woman living in Malta:

I am now dependent on my spouse’s status to reside in my home.

With their residence rights only secured in their current country of residence, British citizens living in the EU/EEA prior to the end of the Brexit transition period are no longer entitled to use free movement rights to move to another country in the bloc. Doing so now means complying with domestic immigration legislation in the destination country for themselves and for any non-EU/EEA citizen family members.

One British man in Italy highlighted how the changes in his status affected his non-EU/EEA partner’s rights and feelings about possibly moving to a different country:

My wife is a Russian citizen. Her residency and right to live and work depend upon my status under article 18 of the withdrawal agreement. The uncertainty delayed moving and even now, she fears a potential move to Germany as her residency rights are totally dependent on mine.

3. Moving from the UK to the EU has become more difficult

For British citizens who do not work, there are fewer routes to migrate from the UK to the EU. One route is through their status as family members of an EU citizen. Families are having to negotiate with each other, considering compromises and trade-offs, when dealing with this new reality.

As a Hungarian woman living in the UK explained, after Brexit she felt:

Forced to choose between me being a second-class citizen or my (British) husband risking not being able to get permanent residency and (…) receive a pension.

Familial negotiations might also reach an impasse, as a German woman in the UK anticipated:

I wish to leave but am stuck here because my children refuse to leave the UK. I intend to move when the youngest turns 18 – after that they are adults and have to take care of their own affairs. As my husband is a British citizen, he does not want to leave if it means that he has to become a third-country family member, meaning that our marriage (since 2003) will have to end.

4. Returning to the UK with non-British family members has become more complex

A common concern for British citizens living in the EU was whether they would be able to return to the UK with non-British family members, who are newly subject to immigration controls. There are many reasons why British-European families might want to relocate to the UK in the future, from providing elderly care to work and retirement.

As a British woman in France explained:

I can’t leave (France) for more than a few months if something happens to family overseas. My partner can’t come to the UK without applying for a visa even to care for a relative.

While for a British woman in the Netherlands:

We were planning to return to the UK on my husband’s retirement (around 2041) but now I think it is more likely we will stay in the Netherlands for the rest of our lives.

2022-07-29
Previous Post: 0.5 FTE Lecturer in Film and TV (Practice) at Falmouth University
Next Post: Your guide to All Points East and Field Day festivals at Victoria Park