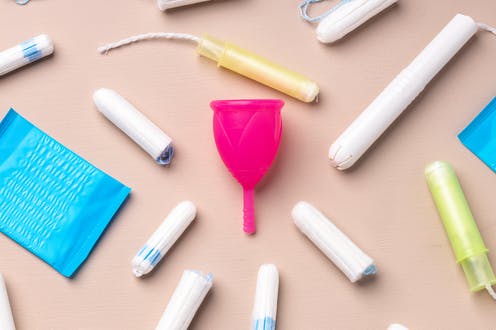 COVID has affected countless aspects of our lives. For many people who menstruate, one of the pandemic’s effects has been on periods. People have reported changes to their menstrual cycles after having COVID, from the timing of their period, to its duration, to bleeding (a heavier or lighter flow).

The researchers, based in the US, launched an online survey in April 2021, which was advertised through multiple channels, including TV news, Twitter, blogs and radio. The survey asked for demographic information and included questions about people’s periods, from symptoms to timing and bleeding duration.

It also asked about COVID vaccination status. For this analysis, all participants had been fully vaccinated, meaning they had received two doses at least 14 days before completing the survey (boosters were not yet available at the time). Most participants had received either the Pfizer or Moderna vaccines.

The results are based on responses from 39,000 people who regularly menstruate or who have done so in the past. The latter group could include people who have been through menopause, people receiving gender-affirming treatment, or people using hormonal contraceptives that suppress menstruation.

The study excluded anyone who had had COVID.

In the group who regularly menstruate, 42% reported a heavier period after their vaccine, 44% reported no change, and 14% reported a lighter period.

In the second group, two-thirds of post-menopausal participants and people on long-acting reversible contraceptives (such as IUDs and implants) reported breakthrough bleeding after COVID vaccination. Over one-third of those on gender-affirming treatment (which eliminates menstruation) experienced breakthrough bleeding.

What has other research found?

Other studies have also found changes in periods following vaccination.

For example, a study of almost 4,000 participants in the US found that after a second vaccine people started their period on average just over half a day later than expected.

A Norwegian study of more than 5,500 people found that over 7% of participants experienced heavier and longer periods after receiving their first COVID vaccine dose.

Similarly, a study of 2,269 women in the Middle East and north Africa found that women reported menstrual irregularities such as longer periods and longer cycles (more time between periods) after vaccination.

Reports of cycle changes after vaccination is not a new phenomenon. A 1913 study showed heavier bleeding after typhoid vaccination. Similarly, a 1982 study on hepatitis B and a more recent one on HPV found changes to menstrual cycles following vaccination.

We don’t yet fully understand the biological mechanism behind cycle changes linked to COVID vaccines. But changes to menstrual cycles usually stem from one of two routes: hormones or inflammation. A vaccine works by provoking the immune system to react to exposure to a disease, which can influence inflammation.

As the study didn’t find any differences between users of hormonal contraceptives (such as the pill) and non-users, the authors suggest the mechanism is likely to relate to inflammation rather than hormones.

The authors also suggest that menstrual changes could be due to the effect of the immune system on the uterus. In particular, the inflammation sparked by the vaccine could affect the uterine lining, leading to breakthrough bleeding. But this requires more research.

Whatever the case, changes to menstrual cycles after vaccination are short-lived. For most, cycles should return to normal within a few months.

Some things to keep in mind

While the effect of vaccines on periods is not an area that has traditionally attracted a lot of research, the issue has been brought into the spotlight by the scale and speed of the COVID vaccination campaign. Because more people are having similar symptoms at the same time, this leads to more attention and more research.

It’s important to note that this study cannot conclude that the vaccine causes menstrual changes. While it shows associations, to establish a causal link, we would need a clinical trial (so, to follow people who did and didn’t receive a COVID vaccine over a longer period of time). Indeed, the authors stress the importance of including questions about menstrual cycles in future vaccine research.

Further, the way participants were recruited in this study means the results should be interpreted with caution. People who saw changes in their period after vaccination might have been more inclined to respond to the survey, which could have skewed the results. Most of the participants were also white, so the results may not apply to racially diverse groups.

Read more:
How the pandemic has affected periods


This research should provide an impetus for further study and raise awareness of menstrual changes as a possible side-effect of COVID vaccination. The public should be made aware of possible side-effects, not because they’re dangerous, but because people need to know what to expect.

Just as you might have a painkiller on hand to take if you develop a headache after vaccination, some people may want to be prepared with extra menstrual products. Knowing what to expect could be especially useful for people who are no longer menstruating but may experience breakthrough bleeding following vaccination.

Gabriella Kountourides does not work for, consult, own shares in or receive funding from any company or organisation that would benefit from this article, and has disclosed no relevant affiliations beyond their academic appointment.