THE head of the World Health Organisation believes Covid DID leak from a lab in Wuhan after a “catastrophic accident” in 2019, it’s claimed.

A senior Government source told the Mail on Sunday that Tedros Adhanom Ghebreyesus privately confided in a European politician that he fears the virus escaped from the secretive site.

Work at the lab is shrouded in secrecy, although Donald Trump is among those to blame China for the pandemic[/caption]

The WHO publicly maintains that “all hypotheses remain on the table” when it comes to Covid’s origins.

The virus first took hold in Wuhan, and it was alleged early on in the pandemic that Western intelligence services were concerned about the city’s Institute of Virology.

Scientists at the lab are known to have studied coronaviruses found in bats living in caves 1,000 miles away. Covid is suspected to have originated in those caves. 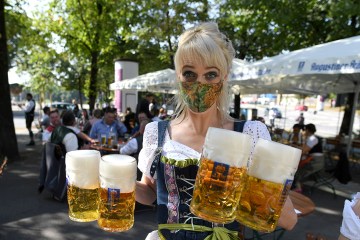 Beijing says any claim of a lab leak is just a “conspiracy theory”.

However, former president Donald Trump was among those to blame China for the virus.

Dr Tedros gave an update on the pandemic this month, admitting: “We do not yet have the answers as to where it came from or how it entered the human population.

“Understanding the origins of the virus is very important scientifically to prevent future epidemics and pandemics.

“But morally, we also owe it to all those who have suffered and died and their families. The longer it takes, the harder it becomes. We need to speed up and act with a sense of urgency.

“All hypotheses must remain on the table until we have evidence that enables us to rule certain hypotheses in or out.”

An original probe into the outbreak by the WHO was resisted fiercely by China.

A report following the investigation concluded the SARS-CoV-2 virus probably passed to humans from a bat via another unidentified species.

However, the document was blasted by 14 countries including the US and the UK, leading to Dr Tedros admitting its flaws.

American intelligence has placed the secretive Wuhan laboratory at the centre of its analysis.

Former US Secretary of State Mike Pompeo claimed that workers at the institute had fallen ill with Covid-like symptoms in autumn 2019 – weeks before the alarm was raised.

He said researchers were experimenting with coronaviruses as part of military projects.

A WHO spokesman said: “Dr Tedros has been consistently saying all hypotheses remain on the table as scientists pursue their work.”

In the past seven days, 269 people in England alone succumbed to the illness[/caption]

2022-06-18
Previous Post: Children as young as 6 months eligible for Covid shots in U.S., vaccinations to begin Tuesday
Next Post: Lecturer in Marine Biology (Maternity Cover) at University of Plymouth