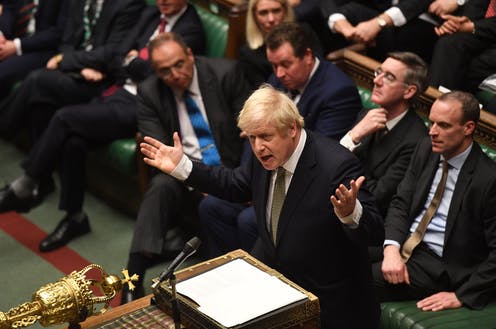 Former British prime minister David Cameron famously proclaimed in 2010 that the thought of giving prisoners the vote made him “physically ill”. Cameron argued that “frankly, when people commit a crime and go to prison, they should lose their rights, including the right to vote”.

Cameron’s distress was, as he himself acknowledged, based on the idea that those who violate the laws of the realm should not have a say in how those laws are made.

Cameron, his MPs and the overwhelming majority of the House of Commons went on to vote the following year to uphold Britain’s ban on prisoners being allowed to vote. And while there has more recently been a move to give the vote to prisoners who are out on temporary licence, there has been no move to repeal the ban for the vast majority of the incarcerated population. The position appears fixed.

But is there not a contradiction in this position if Conservative MPs also uphold the right of current prime minister, Boris Johnson, to continue not just to make laws as an MP, but even to head the government?

It’s an especially pertinent question as Conservatives MPs ponder Johnson’s future in the wake of the partygate revelations. It is for them to decide whether he should keep his job after being fined by police for breaking lockdown rules during the pandemic. It is for them to vote on whether he should face a leadership challenge. They necessarily find themselves in a position that calls on them to reflect on the relationship between rights and responsibility. The comparison with prisoners is a useful one for their deliberations.

The idea behind disenfranchising prisoners is generally that those who claim the right to exercise political power – in this case by voting – can have that right only on the condition that they are prepared to assume certain responsibilities.

Many people think that this is a poor or insufficient argument for removing the right to vote. No one signs a social contract, and most people have little choice as to which state they live in. The right to vote is so fundamental to political identity, they claim, that removing it creates a category of second-class citizens. Thus while the idea clearly has some intuitive force, philosophers who have scrutinised it have not always found its application to prisoners voting entirely convincing.

Nevertheless, many Conservative MPs voted to uphold the ban, and so they presumably did think that rights to political participation are conditional on upholding responsibilities. When it comes to Johnson, however, those MPs who voted on the ban back then – and those who have entered parliament subsequently but done nothing to remove it – seem to be sacrificing that high point of principle.

Johnson has not received a prison sentence but he has broken the laws restricting social gatherings that were devised by his own government. He has received a police fine for attending one event and there are multiple photos of him attending others. There is a strong suspicion that he has violated the ministerial code and misled parliament. And there are doubts, to say the least, about the sincerity of the apologies he has offered for doing these things. Johnson’s actions appear to have demonstrate a highly disrespectful attitude for law.

It should also be noted that the right that he claims is not simply to participate in voting – he claims the right to head the government, the supreme law and policymaking agency in the UK’s political landscape.

Conservative MPs have to ask themselves whether, if rights entail responsibilities, the standards to which we hold those who claim weighty rights like those of being prime minister should not be held to a weighty and strict set of responsibilities.

Maybe Conservative MPs could say that these arguments apply to prisoners but do not apply in the case of Johnson. I doubt it. One of the most influential arguments in the prisoner voting debate is the claim that the integrity of the democratic process needs to be protected from those who would abuse it.

The idea here would be that those who are in prison have shown themselves to be of sufficiently bad character that they are not to be trusted with the vote. This argument is doubtful given the tiny influence any individual prisoner has on the democratic process. If this argument has any merit, it surely applies much more strongly when the influence the offender has on the democratic process is as great as that given to a prime minister.

Admittedly, we would need more evidence than an isolated incident of criminal wrongdoing to show that a person cannot be trusted with the vote. We would need evidence of a more general disrespect for the law. Again, Conservative MPs should consider whether this condition has been met by their prime minister.

Johnson has not committed a serious enough crime to be sent to prison but the argument here is not that he should be denied the right to vote. The question is rather whether those Conservative MPs who accept that there is an important sense in which “with freedom comes responsibilities” should also agree that a person who has great freedom – the freedom to make weighty decisions on behalf of UK citizens – should not also be held to great responsibility.

It is the question whether the position of UK prime minister does not require basic respect for the law and the values that underpin it.

Christopher Bennett does not work for, consult, own shares in or receive funding from any company or organisation that would benefit from this article, and has disclosed no relevant affiliations beyond their academic appointment.

2022-06-03
Previous Post: Where is Prince Andrew today?
Next Post: Why the Apple and Google app store monopoly could soon be over