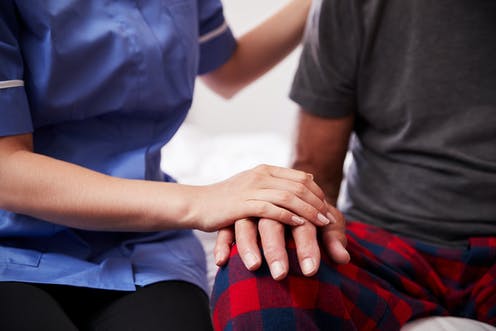 Across the world, compulsory powers are used to detain and treat people deemed to have mental health problems. In the UK, most people experiencing such problems receive treatment voluntarily, in the community. However, at times of acute mental health crisis, some may be compulsorily detained in the interests of their own health or safety, or for the protection of other people.

In England and Wales, decisions about whether or not to detain are normally made by an approved mental health professional and two doctors. These decisions are ethically challenging, because they involve removing a person’s autonomy. They allow them to be detained and to be given medication against their will.

In the Queen’s speech 2022, Boris Johnson re-stated his government’s intention to reform the Mental Health Act. “Our mental health laws are antiquated,” Johnson said ahead of the speech. “Every person deserves to be treated with dignity, and it is our duty to ensure that the rights and freedoms of our most vulnerable in society are protected and respected”. While many of the measures he announced are laudable, better resources and funding will be required for them to be effective.

How we think about mental health is changing

Changes in mental health law reflect our evolving attitudes to people with mental health problems. On the one hand, the law allows for professionals to give people treatment against their will and to deprive them of their liberty when the conditions of the Mental Health Act are met. On the other hand, it can provide people who use mental health services with rights and protections to ensure that they are not detained without good reason and to enable them to receive the treatment they want.

The government’s plans to reform the Mental Health Act were first published in 2021. This followed a government-commissioned independent review, which recognised the importance of human rights in mental health care. It highlighted the need to restore dignity and enable service users to participate in decisions about their own care.

The subsequent white paper noted widespread concerns about rising detention rates, citing a 40% increase between 2006 and 2016. It acknowledged that black people were much more likely to be detained under the Mental Health Act and discharged under a community treatment order (these orders mean that people should be treated in the community after leaving hospital, but the doctor in charge of their care can return them to hospital for treatment if necessary). It also included concerns about the way that people with learning disabilities and autistic people are treated under the Mental Health Act.

Reforms were last introduced in 2007 by the New Labour government. They were driven by the assumed need to manage risks of violence posed by mentally ill people living in the community and alleviate public concerns about this. The changes gave mental health professionals more control by expanding detention criteria and introducing community treatment orders.

The government aims to increase the threshold for admission, so that people are only involuntarily detained where it is strictly necessary. Changes to the admission criteria are also set to limit the use of the legislation for autistic people and people with a learning disability. And existing safeguards in the Mental Health Act will be strengthened, for example, by giving patients the right to formally challenge detention more frequently, via mental health tribunals.

Other new measures to promote autonomy include giving patients better support, by offering detained people the option of an independent advocate (a paid professional who can speak on their behalf) and by allowing people to choose their own “nominated person”. This new role replaces the “nearest relative” role, as specified in the current version of the act. Currently, a family member is selected from a fixed list and given certain powers to object to detention or apply for discharge. This has been criticised for not allowing people to choose who they would like to represent them.

Reforms will need proper resources to be effective

While rebalancing the powers granted to professionals and the rights of the people who use mental health service is important, these tabled reforms leave several questions unanswered. The new nominated person role, in particular, is welcome. However, our research shows that nearest relatives feel emotionally unsupported and unsure about how to use their legal powers to protect their relative’s rights. Education and support to nominated persons must be provided if the role is to be effective.

Further, the House of Commons Health and Social Care Committee has said that restrictions on detaining autistic people and people with a learning disability in hospital will only succeed if they are accompanied by significant improvements to the community support people can access.

Giving detained people increased rights to mental health tribunals and advocacy is laudable in theory. It will however also need resourcing. Research indicates that while advocacy services have increasingly been promised, government evaluations have highlighted that the provision of advocacy services varies widely across geographical areas.

Finally, research has shown that people are more likely to be detained when they are experiencing economic deprivation. The proposed reforms do not specifically address this, although they are accompanied by wider system supports and investment, for example in schools, maternity services and for groups most affected by the pandemic. The government’s wider levelling-up policy is also set to include a new mental health plan.

The government has promised service users more rights. These new safeguards will be tokenistic, however, without being properly resourced and supported on the ground.

Jeremy Dixon receives funding from the National Institute for Health and Care Research.