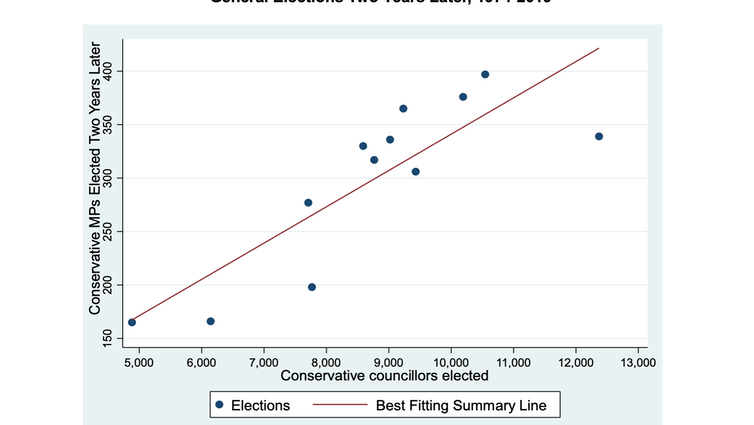 The Conservatives ended up with a net loss of 487 seats in the May 5 local elections. Labour gained 108 and the Liberal Democrats 223.

The scale of the Conservative losses has led to speculation that prime minister Boris Johnson’s majority could be in jeopardy at the next general election – due to take place in 2024 at the latest.

It should be noted that turnouts are much lower in local elections compared with general elections and that local contests do not take part in all parts of the country at the same time. That means we are not comparing like with like here. However, historical data does suggest that when parties fare badly in a midterm local election, they do indeed go on to do badly in a general election.

Why is this relationship so close? The principal reason is that there is a lot of inertia in electoral politics, even though volatility in voting behaviour is growing over time. Parties generally spend a long time in opposition before defeating the incumbent party of government in a general election. Local elections are the canary in the coalmine when it comes to signalling such defeats.

The strong correlation means we can use the seat shares in the May 5 local elections to predict the seat shares in the next general election. If we analyse this relationship using a statistical technique called multiple regression, we find that for every 100 Conservative councillors elected in total this year we can expect about four Conservative MPs to be elected in two years time. This, of course, works in reverse, making it possible to forecast the effects of the loss of Conservative seats in local government this year on the party’s performance in a 2024 general election.

The forecast is that the Conservatives will win 243 seats in the House of Commons in that general election if the relationship holds up. In other words. they will lose 122 seats compared with 2019.

That said, there is a problem that the forecast is based on very few cases and so it is subject to wide margins of error. This error means that there is a 95% chance that the party will win between 193 and 293 seats in that election, so the prediction is not very precise. However, the important point is that even the most optimistic forecast of 293 seats won is well below the 326 seats needed to form a majority. It looks like British politics is in for another sea change in the next election.

2022-05-12
Previous Post: Keir Starmer and lockdown rules: what the law actually said about gatherings in April 2021
Next Post: Lugano Ties Its Crypto City Dream to Tether