YAYA YOURE is reportedly set to meet Tottenham for talks over a potential coaching role.

Toure, 38, has been studying for his coaching badges with Spurs’ U18s since December.

And the Standard claims the Manchester City legend is now looking to land a full-time coaching position as he closes in on his Uefa A licence.

Tottenham chiefs have been impressed by Toure, who has previously worked in Ukraine with Olimpik Donetsk and in Russia at Akhmat Grozny.

The former Ivory Coast midfielder has already upped his involvement at Spurs, having started working just one day a week.

And the Londoners are now ready to meet Toure for talks with a view to offering him a full-time job. 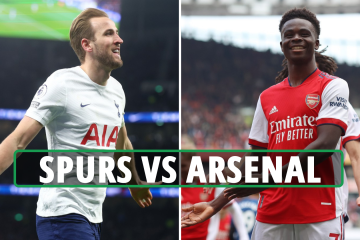 Arsenal boss Mikel Arteta has already expressed an interest in working with ex-Barcelona star Toure, whose brother Kolo is a first-team coach at Leicester.

But wherever he ends up, the iconic playmaker will be hoping for some much-deserved credit after claiming last month that “nobody praised” his playing career.

He also scored an impressive 79 goals across 316 games.

Yet Toure insists he’s still “unhappy” with how things panned out.

Toure said: “When I arrived at City, people said I was killing football and my salary was a disgrace.

“But everyone can see what happened. We won virtually everything yet I got no recognition for it.

“Everybody thinks I am happy because I won trophies and earned a lot of money, but no I’m not happy.

“I scored lots of goals in the Premier League and nobody said anything.

“They have to understand how that is disappointing for me. When things go badly everything gets exaggerated.

“But nothing gets said if I do my job well.”

2022-05-10
Previous Post: An Oklahoma abortion clinic was a safe haven for women fleeing Texas ban. It will shut down if Roe falls
Next Post: Gardaí appeal for information after woman killed in violent circumstances in Dublin