JUST over a week ago Burnley were proudly trumpeting that nearly 12,500 fans had already bought season tickets for next season.

Owner Alan Pace may as well save himself the postage…because half of them will be going straight back.

Even in the crazy, chaotic world of football, Pace’s madcap decision to pull the trigger on Sean Dyche’s ten-year reign is the most illogical and ill-conceived of all.

It’s the sort of move that makes you think those who dismiss Americans as knowing the square root of f*** all about football do indeed have a point.

In sacking Dyche, owner Pace hasn’t just got rid of a manager, he has sealed their relegation a month early.

He hasn’t just got rid of a manager, but ripped the heart and soul not merely from the football club, but the town itself. 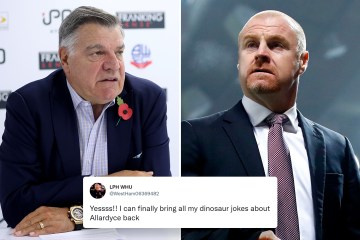 Dyche will never be the hipsters’ choice. He will never tick any boxes for buzzwords and soundbites, for corporate speak and crap.

He is what everyone with any knowledge and love of this game calls a “proper” football man. Calls a spade a shovel, rolls his sleeves up, and gets on with the job.

And what a job it has been. Working with a budget most Championship clubs would roll their eyes at, he took Burnley into the Premier League and kept them there for six years.

He took journeymen and cast-offs, and transformed them into internationals. Men like Jack Cork, James Tarkowski, Nick Pope…the list goes on.

Of course there is talent in the ranks, but only to a point. Beyond that it has been spirit, heart, togetherness, unity which has kept them punching above their weight.

It is hard to think of a club with such a family feel as Burnley. They were once likened to Wimbledon’s Crazy Gang with class, and there is something in that.

Yes, they have struggled this season and may well have gone down even if Dyche had remained. But not without a hell of a fight.

For all last week’s loss at Norwich was a shocker, consider this. Had they won their two games in hand, they would have been three points behind Leeds…with a decent run-in, too.

Well thanks to Pace, there is no chance. If fans had doubts about him when he rode into town 16 months ago, they have none now – they know exactly what he is.

PACE OUT OF HIS DEPTH

When it comes to football, out of his depth is the phrase which comes to mind. Not that the American would accept it, of course.

Pace, you see, likes to be involved in everything at the club. Media, marketing…you name it, his finger is stuck deep in every pie.

Most of Burnley’s staff weren’t merely employees, they were lifelong fans. It doesn’t guarantee anything of course, but does mean going the extra mile is a given.

Slowly, systematically it is being dismantled. Taken apart by a man who simply doesn’t realise – or want to realise – how big an asset that is.

The first they heard of Dyche’s sacking came when the news was made public yesterday. You can imagine the reaction.

Whether the words “mutual consent” were mentioned or not, no-one knows. But if they were, you know damn well what the manager’s response would have been.

Along the lines of “if you’re sacking me, then say so. Don’t suggest I am turning my back on these supporters who have stuck with us through thick and thin.”

Rather than the bullet, they should be building a statue. The only way they’ll do likewise for Pace is to have something to throw eggs at. Rotten ones, at that…the whole thing stinks.

2022-04-15
Previous Post: The Great Escape 2022: Your guide to Brighton’s festival of new music
Next Post: WHO is tracking omicron BA.4 and BA.5 subvariants as they spread through Africa and Europe