Torrington Community unite in a bid to keep a painting in their town!   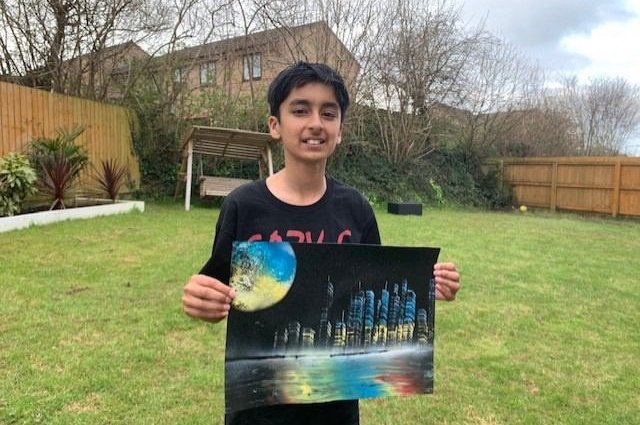 When 12-year-old Eashan Nijjar from Torrington offered one of his unique spray paintings for a charity auction set up to raise funds for Ukrainian refugees, he had no idea how his life would change by his kind gesture.

Anne Tattersall and husband Chris, who are sponsoring a family of four Ukrainian refugees wanted to raise funds for UK volunteers working on the ground in Warsaw who helped them connect with their family.  Anne set up an on-line auction site called, ‘North Devon Stand with Ukraine’ and has been overwhelmed with the generosity of the donations she has received from individuals and businesses in North Devon.  After Anne received Eashan’s painting she uploaded it to Facebook to showcase his talent and was immediately inundated with pledges of money from the community to ensure the painting stays in Torrington.  ‘It was an extraordinary response from the people of Torrington,’ said Anne and adds, ‘We even had a donation from an ex bank manager in Northern Ireland who thought it was a great idea to keep the painting in town as a historical reminder of how North Devon came together to help the Ukraine.’  In just two days the painting has raised over £300 and Anne is confident it will reach over £1,000.

After Eashan was interviewed by Mark Easton, home editor for the BBC, the talented young artist got the shock of his life and says. ‘I’ve always been inspired by Tom Wells, a famous spray painter who has over 800,00 followers on Tick Tock and was completely blown away when he rang my dad and asked to speak to me.’  Tom has given Eashan an open invitation to come to his gallery in South Devon where the pair will spend the day together sharing tips with each other.  ‘This is like a dream come true.’ Said Eashan.  ‘I just thought I had the perfect skills set to do a painting in the colours of Ukraine for Anne’s auction and I never for a minute thought I’d appear on national news and get to meet one of my art heroes.’

Anne would like to thank everyone who has donated auction prizes and is particularly grateful to local website designer, James Loud, who set up the ‘North Devon Stand with Ukraine’ auction site and to Fran from the Frame Warehouse Gallery in Barnstaple for framing Eashan’s painting.