How leaseholds bought at cost, with mortgages, are still tenancies – and why that should change 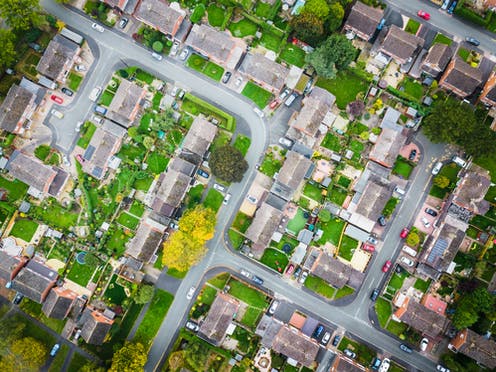 Long leasehold is a prominent feature of the property market in England and in Wales. Homes owned under leasehold in each country number around 4.6m and 235,000 respectively. (Scotland has a completely different law of property, while in Northern Ireland, the law of leasehold is regulated very differently.)

“Owned” here is a not strictly correct. A leasehold is in fact a tenancy, with all its connotations of short-termism and owing something to a landlord.

Owners of even long leases – what you get when you purchase a leasehold house or flat – are, technically speaking, tenants. This is so even though leasehold is a form of property ownership and the terms of long leases are typically 99 or even 999 years. Long leaseholders may be obliged to pay rent (labelled “ground rent”) and when the lease expires it reverts to the landlord. Consequently, this “reversion” can be and often is sold for money to investors. Indeed, leasehold has been abused by some landlords.

In order to tackle such abuses, there are a series of proposed reforms. But first consider why we have leasehold in the first place.

English and Welsh land law has always had technical defects which lawyers have tried to work around. Freehold is almost absolute ownership, so it cannot have a fixed term. Hence we have leasehold, which usefully provides this function.

The big defect with freehold is that it does not allow an owner to impose positive obligations over a neighbour’s freehold. In property terms, this means that if you are a freeholder, you can, for example, stop your neighbour from enlarging their buildings, but you cannot oblige them to maintain them.

Positive obligations are absolutely necessary when adjoining buildings have individual owners. In a terrace of houses, for example, each house must physically support the others: if one owner threatens this support by, for example, not maintaining their house, their neighbours must be able to take legal action to avoid their own building being ruined.

An uneasy collection of legal doctrines has solved this problem. But it goes no further than the obligation of support. It is of no use for flats where more complex obligations are required.

Leasehold presents a solution on both fronts. It permits positive obligations – thereby enabling owners to take legal action when neighbours do not fulfill their obligations – and it comes with a central managing authority: the landlord. So the lease was pressed into service by lawyers to solve these problems.

Even though a long lease is quantitatively different to a short lease (which is typically six or 12 months, in the residential sphere), the underlying legal device is the same. If properly set up and regulated, long leases are safe, durable and valuable. However, especially where there is a shortage of housing, landlords are in the economically stronger position and can bargain for terms that favour them. Lease terms continue to be short, often just 99 years.

Worse is the recent trend of imposing onerous ground rents. Unlike a service charge, ground rent is pure profit since it does not have to relate to maintenance.

Historically ground rent was set at very low levels in long leases. But we are now seeing ground rents starting low and doubling every ten years. The government’s consultation highlights the example of an initial rent of £295 on a flat purchased for £200,000. The rent doubled every ten years, reaching £9,440 per annum after 50 years.

Of course, leasehold is simply is not needed for houses at all. Indeed, the government has characterised new houses being unnecessarily sold as leasehold as “unscrupulous” and promised to prohibit new leasehold sales of houses.

In May 2021, the Leasehold Reform (Ground Rent Bill) was introduced, but it does not go this far. But it does aim to ban residential landlords from imposing any ground rents in new leases in most circumstances (excluding shared ownership and voluntary extensions of the lease’s duration). But the bill’s provisions are not retrospective. People already in this predicament will get no help from it.

Since 1967, qualifying owners have had a statutory right to buy out a house’s freehold (a mechanism called “enfranchisement”). But since the pricing formula is set to compensate the landlord for loss of income, it can be expensive. For instance, in the example above, the estimated cost was £35,000. Unsurprisingly, these leaseholds can be hard, if not impossible, to sell or mortgage.

But even with zero ground rent, if enfranchisement is delayed it can be expensive. For instance, a leasehold with 50 years left to run and worth £200,000 as a freehold could cost some £35,000 to enfranchise. This reflects the fact the landlord would otherwise eventually take the land back.

Thus there is still an incentive to create leasehold houses. Quite what effect eliminating ground rent income will have on this market remains to be seen.

For flats, matters are much more complicated. Freehold is inappropriate here, but leasehold brings additional problems due to that central management. Notwithstanding a limited right to enfranchisement and regulation over service charges and works, problems reported include high service charges, poor transparency over service, administration and lease-extension charges and attempts to thwart tenants from exercising their right to manage the block.

Leaseholders therefore endure as an imperfect workaround for some properties (flats) and an unnecessary one for others (houses). Legal experts have attempted to come up with alternatives, including the idea of commonhold, which was introduced as a more regulated option for flats in 2002. It flopped though, with fewer than 20 commonholds created. We can hope that the proposed reforms to commonhold will help. Until the regulation is good enough, buyer beware.

All values are merely indicative and should not be relied on. The bases of calculation reflect assumptions that might not apply to other circumstances.

Derek Whayman does not work for, consult, own shares in or receive funding from any company or organisation that would benefit from this article, and has disclosed no relevant affiliations beyond their academic appointment.