Ivermectin: misuse against COVID risks undermining its use for other diseases 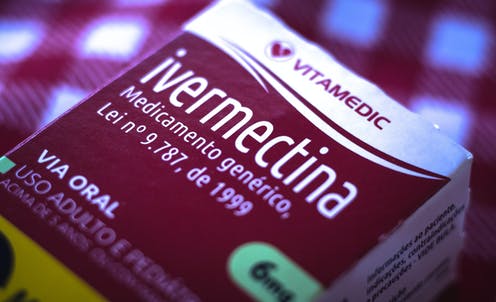 If you live in a western country, prior to the pandemic you probably hadn’t heard of the medicine ivermectin. It’s a very effective treatment for a number of neglected tropical diseases (NTDs). These are a group of debilitating infections that can cause chronic illness and death. They disproportionately affect the world’s most vulnerable and deprived people.

Examples of NTDs include lymphatic filariasis and onchocerciasis, two worm-based infections that are spread by mosquitoes, and scabies, which is spread by the infestation of the skin with mites. All of these can be treated with ivermectin.

Hundreds of millions of ivermectin doses are administered every year, mostly across lower-income countries. In 2020, the World Health Organization (WHO) published a new roadmap for bringing cases of NTDs down worldwide over the next decade, with ivermectin being integral to this. It will be used to prevent and treat NTDs across many countries, including through mass drug administration.

But during the pandemic, ivermectin has also been touted as a COVID treatment. Despite a lack of good evidence to back this up, some countries have recommended ivermectin as part of their pandemic response. Panama and other parts of Latin America, for example, have endorsed using the drug. So too did India, before the Indian Council of Medical Research specified that the evidence isn’t there to support its use.

A Cochrane Review – a reliable wide-ranging piece of research that analyses the results of many separate pieces of research on a topic – has concluded that the evidence available so far on using ivermectin to treat COVID patients, both inside and outside of hospital, is of low quality.

Other wide-ranging reviews have suggested that the drug is beneficial against COVID, but scientists have flagged that some of the papers covered by these reviews use data inappropriately, with some of the research possibly even being fraudulent. Because the research these reviews are assessing isn’t rigorous, any suggestions they make about benefits aren’t robust.

The WHO has therefore advised that ivermectin shouldn’t be used as part of routine clinical practice when treating COVID. The drug’s manufacturer, Merck, has added that there’s “no meaningful evidence for clinical activity or clinical efficacy in patients with COVID-19 disease”.

But this hasn’t dampened support for ivermectin. There are many online groups calling for it to be used against COVID, and people around the world are buying the drug directly for this purpose.

This, my colleagues and I argue, leads us into a dangerous situation. Any health intervention depends upon high trust and uptake for success. If people consider ivermectin to be a COVID treatment, then there is a risk that these perceptions may lower trust in the drug as a way of treating NTDs.

For instance, people taking the drug without medical supervision to try to treat or prevent COVID have experienced vomiting, diarrhoea, seizures, dizziness and rashes. This may be because they have overdosed – so wouldn’t indicate a problem with the drug – but nevertheless risks undermining ivermectin’s perceived safety.

Reports of illness after taking ivermectin could have dangerous consequences. Even before the pandemic, in the UK there were rumours about ivermectin that have proven hard to dispel. These concerned the safety of using the drug to treat scabies infections in the elderly. Despite these claims being unsubstantiated, they still deter clinicians from using the drug. Fake news can be hard to fully correct, and could be even more so if negative perceptions build.

Conflicting messaging can also be a problem. Its use for COVID being disputed, and it being endorsed by the WHO as an NTD treatment but rejected as a COVID treatment, could lead to doubts and misinformation surrounding the drug. Once misinformation is released, it can easily spread. It then takes resources to address and correct false claims that are made. In lower-income settings, such resources will be in short supply.

High uptake is key against NTDs

If there’s significant mistrust in public health programmes that use ivermectin, then the targeted elimination of some NTDs becomes very unlikely. These programmes often revolve around mass administration of the drug, and so are only highly successful in reducing the burden of disease when there’s high uptake.

Success can be limited if there is frequent non-adherence to treatment programmes. This can be an issue when rumours (typically around side-effects) are common.

The WHO’s NTD roadmap has a target to globally eliminate lymphatic filariasis as a public health problem by 2030. There are 17 countries – including Togo, Malawi and Sri Lanka – that have so far used mass administration of ivermectin to successfully eliminate the disease. Other countries are probably going to need to use the drug the same way – but could struggle to stamp the disease out if reports of side-effects or seemingly conflicting advice about the treatment deter people from taking it.

Ivermectin is an excellent medicine. Appropriate use of it will be vital to lowering the burden of NTDs and hitting the targets within the WHO’s roadmap. But to make sure its usefulness isn’t undermined, trust in the drug must not be threatened – and this means its misuse as a COVID treatment needs to end.

Michael Head has received funding from the Bill & Melinda Gates Foundation and the UK Department for International Development.

2021-10-28
Previous Post: WitchTok: the rise of the occult on social media has eerie parallels with the 16th century
Next Post: Silvestre is obviously looking forward to a ‘Night of Luxury!’