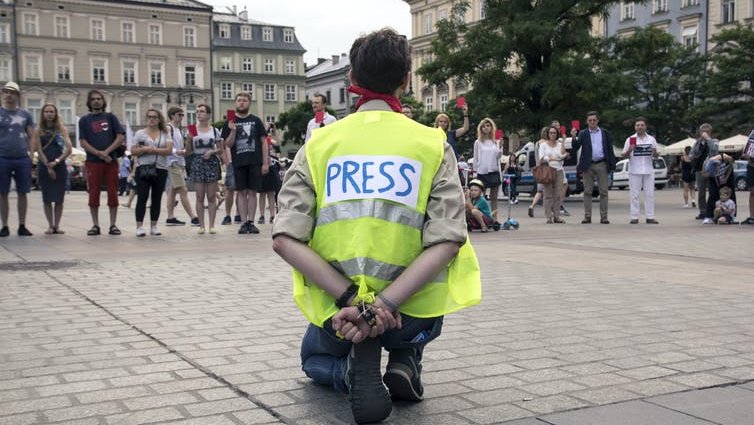 A type of legal action is increasingly being used by powerful people to shut down criticism from activists, academics, whistleblowers, and journalists. This is known as a strategic lawsuit against public participation, or Slapp.

At the time of her assassination in 2017, Maltese investigative journalist Daphne Caruana Galizia was facing 47 civil and criminal libel suits, filed in various jurisdictions from Malta to the UK and the US.

And in Poland, the country’s second largest daily newspaper, Gazeta Wyborcza, has received over 55 legal threats since the Law and Justice party (PiS) came to power in 2015. The Polish cases are brought by the deputy prime minister and PiS chairman Jarosław Kaczyński and other powerful people with ties to the governing party.

Slapps are used to try to prevent the public from learning about matters of public interest that could harm the reputation of a company or government. They typically take the form of defamation lawsuits but, very often, the companies or individuals who start these claims know they will never win. Rather, the aim of the claim (and this is what makes it a Slapp) is to dissuade journalists from reporting on a controversial story by making it as costly and time-consuming as possible.

People or organisations who instigate Slapps are often powerful and well funded, while defendants tend to be people and organisations with significantly less resources and influence. This is especially concerning when you consider that many independent journalists who bring attention to complex issues or scandals do not have the financial and legal support of a major media company behind them.

The effect of defamation complaints on freedom of speech is illustrated by recent comments by the website openDemocracy about a legal action pursued against them by Jeffery Donaldson, the now Democratic Unionist Party leader over a story they published.

openDemocracy said: “Those two years cost us a lot. We spent months dealing with legal letters, burning through thousands of pounds and precious time that would otherwise have been spent on our journalism. The psychological toll was even higher.” The case never went to court.

If this is not concerning enough, what is even more worrying for the public is what we do not get to read about as a result of Slapps, such as the blocked UK publication of Karen Dawisha’s book Putin’s Kleptocracy.

In Canada and in some US states, such as California, anti-Slapp legislation and well-developed case law have existed for a number of years to restrict their deployment and protect free speech. In the European Union, and the UK, where no such laws exist, the increasing use of Slapps has worried civil rights activists and journalists, and there are now attempts to introduce in similar legislation in both places.

Initiatives to monitor and combat Slapps are now being launched across Europe. For example, the Coalition Against Slapps in Europe, launched in March 2021, and saw 106 civil society organisations sign a public call for the Council of Europe to take steps to combat Slapps.

Another initiative launched in December 2020 is pushing for the adoption of a European Union directive to combat Slapps. And in June 2021, a study commissioned by the European Parliament’s Policy Department for Citizens’ Rights and Constitutional Affairs recommended the adoption of an anti-Slapp directive, and changes to EU law to limit the damage being done by Slapps.

Slapps have also reached UK shores. A November 2020 report from the Foreign Policy Centre, which surveyed European investigative journalists covering crime and corruption, found that the UK was by far the most frequent international country of origin for legal threats after the journalists’ home countries. The report also found that legal threats were more likely to effect the journalists’ ability to continue working than psychosocial, physical or digital threats.

In January 2021, the UK Anti-Slapp Coalition was formed by 22 organisations. They recently published a joint policy paper countering legal intimidation and Slapps in the UK. It calls for a formal UK parliamentary inquiry to examine this issue, including its effect on public debate and discussion, and to consider a UK anti-Slapp law. According to the paper, such a law should have, among others, the following components:

Slapps pose a threat to democracy that we should all be concerned about.

Peter Coe does not work for, consult, own shares in or receive funding from any company or organisation that would benefit from this article, and has disclosed no relevant affiliations beyond their academic appointment.